John Thomas Shepheard was born in Nottingham, England in 1861.
By 1871 it seems the family had migrated to Western Australia.

John Shepheard is first recorded at Roebourne in 1889 aged 28, having been a lucky prospector finding four ounces of gold close to Roebourne.
Prior to this account he is mentioned as being involved in the North West pearling trade.
By 1890 he is seen as having a trade as both butcher and hotel keeper in Roebourne.
In October, 1890 he is recorded in advertising as the proprietor (licensee) of the Roebourne Hotel commencing there October 18, 1890.
On February 4, 1891, Shepheard married Louisa Catherine Simpson of Geraldton, at Geraldton and by December, 1893 the Shepheard family had moved to Geraldton.
Certainly the weather conditions and surrounds of Roebourne and Cossack were not ideal to raise a family.

At Geraldton J.T. Shepheard set about building an aerated water factory in Fitzgerald Street and this is seen to be operational by 3 January, 1894.

At the opening of the factory Shepheard was producing Soda Water, Ginger Ale, Lemonade, Cordials, Fruit Champagne, Dandelion Ale, Ginger Beer and Horehound Beer.
The factory was known as The Star Mineral Water Factory and Shepheard advertised extensively throughout 1894 but little thereafter as it seems he had become well established.
Shepheard had obviously planned wisely from his hotel and aerated water manufacturing time in Roebourne.
He had set about getting glass bottle stocks from England and all his bottles have a Star as Trade Mark.
This would have been pre-planned as to order these bottles, have them manufactured then shipped from England would have taken some time. The earliest of these glass bottles appear to be cork stoppered blue and clear Hamilton’s (torpedos) and cork stoppered Cylinder bottles (see photos).
Early marble bottles by Dan Rylands include some with blue marbles.
It would seem Shepheard copied the blue Hamilton’s of William Jose of Geraldton as that company was already well established.

The town of Mullewa situated 55 miles north east of Geraldton was gazetted as a townsite 13 July, 1894.
John Shepheard is recorded in Wise’s Postal Directories as being an aerated water manufacturer in Mullewa from 1895 to 1897, however, there appears to be no advertising or other recorded evidence to show that he operated out of Mullewa.
Most likely he supplied aerated waters and cordials to Mullewa from his Geraldton Fitzgerald Street factory.

Tragically and quite suddenly at just 39 John Thomas Shepheard died of a brain fever (encephalitis) on 10 February, 1901.
Married just 10 years his wife Louisa, widowed at 31 was left to raise three children, Ivy Linda (9), John McKenzie (7) and Leonard Wisbey just two. Along with this was the burden to run the Star Factory.

Wise’s Postal Directories show Mrs L.C. Shepheard running the Fitzgerald Street aerated water factory from 1902 to 1919 and also listed as Shepheard & Co (J T) from 1918 to 1923.
George Frederick Warwicker is recorded in his Obituary as hotel keeper of the Murchison Inn, Geraldton and is said to be engaged 20 years at L.C. Shepheard’s factory as employee and Manager after 1901.
His actual time at Shepheard’s is uncertain as he is seen at times working elsewhere around Geraldton during that period.

By April, 1910 Louisa Shepheard was seeking tenders for two storey extensions to her house and additions to the aerated water factory.
In April, 1911 by Public Notice L.C. Shepheard transferred her interests in the Star Mineral Water & Cordial Factory to Arthur Rymer of Sandstone and Maninga Marley.
This arrangement did not last long and by July, 1913 Arthur Rymer is seen to be engaged as a Pastoral Lease Manager.
With the demise of the Forman & Bone aerated water factory in Day Dawn during 1912, Walter Forman moved to Geraldton where by September, 1913 he is seen to be running the Star Factory for L.C. Shepheard (see Advert) and this continued from 1913 to 1921.
Walter Forman engaged Bendigo Pottery to make him 1728 (12 gross) of W. Forman tan top champagne ceramic ginger beers but these did not show the Star Trade Mark.
The order was recorded by Bendigo Pottery as October, 1915.
By December, 1916 Forman was advertising Horehound Beer, Trilby Ale, Ginger Beer, Lemonade, Ginger Ale, Kola, Lime Juice & Soda but still not with the Star Trade Mark.

By November, 1917 Forman had moved his interests into the catering business along with continuing his aerated water trade.
This was in conjunction with his new wife Annie.
He had moved his disused Day Dawn Aerated Water Factory, both building and equipment to Eleanor Street, Geraldton.
This may explain why Louisa Shepheard had control of the Star Factory property.
Under the name Shepheard & Co (JT) she engaged Bendigo Pottery to make her 720 (5 gross) of tan top dump corker ceramic ginger beers with the name J.T. Shepheard Geraldton and showing the Star Trade Mark.
This order is dated November, 1918.
There is no evidence of the existence of any other Shepheard stone ginger beer bottles made prior to 1918.

Married just four years, sadly Walter Thomas Forman passed away aged 50 in March, 1920.
By May, 1922 Forman’s aerated water business in Eleanor Street was acquired by Chapman & Jose of the Trefusis Factory.
They were running their well established business in Francis Street, Geraldton.
Seen in the same notice, Shepheard & Co shifted their factory from Fitzgerald Street to the Eleanor Street factory.
So it would seem Chapman & Jose wanted Forman’s equipment and bottle stocks.
In any event Louisa Shepheard was preparing to sell and by October, 1923 she transferred the now Eleanor Street Star Factory to Samuel Henry Waltho.
He was a brewer at Mount Magnet around 1901 and 1902 and then was seen as a carrier working at and around East Perth for some time before moving to Geraldton.

Samuel Waltho and his son Henry engaged Bendigo Pottery to make them 1440 (10 gross) of tan top champagne crown seal stone ginger beer bottles. These showed the traditional Star Trade Mark and Star Works embossing. The consignment was dated August, 1924.
In later years Henry recalled the family had purchased a quantity of other stone ginger beer bottles from another manufacturer around the same time.
This consignment of bottles was found to be pervious and failed to hold the ginger beer and no matter what they tried they could not get them to seal. This was a setback and the entire stock from this manufacturer was said to have been dumped after the first filling.
They continued on with the Bendigo stock and also used marble bottles with the star trade mark.
On the 12th February, 1929 Samuel Waltho passed away and Henry now aged 29 took over the running of the factory.

Meanwhile in nearby Mullewa, Samuel Yoxall had set up an aerated water factory around 1930 (see Little Bottler Volume 36 No 4).
On 12 November, 1932 Samuel Yoxall of Mullewa purchased the Star Works factory from Waltho.
Henry Waltho moved to Midland Junction and took over the Wattle Aerated Water Factory (see Little Bottler Volume 37 No 6).
Yoxall had taken the opportunity to establish a branch in Geraldton (see Little Bottler Vol 36 No 4).
He engaged Mauri Bros & Thompson of Sydney to produce an undisclosed number of tan top crown seal ginger beer bottles embossed Geraldton but these did not show the star trade mark.
Yoxall remained in Mullewa right through till around 1946, however he never appeared to have any Mullewa embossed bottles showing his own name nor any embossed Geraldton glass bottles.
The effect of the depression may have meant all glass bottles used were paper labelled.

Yoxall engaged Carl Louis Croker (see Little Bottler Vol 34 No 4) to manage the Geraldton Star Factory whilst he concentrated on running the Mullewa factory.
Sometime probably during or after 1934, Croker had made for himself an unknown quantity of 7oz clear crown seal bottles and these showed the Star Trade Mark.
Surprisingly these were just 7oz unlike most companies starting out like S. Waltho & Son (Heart Factory) of Midland Junction who only had 26oz bottles and could not obtain 6oz, 7oz or 12oz embossed bottles.
By April, 1937 Carl Croker had accrued debts to a number of creditors and whilst his liabilities on today’s standards was not high he was declared bankrupt.

The fate of the Star Works after 1937 is uncertain as the dominant aerated water factory in Geraldton right through until 1947 was that of Chapman & Jose. 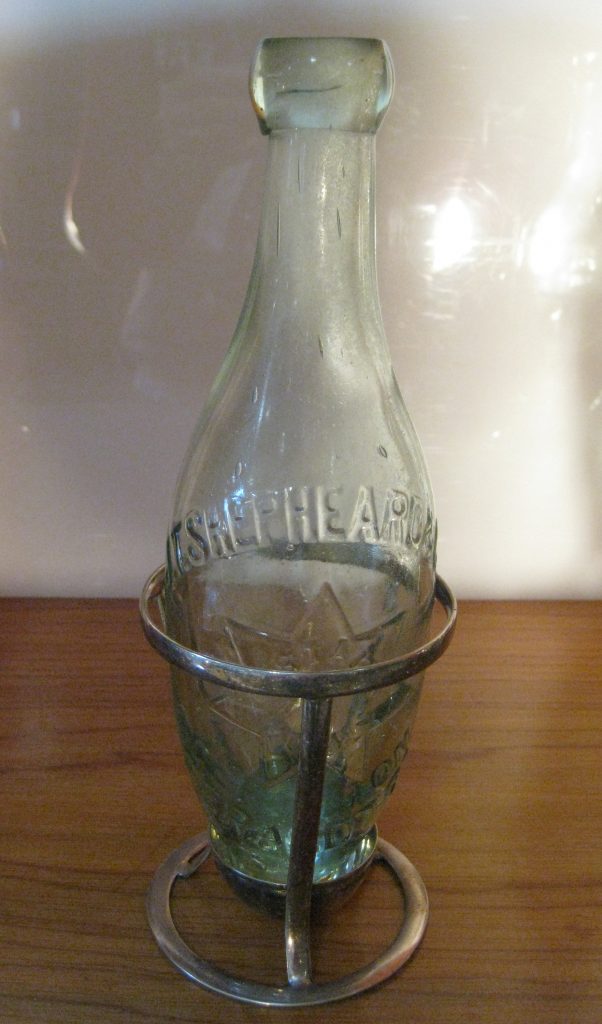 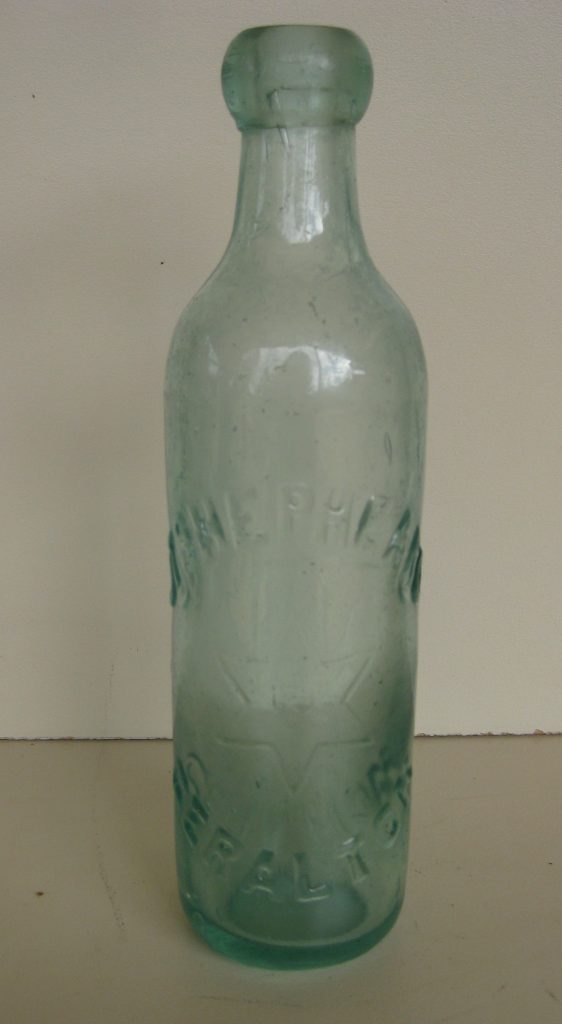 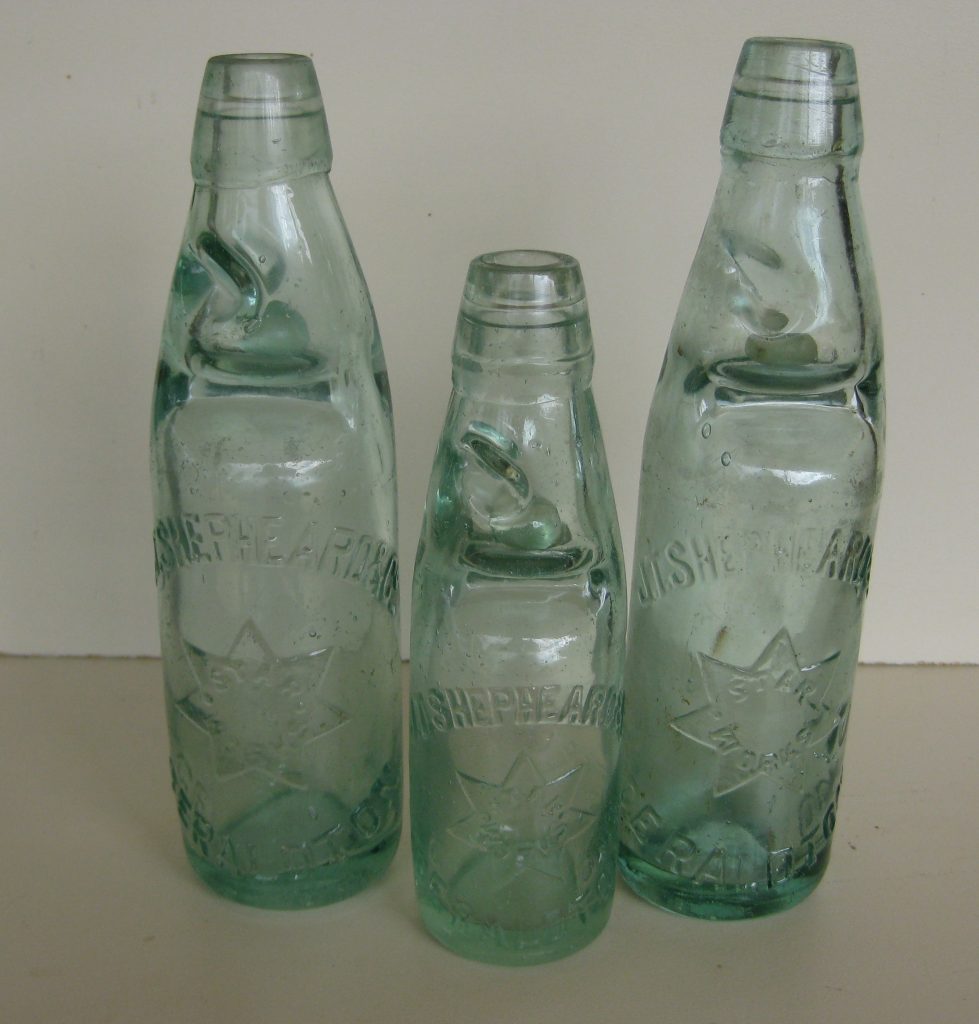 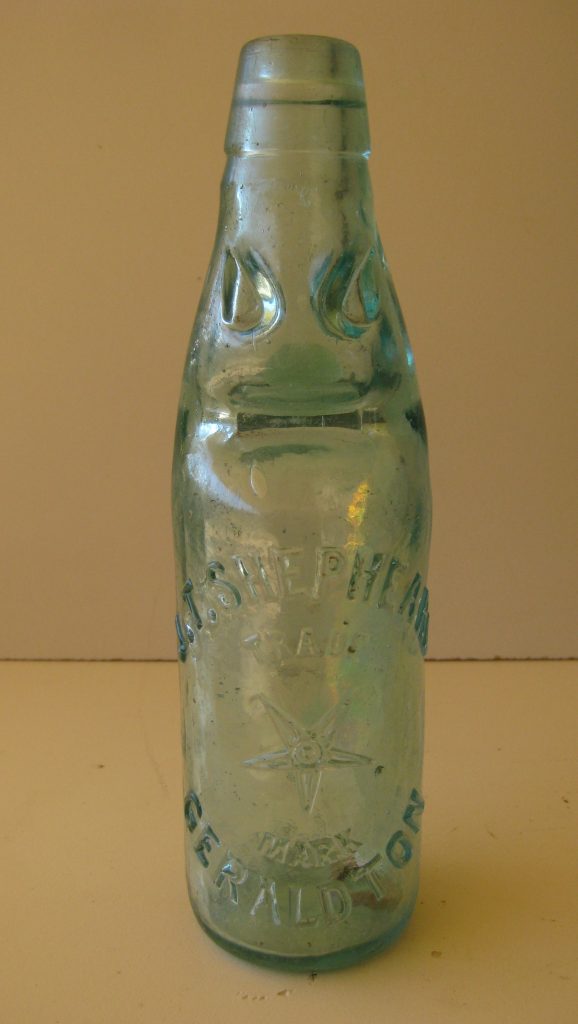 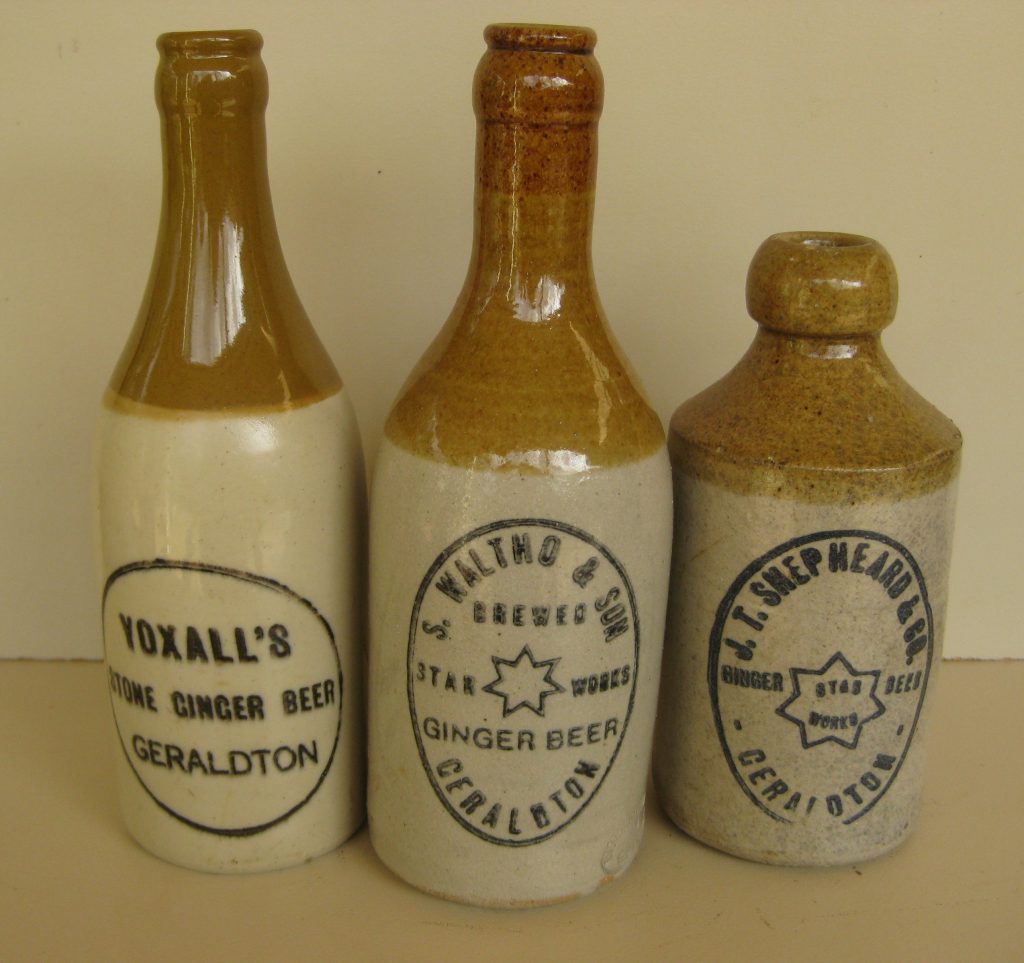 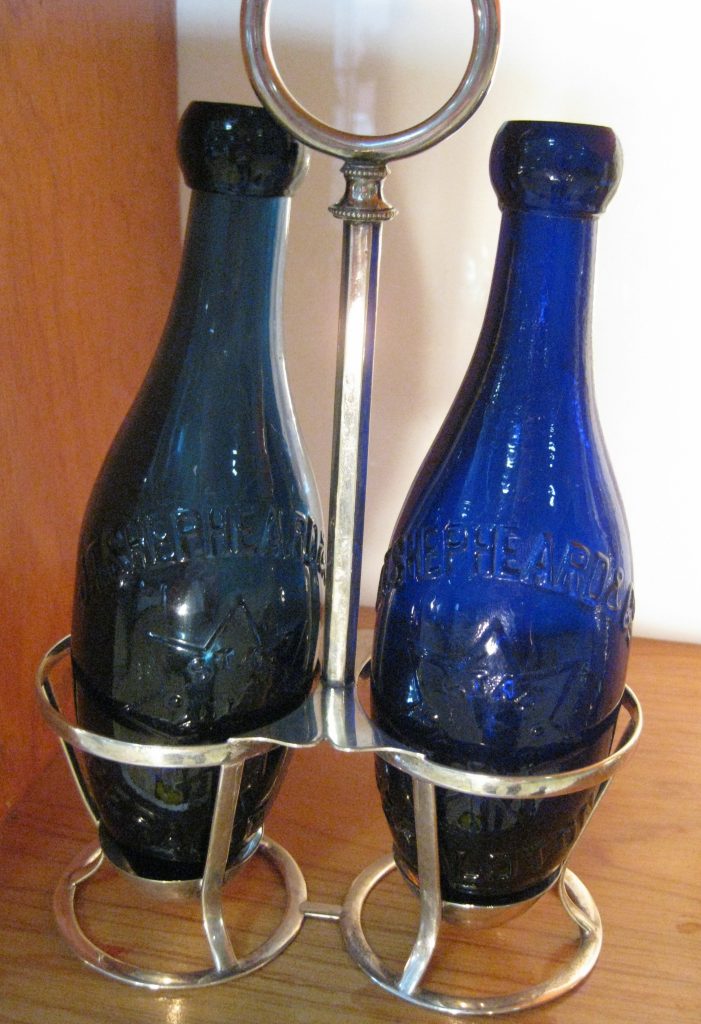