This aerated water company opened at 150-152 Lord Street, Perth in 1909 and was situated on the south east corner of Parry Street.
By 1913 – 1914 the address was 152 Lord Street and Morley & Co was noted as cordial manufacturers with Jonathan (John) Coppin as Manager.

Coppin was born in Brighton, England in 1879, however he never owned the land.
Members of the Stone family owned the entire triangular block of land bounded by Samson Street to the south, Lord Street to the west and Parry Street to the north.
Winifred Kathleen Stone, daughter of John Stone of Mount House, Mount Street, Perth owned the land directly on the south east corner of Parry Street until 8th July, 1913 when that land and the surrounding land was acquired by the Commonwealth of Australia.
There were eight small allotments each of 10 metres frontage subdivided along Lord Street and a large building was established over perhaps three of these allotments.
A number of businesses operated out of this building including the Morley Aerated Water Company.
However all the land in that area was destined to be used for either the Eastern Railway purposes, roads or quite recently used as a buffer zone for the Graham Farmer Freeway.

Neither Coppin nor the Stone family names provide any clue as to why the company was named Morley & Co.
The company engaged Pearson & Co, England to produce a large quantity of one gallon stoneware demijohns showing Morley & Co as Brewers of Non Alcoholic Beverages and they used a Trade Mark of the rising sun.
They are not recorded as using any other form of bottles to dispense their non alcoholic ginger beer during that time.
There were many small businesses recorded along the Lord Street frontage during that time and the land on the north east corner of Parry Street was owned by Robert Charles Plant since before 1901.

Plant was born in Middle Swan, Western Australia in 1867 and became known as a beer bottler and he ran the City Mineral Water Works as R.C. Plant, producing aerated waters.
He leased this property to Edwin Good for 5 years in 1901, however the property sold to Albert Good in 1904 and Albert Good ran the company as the City Bottling Co until he sold the property in 1911.
The City Bottling Co was still active in 1915.
During it’s existence, Morley & Co did not appear to engage in any form of advertising so it is likely their proximity to the City Bottling Co was sufficient to maintain their trade.
The Golden West Aerated Water Co was another company to use the rising sun as a Trade Mark.
They were established in 1899 at 41 Fitzgerald Street, Perth with Thomas Langley as Manager.
By 1906 they had re-established to Carr Street in Leederville and continued to trade right through till the mid 1950’s.
It would appear they acquired the rising sun as a Registered Trade Mark from Morley & Co sometime after 1914, however there appears to be no link between the two companies. 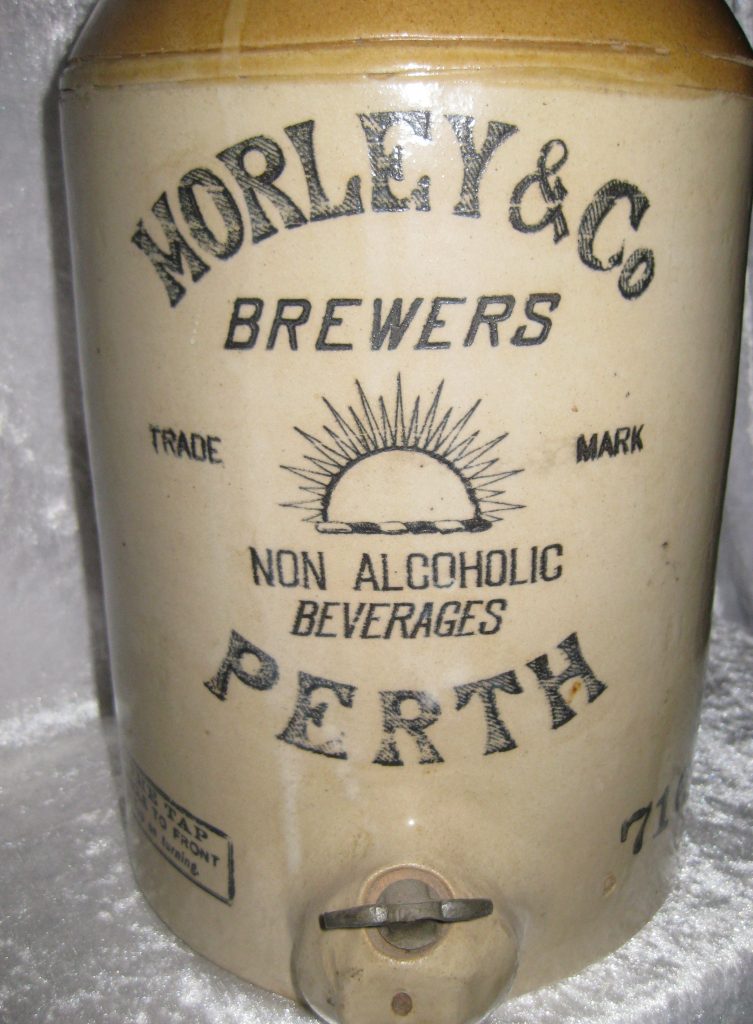