Francis Walsby Holland was born in St. Pancras, London in 1848 to parents Francis Walsby (dec 1851) and Louisa Holland.
There is no record of when he arrived in Western Australia but likely before 1871.
His name is first mentioned in Western Australia in 1873 where he marries Jane Lavery at St. Patrick’s Church in Fremantle.
A court case in the West Australian dated 17th September, 1875 described him as a Police Constable based in Bunbury during the period of August, 1874 so he is 26 years old at this time.
The Eastern Districts Chronicle makes a brief note on both the 23rd and 28th June, 1881 that he and his wife have a son at York.
The Fremantle Herald dated 13th August, 1881 shows an extract from the Government Gazette as Lance Corporal Francis W. Holland appointed Gaoler at York.
The appointment is dated August 9th, 1881.
This appointment appears to be a very brief occupation as at some time soon thereafter Holland appears to move his family to Perth and takes up residence in Mounts Bay Road, Perth.

Here he established the West Australian Mineral Water Works and engaged Kilner Bros of Dewsbury, England to produce Lamont style bottles bearing his name and the West Australian Mineral Water Works.
An interesting notice appeared in the Inquirer and Commercial News dated Wednesday 22 February, 1882 which reads Notice of Application for Wine & Beer License: I, Francis Walsby Holland, married, aerated water manufacturer now residing at Guildford in the District of Swan do hereby give notice that it is my intention to apply at the next Quarterly Licensing meeting to be held in this district for a license for the sale of wine, beer and other fermented liquors, the produce of the colony in the house and appurtenances hereunder belonging, situated at James Street, Guildford at present occupied by me and rented of Samuel Gould. Dated 18th February, 1882.

Another notice of interest appeared in the Enquirer & Commercial News dated 30th May, 1883 and derived from the West Australian Government Gazette states that the tender of Mr F. W. Holland to carry mail to and from the Post Office at Guildford to the Railway Station and vice versa, 3 times daily or oftener if required in a one horse spring vehicle, for two years at £49.00 per Annum has been accepted.
So it is interesting to imagine how Holland might run a lemonade factory in Mounts Bay Road, Perth, a Wine & Beer outlet and mail run both in Guildford all at the same time if at all three.
The ability to get customers to return bottle stocks promptly was a difficult task for all aerated water manufacturers and may have led to the demise of Holland’s Factory.

The Enquirer & Commercial News dated Wednesday 2nd December, 1885 has a notice – “The Mineral Water & Cordial Manufactory which was lately established in Mounts Bay Road by Mr F. W. Holland has changed hands. Messrs Crowder & Letchford are the purchasers at a satisfactory figure”.
It was clear by now that Francis Holland and his family intended to leave the State. Classified Advertising notices in The West Australian throughout November, 1885 gave notice of “Sale of Household Furniture” by Public Auction by Courthope & Co.
They were instructed to sell all the family’s household items at Holland’s residence in Mounts Bay Road by auction on 29th December, 1885.

It is difficult to determine exactly when Fred J. Read of Guildford acquired the rights to the name “West Australian Mineral Water Works” as shown on his marble bottles.
Certainly there was some association between the two men as the Read family, grandfather George, father Mark and Fred all resided at Mounts Bay Road, Perth at some time and so did Francis Holland and his family for a short period.
Also Fred Read and Holland had enterprises at Guildford all around the same time in the early 1880’s.
Crowder & Letchford appear to have had no interest in the company name but certainly in Holland’s bottle stocks.

The Inquirer & Commercial News dated Wednesday 30th June, 1886 has the following advertising:
Important Notice to Residents on Mounts Bay Road.
We hereby give notice that all Cows and Horses trespassing on our property fronting to Mounts Bay Road (formerly known as “Hollands Lemonade Factory”) will be impounded and their owners summoned for all damages. And all Fowls, Pigs, Goats or Dogs found upon the said property after this date shall be shot, irrespective of owners or other considerations.
Crowder & Letchford. Perth June 28th, 1886.

Further advertising is seen in the Inquirer & Commercial News dated Wednesday 3rd November, 1886 that reads:
Caution to the Public.
Whereas all Aerated Water Bottles (Barrett & Elers Patent) now in the Colony bearing our firms name and address and the name of  F. W. HOLLAND “Western Australian Mineral Water Works” are Our Absolute Property, the Public are Hereby Cautioned against purchasing or making any use whatsoever of such bottles, as the same are returnable to us as soon as emptied of our Waters, and as we have not parted with our property in any one of such bottles, we shall take Legal Proceedings against all persons holding illegal possessions thereof.
Crowder & Letchford, Perth & Fremantle.

As F. W. Holland had already left the State, Crowder & Letchford were certainly expressing their rights and desire to prosecute against both trespassers and those withholding their bottle stocks.
The reference to “Western Australian Mineral Water Works” in the above advertising appears to be the only recorded reference to such a company’s existence.
Francis Walsby Holland had moved his family to Sydney.
Late in life and just three years before his death Francis Holland was appointed as Chaplin of his local church.
He passed away in Campbelltown, New South Wales in 1914 aged 66.
It is difficult to pinpoint his occupation once he left Western Australia as his son was also named Francis Walsby Holland.
Lamont bottles bearing the name F. W. Holland are among the very earliest embossed bottles recorded in Perth, Western Australia. 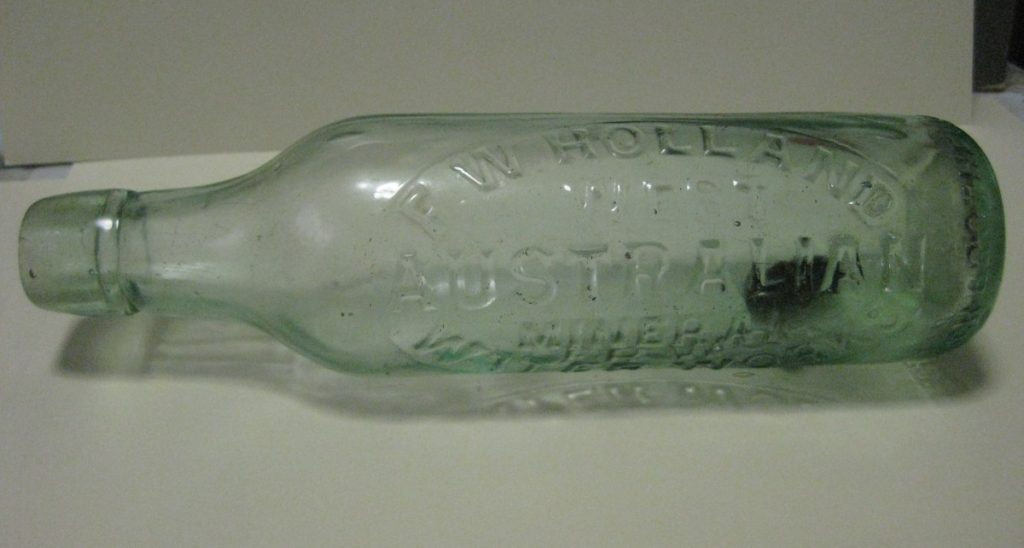