In 1897 we find Charles and Alfred Jecks of Guildford listed as gardeners and apiarists.
By October 1897, Charles Jecks had purchased land on Queens Road, South Guildford and established the Guildford Bee Company.
He is listed in title as an apiarist and by 1902-1903 had purchased the six adjoining land allotments.
In total his property amounted to nearly three acres located on the north side of Queens Road close to West Parade, South Guildford.

His honey jar in the common shape of a pickle jar is heavily embossed within a slab depicting two bee hives and buzzing bees.
It bears the mark “Trade Mark Reg” though no record exist in the West Australian Government Gazette.
This classic bottle often found its way into eastern states collections, sold incorrectly and displayed incorrectly as a pickle bottle.

The rivalry between trades must have been an ongoing issue and the need for a sound registered trade mark is evident when on Thursday 24thNovember 1910 the West Australian newspaper reported an article from the Supreme Court of Western Australia.
The case was between F.H. Faulding & Co and Charles Jecks where Fauldings applied to have Jeck’s Bee Hive design expunged from the register.
No doubt this was a David versus Goliath battle as Fauldings was an extensive company throughout Australia.

Jecks instigated proceedings against Fauldings claiming infringement of Trade Mark.
Fauldings were selling honey with facsimile paper labels depicting the two bee hives and buzzing bees which Jecks objected to.
Fauldings fought the case on the grounds that Jeck’s Trade Mark did not contain the essentials of Section 21 of the 1884 Trade Marks Act.
They also produced evidence that the trade mark was in fact in common use in 1903 and not specific to Jecks alone.
The trade mark was declared as “publici juris” used by all persons dealing with honey and was duly expunged from the register.
Fauldings had successfully established the design had been in use from 1899 to 1903 by other parties before Charles Jecks claimed to register the Trade Mark.
This issue did not appear the be a setback for Jecks as the business appeared to remain quite buoyant.

It may be coincidental that close to that time Donald Curtis established and registered the Perth Glass Works Horseshoe Trade Mark.
This can be found in the West Australian Government Gazette 28 April, 1910.
There is no evidence to suggest that Jecks did or did not use the PGW pickle shape bottle in the production of his honey once his trade mark was expunged, however it is highly likely because of the similarity.
PGW pickle jars are found extensively around the State and would have been supplied to anyone requiring such a glass commodity. 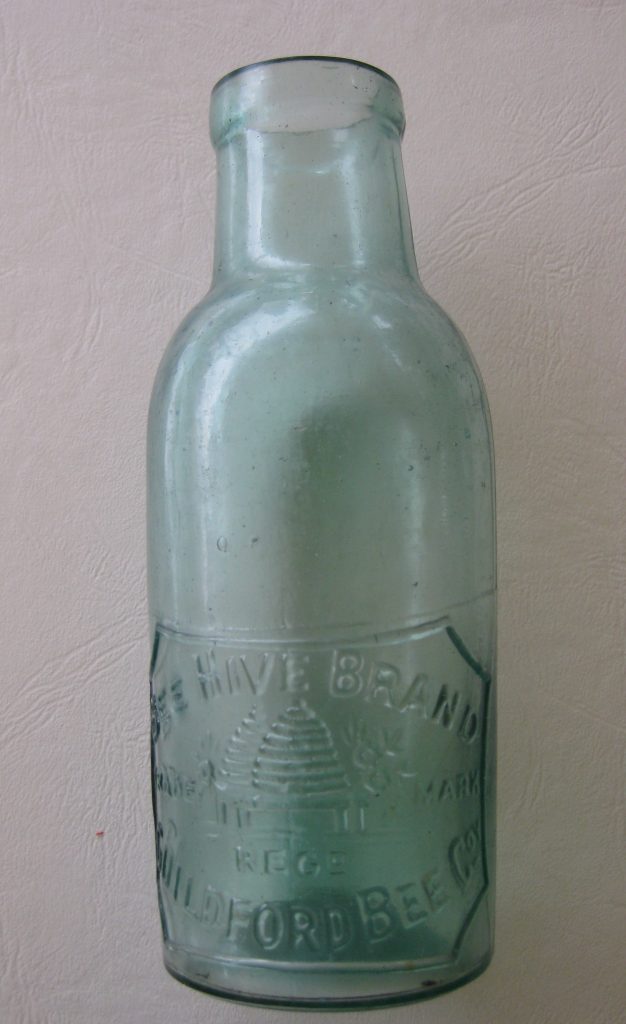