William George Watkins, aka George William and William Watkins was born in 1873 in Victoria. He came to WA in the gold rush era, about 1895 and was connected to I J K Cohn of Coolgardie.

His first cordial factory was at Bulong. This town was gazetted in November 1895 and was formerly named the I O U after the mining lease in the area. I O U had been granted its lease two years earlier.

By 1898 he had moved to the developing area of Boulder. Since it was gazetted in 1896, the town was growing rapidly and Watkins established the Shamrock Cordial Factory at 19 Richardson Street. He had bought the business from Ellen Bennett and she transferred the Shamrock trade mark to Watkins on 27 July 1900. However, the Registrar’s office did not recognise this fact and a solicitor from Kalgoorlie wrote letters on his behalf to have his name formally recognised as the owner of this trade mark from this date. The name was finally given to him in November 1901 although matters were still argued until 1910. Ellen Bennett registered her Shamrock brand on 13 October 1899 for aerated waters, & ginger beer.

There was much rivalry between the aerated water companies, all established at similar times in the Kalgoorlie and Boulder area. All were vying for the patronage of the miners and their families in the early days on the fields and this caused Watkins to place an ad in the local newspapers warning other companies to stop damaging his reputation or he would sue.

At Kalgoorlie there was another company run by George Flakelar who also called his factory the Shamrock. This factory had a frontage to Hannan Street. He continued until March 1908 when he put the factory up for auction. He had a substantial wood and iron building on the site.

Watkins went to Victoria around 1902/03 where he married New Zealander, Laretta Crook. They had two children born in Boulder, William Albert Arthur born in 1904 and Laretta Florence May Watkins born in 1906.

His foreman in 1905 was James Edward Wood. Wood had arrived in the goldfields in 1896 and had been employed by Jacob Asher at Bulong. He followed Asher to Kalgoorlie and then joined Watkins at the Shamrock Factory.

The business was doing well and Watkins expanded his interests into mining leases and by 1914 placed an ad that a hotel was available to lease in Boulder for 4 years and he had a new line of Lemon Squash Cordial. He invited the public to forward a design for a label for his bottles and he would award a prize of 2 guineas for the best design.

Also, in the year 1914, Joseph Moore on the corner of James and Roe Streets in Perth had a factory called the Shamrock Cordial Factory, so again a conflict of interest, although many kilometres apart. I expect because of the distance, the factories sales, did not encroach on each others businesses.

By 1915 Albert William Rodda who had been in the hotel trade from 1900 till 1914 became Watkins manager. Rodda was born in Tanunda, SA in 1858 and had arrived in Kalgoorlie in 1898. Rodda still had the Waterfall Hotel at Golden Ridge and in 1918 advertised the premises for lease or let for 3 years.

In 1916 cordials were still delivered by horse and lorry to the hotels in the area. His driver Richard Holt broke his leg when the lorry became stuck in soft sand on the way to Lakeside. After freeing the lorry and getting the horse moving again, he attempted to jump aboard the moving lorry and slipped and fell.

Watkins advertised the Portland Hotel in Boulder for lease in 1918 and in 1920 supplied cool drinks to the Boulder children at their annual New Years day sports carnival.

He diverted his interests to the sandalwood industry. In 1924 he wanted a man to fell timber and a boy to strip leaves at the Kookaburra Eucalyptus Company in Yellowdine, near Southern Cross. Two years later he wanted a labourer for the Co ee Eucalyptus Works at Yellowdine. Was this the same company?

Around 1926 he moved to Cottesloe, although he still operated the Shamrock factory in Boulder with the help of his manager James Wood. His daughter had married in New Zealand and son William eventually entered the photographic business in the 1940’s at Maylands.

He also entered into a partnership with Marjorie Lydia Chambers at Waroona where they ran the Murray Vale Stud farm. This was dissolved upon his death in 1932.

William Watkins died in Cottesloe aged 58years in January 1932 and his wife Laretta died at Scarborough aged 80 years in 1958. Both are buried in Karrakatta Cemetery.

The Shamrock Cordial factory was put up for auction in February 1932 as a going concern. It comprised freehold land, iron factory, stables, goodwill, plant, machinery, office furniture, stock of aerated waters and cordials, bottles and bottle boxes to be taken at valuation. Also, there was a freehold brick home of 5 rooms at 19 Richardson Street, Boulder.

The following month the Goldfields Cordial Company Limited with a capital of 1,000 Pound in 100 Pound shares, applied to take over the business and make all kinds of aerated waters.

James Edward Wood the foreman in 1905 in Watkins factory was now the manager as Rodda had died in 1926. Wood continued as the Goldfields Cordial Company manager until he retired aged 76years in 1946 and moved to Perth.

The Goldfields Cordial Company continued for many years to come.

Watkins bottles are numerous as the company operated for about 34 years. His marble bottles featuring the trademark, 3 leafed shamrock, have the stem on bottles facing the left or right direction. Some are made in Melbourne and some do not have a manufacturers name.  Some are also made by C S & Co Ltd. He also made applied top crown seal cool drink bottles and most collectors would have a Watkins bottle in their collections. His ceramic ginger beers consisted of white crown seals with the shamrock coloured in black or with just the outline of the leaf veins. He also had a tan topped crown seal. His champagne shaped ceramic ginger beers are in white with a blob top and there is a dark green blob top and a light green blob top with a lightning stopper. 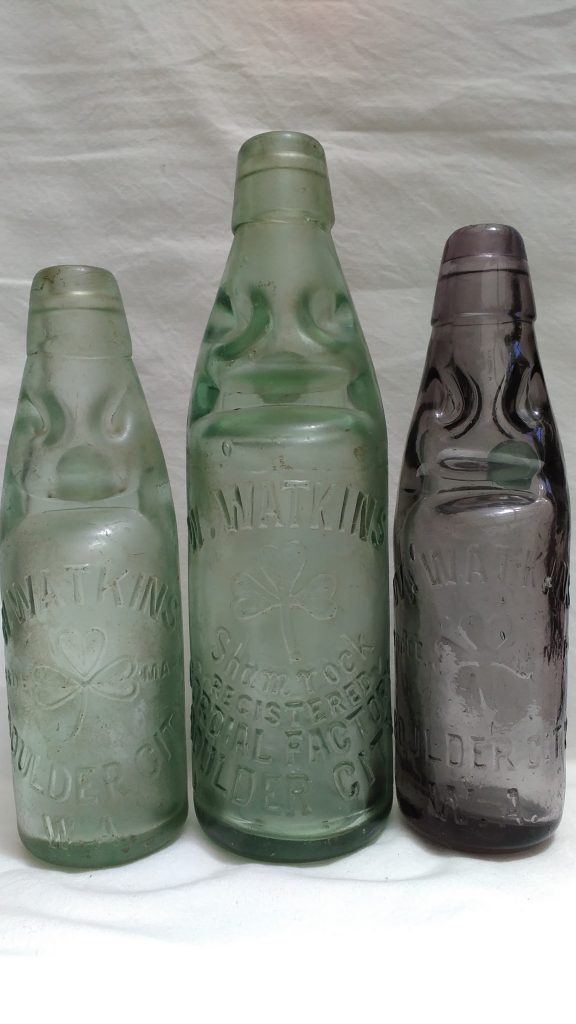 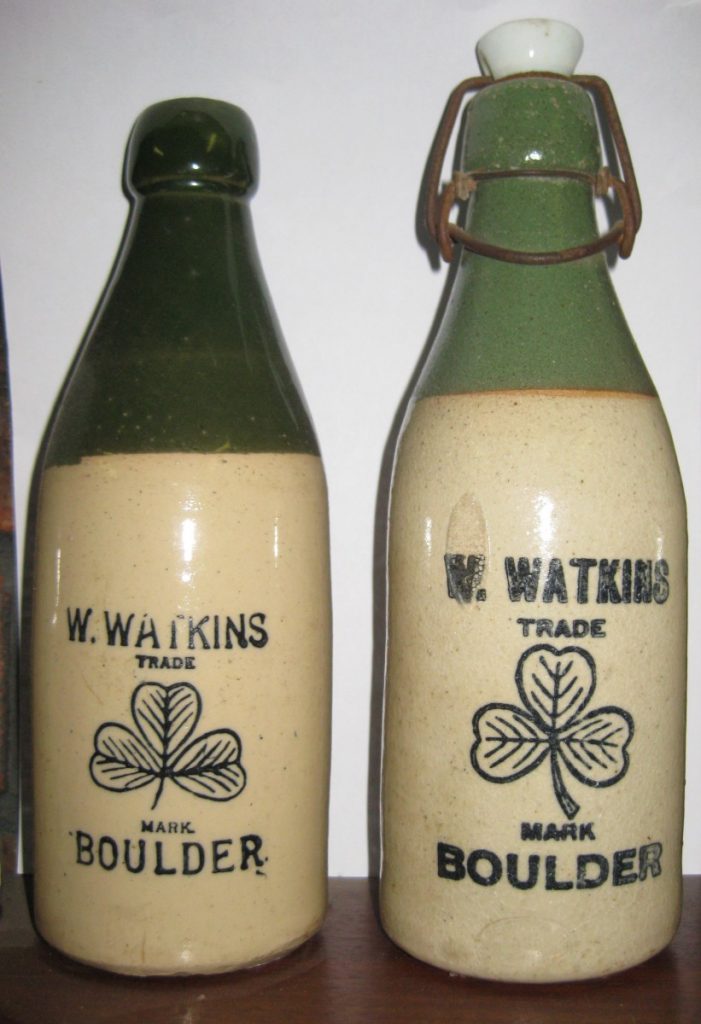 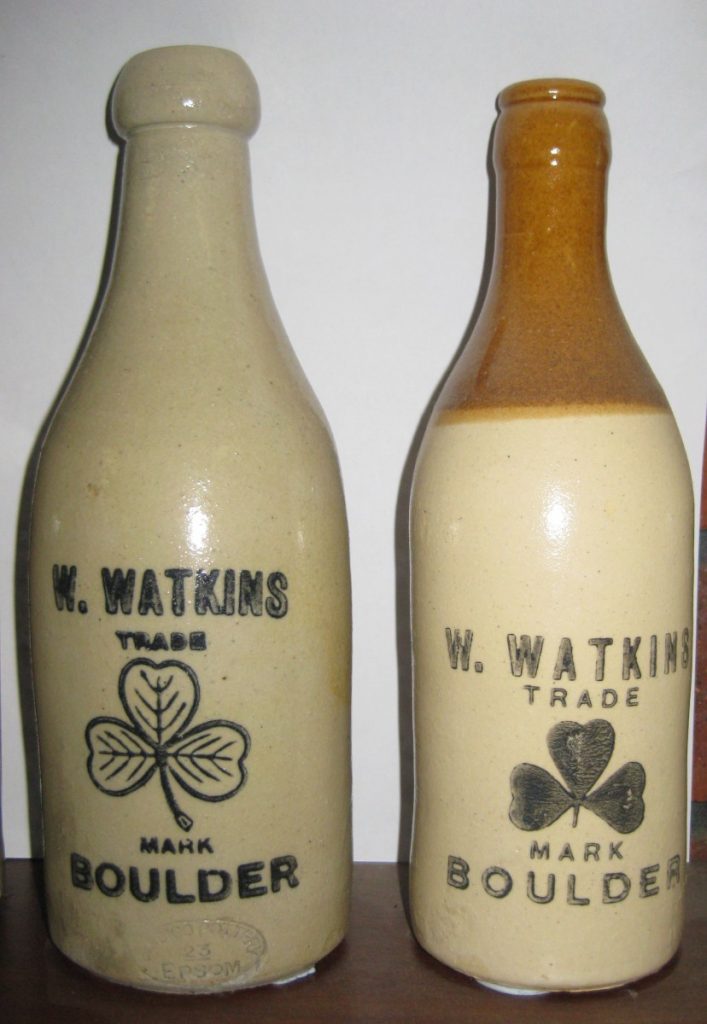 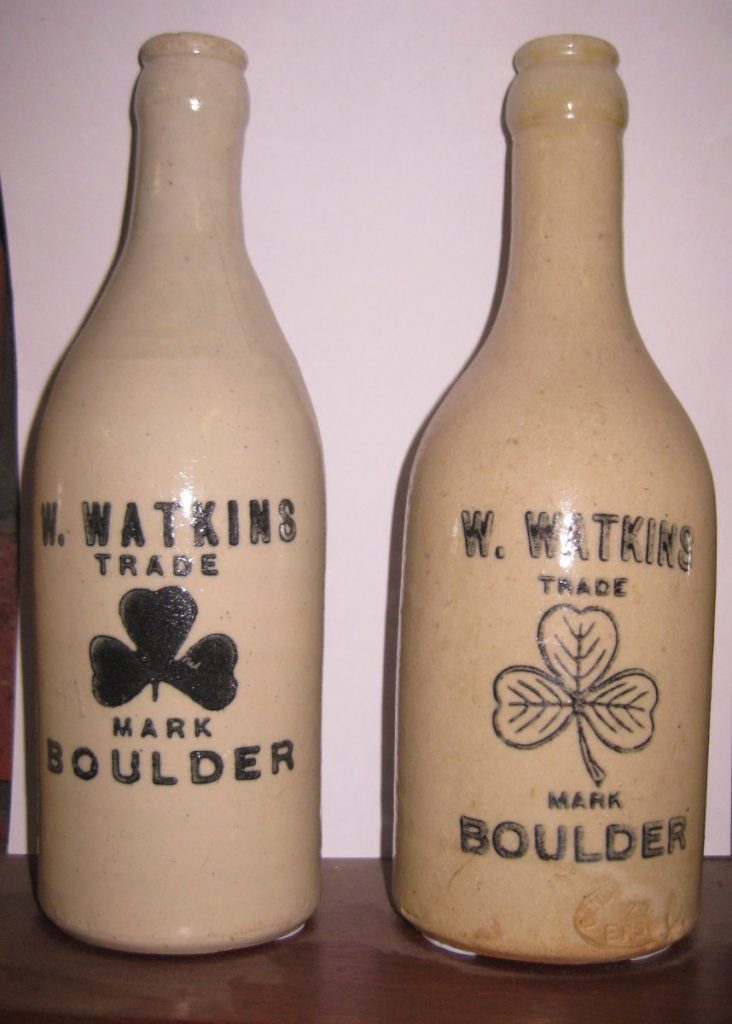 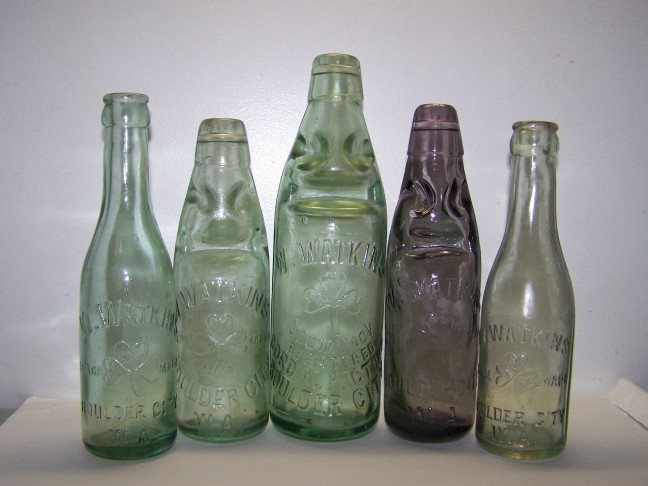