WALTER THOMAS HERDSMAN was born in London in 1864.  In 1871, his father William was a wardrobe dealer, living with wife Lucy in Portobello Road, Kensington with their five children. The family of William, Lucy, and children Alfred, Charlotte, Walter, Arthur and Henrietta arrived from London aboard the 637 tons barque “Helena Mena” in October 1880.

In the early 1890’s, Walter married Frances Brennan and a daughter Elizabeth was born in Perth in 1892.  He had secured a position at the Swan Brewery as a bottler. He lived in Leederville and wanted a gallon licence for a business here, as the area was becoming settled. The roads were atrocious so he felt to have a building here, so the local residents would not have to use the rough road to visit the city, would be of benefit. However, he had opposition from residents and his application failed. His position at the Malt House of the Swan Brewery in Mounts Bay Road required him to advertise often, for bottle washers and wirers. As his repeated requests for a license for Leederville were refused, he turned his sights to the booming goldfields town of Kalgoorlie.

He settled on Town Lot 439 in Hannan street, Kalgoorlie in November 1896. This block had a 30’ x 20’ wood and iron shed suitable for ale, stout etc. The business was named THE SWAN BOTTLING WORKS and he bottled beer and stout on behalf of the Swan Brewery. He was the owner and his licence permitted him to bottle wine, beer and other fermented liquors. However, other bottling companies in the town also purported to be able to sell Swan Brewery beer and ale etc so he placed ads in the local papers stating Swan Brewery Ltd drinks could only be obtained in bottles from his firm. W H Dancker of the Kalgoorlie Bottling Company was one company in opposition and he stated he had a regular supply of Ale and Stout direct from Perth from the Swan Brewery, so this must have affected Herdsman’s trade.

EZRA CALEB DANCE had been his partner in the Swan Bottling Company and the partnership was dissolved on 20 November 1897. Herdsman would carry on using the same company name. In 1898 he offered a position as bottle washer at 3 pound per week to the successful applicant. In December 1899 a large gala day featuring exhibits from trades people in town and a street procession was held. By this time Herdsman was now producing aerated waters at his Hannan Street factory and his horse drawn display won first prize for his cordial company.

Herdsman registered his BICYCLE TRADE MARK for Liquors/Spirits, trading as SWAN BOTTLING WORKS, on 16 February 1899. This trade mark would also be a feature for his aerated waters. In 1900 his Pale Ale featuring the Bicycle Brand was one of his best products. His ads also mentioned he was “late of the Swan Brewery Perth”. In June 1901 he decided on a change of occupation and became licensee of the QUEENSLAND HOTEL in Forrest Street, Kalgoorlie. He transferred the license of the Swan Bottling Works to his brother ARTHUR JAMES HERDSMAN on 16 August 1901 for the factory at 439 Hannan Street. The Bicycle brand ads now also featured the wording, aerated waters and cordials. The Queensland Hotel had a billiard room, dining room, 8 bedrooms, 2 sitting rooms and was rented from J C Smith. In December 1901, he decided to build a brewery at the west end of Hannan street on the same block as his Swan Bottling Works. Now he could bottle his own products and not “other people’s beer”. His partner in this venture was ERNEST GERALD BUSHELL. Bushell was a chemist and had worked for WA Brewery for four years and had been head brewer at Castlemaine Brewery in NSW and Queensland Brewery in Brisbane. They advertised for beer bottles of any quantity so bottles may have been in short supply. The building would be known as WEST END BREWERY and was a three storied structure and the plant could be extended to produce 200 hogs heads weekly, if needed. They used the best Kent hops, pure cane sugar and Russian Isinglass. In May 1902, their partnership was dissolved.  BUSHELL decided to transfer to the Boulder Bottling Works in Pearse street, Boulder and eventually settled at the Hotel Melville (later the Majestic Hotel) in Applecross in 1905. D W HARWOOD now took over the WEST END BREWERY in Aug 1902.

In July 1902, the UNION BREWERY of Paton & Scott purchased the plant and machinery of the West End Brewery and Swan Bottling Works.

Herdsman carried on as licensee of the Queensland Hotel until May 1904 when he transferred the license to ATILIO VALMADRE. Valmadre had held a license at Coolgardie for 10 months and Broad Arrow for 11 months. In November, Walter Herdsman applied for a gallon license for Lot 445R Hannan Street, rented from his wife. GEORGE FLAKELAR a local aerated water manufacturer joined forces with Herdsman at this time and they dissolved their partnership on 8 September 1906. The Factory was on the corner of Hannan and Nethercott streets, Kalgoorlie and a carboy exploded during a fire at the factory on 28 September. Herdsman had left for Perth the day before and his wife did not see anything amiss when she checked the premises the evening of the fire.  It was completely destroyed. Herdsman returned the next day and luckily the premises was insured.

He now moved to the Junction Hotel aka Half Way House, and 7 mile on Bulong Road Kalgoorlie in August 1907. In April 1908 he advertised three parcels of land and homes in Kalgoorlie (Lot R445, Lot R436, Lot R437) for sale. In November 1908 he transferred the license of the Junction Hotel to JAMES KINGSLEY. He then applied for a gallon license for Kalgoorlie Town Lot 1053 and 1054 on the corner of Boulder Rd and Roberts street. In 1910 he is living with his wife Frances at 551 Hannan Street and gives his occupation as bottler and is still at this address in 1913.  In 1911 he became an agent for Hannans Brewery delivering orders to the Kurrawang Woodline and continued to do so until June 1914.

In 1915 Herdsman was 51 years old and he and brother, ARTHUR JAMES HERDSMAN,  enlisted in WW1 as did Walter’s son Walter Edward Herdsman. Walter Thomas Herdsman gave his age as 44 years 6 months when he was really 7 years older! Arthur lost his life and Walter Thomas Herdsman returned medically unfit in July 1917 and son Walter Edward Herdsman returned in August 1919.

W T Herdsman returned to Kalgoorlie and was a wood merchant in 1920. In the early 1920’s he and Frances moved back to the city to be closer to family and lived at 1 Park Grove, West Perth where he gave his occupation as bottler. They remained here until 1930 and then moved to Toodyay.

Wife Frances Cecelia Herdsman died at Toodyay in February 1931. Walter lived in Heaney St, Toodyay in 1936 and moved back to Perth where he lived in Victoria Park. He died on 2 February 1940 aged 75 years and is buried at Karrakatta Cemetery. 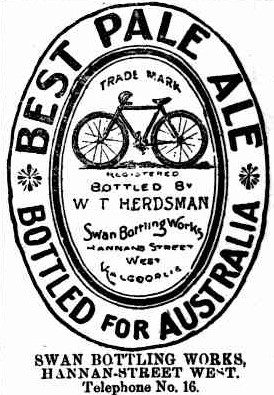