John Thomas Tandy known as Thomas Tandy was born in 1889 in Smethwick, Staffordshire, England near Bermingham. He was one of nine children to Thomas Richard Tandy and his wife Lucy. In the 1911 English Census, his father was a rolled plate glass maker whilst son Tom was at Oldbury Staffordshire as assistant manager in a bakery and was 21 years old.

Thomas Tandy arrived in WA in August 1911 and joined his uncle Joseph Duffell who had moved here in 1905 and was in business in Perth.

Tom found work as the manager of the Melrose tearooms upstairs from the Melrose theatre in Murray Street in 1912 and between that year and 1915 he joined his Uncles company of Joseph Duffell & Sons also in Murray Street, Perth. They were importers of Cordial & Brewers items including Soda Fountains and also Bakers sundries. The company eventually moved to West Perth in the 1920’s and specialised in cork manufacture.

However, WW1 intervened so he enlisted in the 16th Battalion in 1915. Two of his brothers in England had also joined the armed forces and before his return home in 1919, Tom had achieved the rank of Regimental Sargeant major.

He married Isabella Welch in 1920 & listed his occupation as of Clarion Aerated Waters. I have not found any mention of this company in the newspapers. Was this name changed sometime in 1920 to RSD Aerated Waters?

Tom was now the owner of the (Returned Servicemans Distillery), I believe this was the meaning of the initials used for the company name, as Tom had served in the AIF. The business was on the corner of Wellington Street and Marquis Streets in West Perth. By 1922 their specialty drinks included Ineeda Tonic, Hop Beer, Dry Ginger Ale and Cordials.

In 1926 a burglary occurred at the factory and soon after Tandy moved to Newcastle Street and the new premises became known as the RSD & Perth Vinegar Brewery manufacturers of Swan Brand Products.

By 1928 the company were exhibiting their Swan brand products at many annual country shows and in 1929 their pickles, sauces, malt vinegar and cordials won many awards at the Royal Show in Perth.

Their square sided bottle held onions and chutney and they had established a large tomato pulp factory in Geraldton where growers in the north supplied most of the sauce supplies for the Swan Brand Products.

1930 records in the newspapers state, the company had been very busy in the past 3 and a half years. They had used one ton of onions, 150 tons of tomatoes, 25 tons each of cauliflower, celery, green tomatoes, beans and cucumbers annually to make pickles and sauces. Also 160 tons of tomato pulp was exported to the eastern states. For jam they had used 55 tons of peaches, apricots and plums, and figs packed in 1 ½ pound tins with their attractive label.

This year was also a sad one for Tom as his brother Harry Tandy had joined him as assistant manager and was electrocuted in the factory by wiring incorrectly installed before Tom bought the factory.

The factory at 567 Newcastle Street covered nearly a block and they sent a shipment of products to Hong Kong, Colombo, Singapore and Batavia.

Their Royal Show successes were many and in 1934 he received the Darrell Hicks Trophy for the companies Swan Products display at the annual show.

Gherkins were also bottled and lemons were used as lemon squash and candied peal. In 1934 he also introduced two new lines, Worcestershire Sauce and a heavy fruity sauce to be known as JTX. Aerated waters were still mentioned at this time.

He was still Managing Director in 1948 when he took a holiday to England on the Moreton Bay.

John Thomas Tandy passed away at Claremont in 1957.

Bottle collectors have many bottles from the RSD and Swan Brand Products factory including the amber and clear glass chutneys and pickles plus clear and brown tomato sauce bottles and jams jars and the early RSD crown seal bottle. 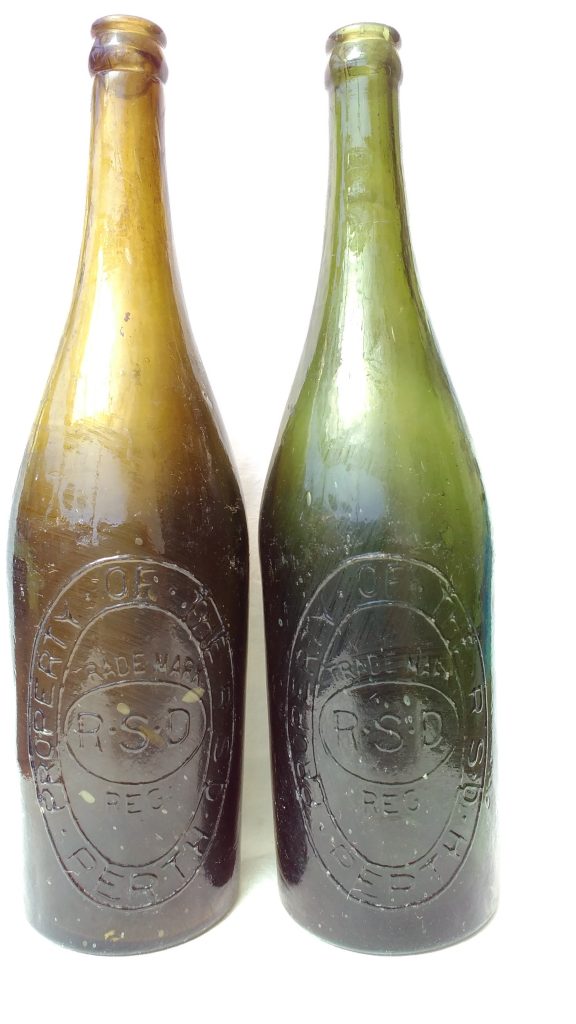 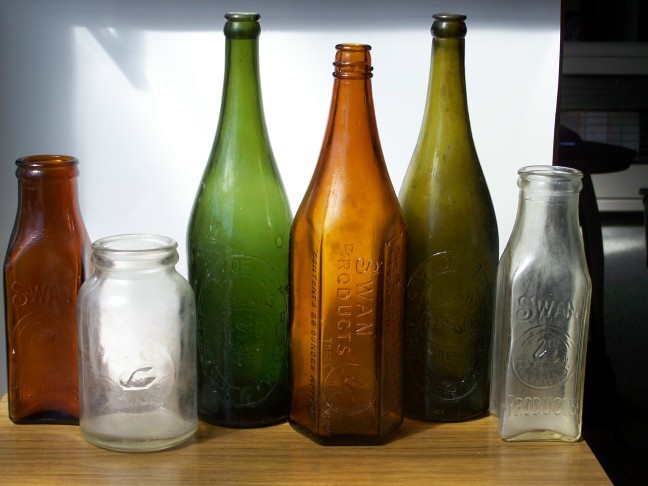 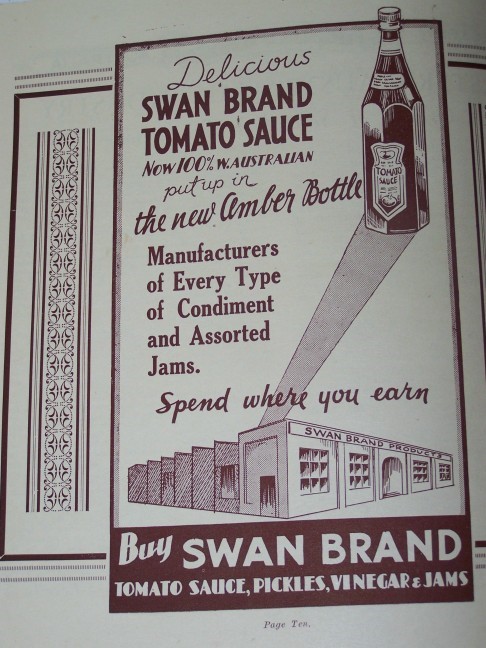