Samuel Yoxall was born c1876 in Beechworth Victoria. His family had aerated water interests in NE Victoria and he went into partnership with his brother John Proudlove Yoxall about 1905 when they took over the Moonee Valley Cordial Company in North Fitzroy.

During his time in Victoria, Samuel was awarded his 1st gold medal, 12 first prizes and 6 special prizes for products exhibited at various places in the state.

The partnership was dissolved around 1908 when Samuel moved to country Victoria where he produced aerated waters till late 1910.

Early in 1911 Yoxall had heard about the Bullfinch gold area in Western Australia so he moved to WA. The mining lease here from 1909-1910 by Doolette and Shallcross was called Bullfinch, after the finches in the area. The town was gazetted in October 1910 and Yoxall was excited to be in a new town and encouraged his friends to come west. In February 1911 his friends Alex Stewart of Wangaratta and Alex Caulder of Rutherglen received a letter from Yoxall to join him at Bullfinch in WA and help him run an aerated water factory and start a tobacconist and hairdresser’s shop.

Stewart and Caulder did not have success in the town so Stewart returned to Victoria after 12 months to continue his tobacconist and barber shop in Wangaratta where he died there in 1918.

About 1915 Yoxall made his way to the large town of Southern Cross. His aerated water factory was opposite the railway station and was fitted with the most up to date equipment. By October of that year he supplied Bullfinch, Corinthian Club, Westonia, Merredin and Mount Jackson with his wares.

The large factory consisted of a Hayward Tyler aerated water machine filling 100 dozen bottles per hour, a smaller machine filling 30 dozen bottles an hour of stout, bottling machine and beer aerating and bottling plants. There was also a ginger grinder, corking and syphon filling machines. The factory only used rainwater filtered by a Geoffrey filtering apparatus. It filtered 500 gallons of water a day.  The gas was manufactured on the premises by a generator and gasometer. Thousands of bottles were stored in the open yard, loose or in crates. His labels were made by Niven & Co and he also had a number or jars and casks containing brewed beers and cordials.

His nephew Arthur George Gillman helped as cordial maker early in 1915 before Gillman enlisted in WW1. Yoxall also decided to join the war effort but he was declined on medical grounds.

In July 1916 he became manager of the Club Hotel in the town and the following year married Florence Gertrude Douglas the daughter of a Guildford Grammar teacher.

All went well for the next 5 years, but I expect due to many men serving in the armed forces the revenue from his concerns declined and he was forced to place the businesses for sale or lease in November 1921. In February 1922 the aerated water plant, machines, Pinnacle turnover rack & filter, Beer corking machine & 20 gallon cylinder, small gasometer & vat, rinser and flywheels & shafting were advertised for sale for 80 pound. He gave his average revenue as 50 pound per week.

In 1922, Yoxall had 2 young daughters so he moved to Perth and became manager of the Horonda Aerated Water and Brewing Co at 498 Hay Street in Subiaco. Once again, his tenure here was short as the business was listed for sale in October 1927 including all plant, bottles, crates, a one ton truck, horse, lorries etc together with patent rights of brewing Horonda brewed herb beer & Yoxalls English Ale.

The Murchison beckoned & he took over the Pindar Hotel (30’s east of Mullewa) on 27 October 1927 with the license transferred from Charles Herbert Simpson. He stayed 12 months before Marian Agnes Kelly became mine host.

He moved to Mullewa & set up a large aerated water factory here. His drinks were sold throughout the Murchison & down as far as Wongan Hills. In Mullewa he became secretary of the racing club & was a well known figure in the town. In 1932 he acquired the Star factory at Geraldton, formerly the property of Harry Waltho. He placed Carl Louis Croker as manager and Yoxall retained his premises at Mullewa. The Mullewa factory continued to grow and in June 1934 William Henry Priest who was Yoxalls partner retired and Tom Sayers Gowing joined the firm as a partner. In the meantime, Samuel Yoxall withdrew from the Star factory at Geraldton in 1934 and Croker subsequently went into receivership by 1937. Gowing also retired from the Mullewa factory on 1 January 1937.

Yoxall continued to provide cooldrinks to the area and after his first marriage collapsed he married South Australian, Dorothea Bradbury in Perth in 1943.

In 1944 he avoided prosecution by AGM for using their bottles illegally and placed an ad in the papers to say he would return all said bottles at his own expense and not use them again.

By now he was 68 years old and his marriage collapsed again in 1948 and he moved back to the city. He lived at 340 Newcastle St, Perth and gave his occupation as brewer, in 1949. He had been in the aerated waters and hotel trade all his adult life.

His drinks were many but all had paper labels except for the rare brown top, crown seal ginger beer of which only a few are known either whole or repaired. As Yoxall only had the Geraldton factory under his name for 2 years before Croker took over the lease, I expect that is why this bottle is rare. 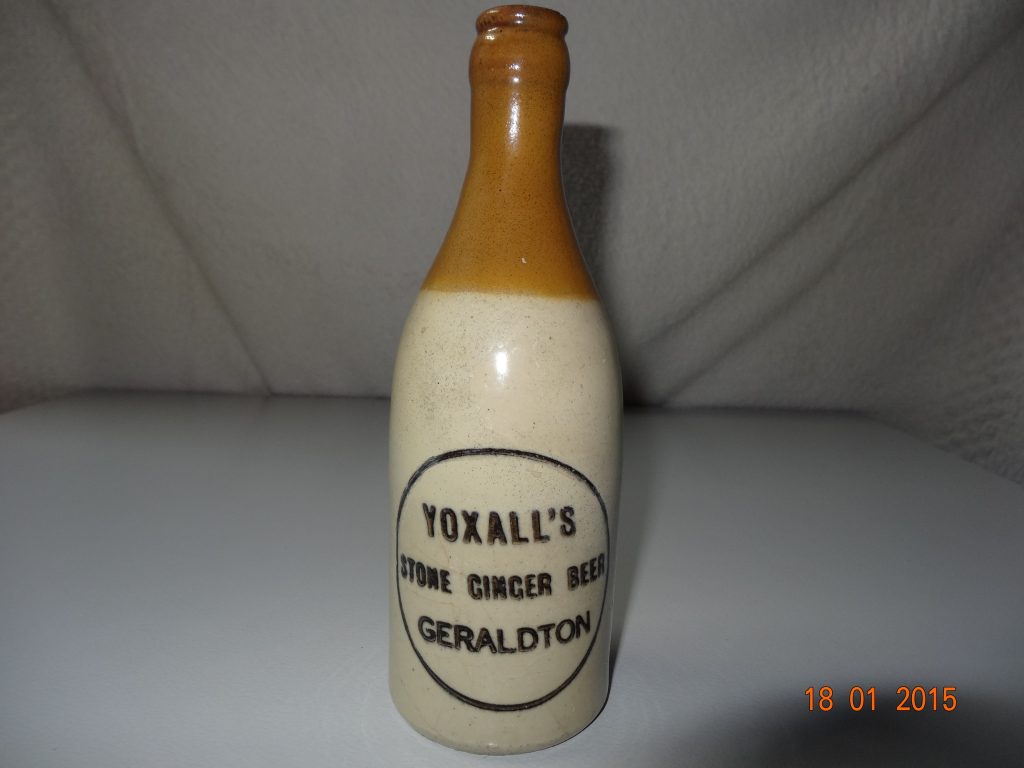 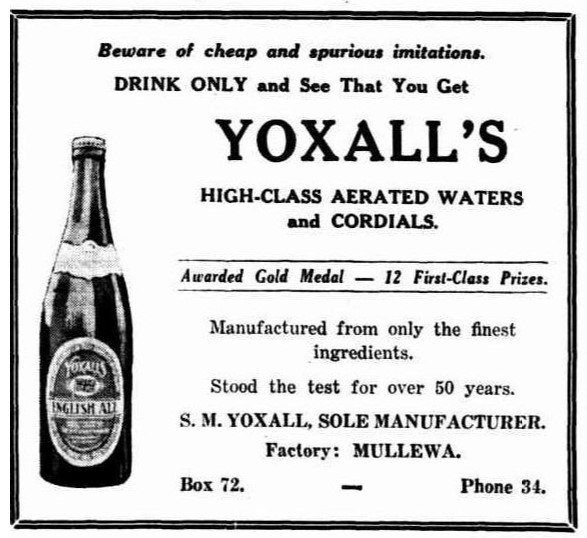