GEORGE ROBINSON & THOMAS HIGGINS were both living in Coolgardie in 1897.

In May 1897 Robinson was living in premises in Forrest Street and applied for a beer bottling license and this was refused. His rented premises belonged to William Stobbart, at Town Lot 416 and in August he applied for a gallon license for this building on the corner of Forrest and Lefroy Streets, and also a wine and beer license which was granted on the same date.

Robinson and his partner Thomas Higgins called their business The Grand Bottling Works. Their order for bottles for the new business may not have arrived or bottles were in short supply, as in October 1897 they placed an ad in the Goldfields Morning Chronicle for 50,000 bottles wanted.

In December they were bottling specially brewed Bitter Ale, a product of the Lion Brewery owned by James Elliott. Also available were cordials and wines.

Mr F J Ince was appointed manager & traveller for the Grand Bottling Depot in Lefroy Street on 21 January 1898 but his employment was terminated in November 1899. Special drinks called The Grand Sparkling Ale and The Grand Double Stout were bottled and they were agents for wines, vinegars, cordials etc.

On 17 May 1898 they moved to larger premises on Town Lot 1081, King St, Coolgardie and asked for the gallon license to be transferred to their new premises. This building was of wood and iron and measured 42’ x 14’. At this time, Higgins journeyed to the eastern states to inspect and buy new machinery for the building. The beer would now be aerated by volcanic gas. The machinery was capable of filling and corking 300 dozen bottles daily. They also installed a complete vinegar plant.

The Lion Brewery still supplied stout for them to bottle and it was reported the partners had “many years experience in the aerated water trade in the eastern states”.

THOMAS HIGGINS – He was born in Queensland to John Edward Higgins and Margery nee Fraser in 1868. His father was a publican in Toowoomba in 1874 and had the Ipswich Hotel in 1877 but by 1881 he was a taxi driver. Son Thomas most probably found his love of brewing from his father.

When Thomas went east to secure new equipment for his factory he also went to Brisbane, Queensland where he married Charlotte Amelia Simmonds on 14 March 1898. She settled into life at Coolgardie and gave birth to a son in December 1898. However, disaster struck the young family when the home owned by Robinson & Higgins & occupied by Higgins in King Street was destroyed by fire. There was no insurance and luckily Mrs Higgins and the baby escaped with no injury. The fire was started by a candle left unattended in a bedroom.

By Xmas 1899 The Grand Bottling Works employed 20 hands making ales, stout and aerated waters. They had 4 horse drawn wagons making deliveries and two special lines of which they were the sole agents, were named, Lady Bell Lager Beer and Imperial Stout. Every brand of cordial was made and South Australian wines were also available.

On 6 August 1900, Robinson & Higgins, The Grand Bottlers of King Street, Coolgardie registered their Anchor brand trade mark for The Grand Sparkling Ale in an oval, stating brewed from the finest malt and hops. This beverage had been available during the past 18 months.

GEORGE ROBINSON – He retired from the partnership on 31 May 1900. Where did he come from and where did he go? There were two other George Robinsons operating in Coolgardie, one a plumber and the other a florist. Unfortunately having a common name for the time, I can’t find out about his life after he left the business. Higgins continued on with the business and still used the Robinson & Higgins name.

In August 1900 Higgins renewed the gallon license for the King St premises and his ads now featured Quinine Tonic, the famous “Trilby” Hop and Ginger Beer and Champion “Buller” Ale and Stout.

Henry Gratte formerly of the Acme Co, Coolgardie was appointed manager in March 1901. He only stayed a few months before his appointment at the Eclipse factory in Northam. After he left his association with Higgins, a dispute arose about a discovery of 1012 bottles branded the Acme company and made in Melbourne for R A Stock of the Acme Co, but he was residing in Adelaide. A court case ensued and the bottles were taken by the local policeman and stored at the police station until ownership could be decided. Bottlers, often stacked other bottles not belonging to their company and kept them separated until a company representative called by and retrieved the bottles. However sometimes, this did not occur and bottles were refilled and given labels of the company holding the bottles. Higgins pleaded his case but was found guilty and ordered to return the bottles and pay a large fine.

He took over the Coolgardie Brewing and Ice Company bottling works in September 1903 and would now only bottle Toorak Ale and Stout.

In November 1903 he established a branch in Richardson St, Boulder. He manufactured aerated waters, cordials and ginger and hop beer at this site but still had his Coolgardie factory. Of course, moving to Boulder he had competition from Boulder and Kalgoorlie manufacturers. Consequently, in December 1904 after only 12 months, he called a meeting of creditors in the bankruptcy court and put the building up for sale in March 1905.

Because of the forced closure of his Boulder business he offered items for sale in November at his Coolgardie factory. Included, were excess items of a trolley & a pair of horses, 200 dozen plain bottles, a boiler, engine, No 2 Hayward Tyler aerated water machine complete, 2 large vats, 200 dozen Codd Patent bottles, 200 dozen assorted cordials, 6 dozen Sarsaparilla plus draught and bottled ginger beer.

Twelve months later he offered a reward of 5 pound on anyone convicted of infringing on his Anchor trade mark. He urged Marine dealers etc to check their stock. He had opposition from Arthur Scott at Menzies who also used an Anchor as his trade mark. Scott also issued a warning regarding any manufacturers who may have his bottles on their premises in 1908.

In November 1910 he was again before the courts accused of possessing 44 dozen bottles full & empty belonging to Dempsey & Gynn. He stated he bought bottles from marine dealers and placed his labels on bottles. He was ordered to return the bottles and to pay a fine.

Six months later he placed an ad in the Coolgardie Miner to buy any quantity of pint bottles. What did these bottles contain?

The world was changing in 1913 with the war soon to affect conditions for trade, manufacture, buying and receiving goods from overseas and Higgins placed an ad for beer bottles or any other sort of bottle for his factory in King Street. Glass from interstate may have been in short supply.

World War 1 intervened and Thomas Higgins was now nearly 49 years old. However, his duty for his country saw him enlist in January 1917 stating his age as 44 years with 3 children and wife Charlotte at King St in Coolgardie, and his occupation as cordial maker. He was away 2 years.

After the war he and wife Charlotte lived at 166 Collins Street, Kalgoorlie where on the Electoral Rolls he gave his occupation as cordial maker and railway employee in 1925. He continued to list his employment of the railways department until his passing. He was buried in Kalgoorlie cemetery on 9 July 1943. His wife Charlotte was buried here on 30 July 1937. Robinson & Higgins had 4 marble bottles. One is a small bottle and is acid etched with 4 tears, another has 4 tears and 5345 on the base & 195mm tall, another 4 tears and 235 mm tall & 4556 on the base & one has 4 tears and is 235mm tall. 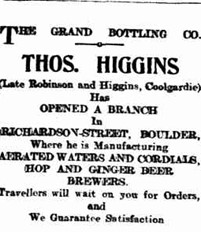 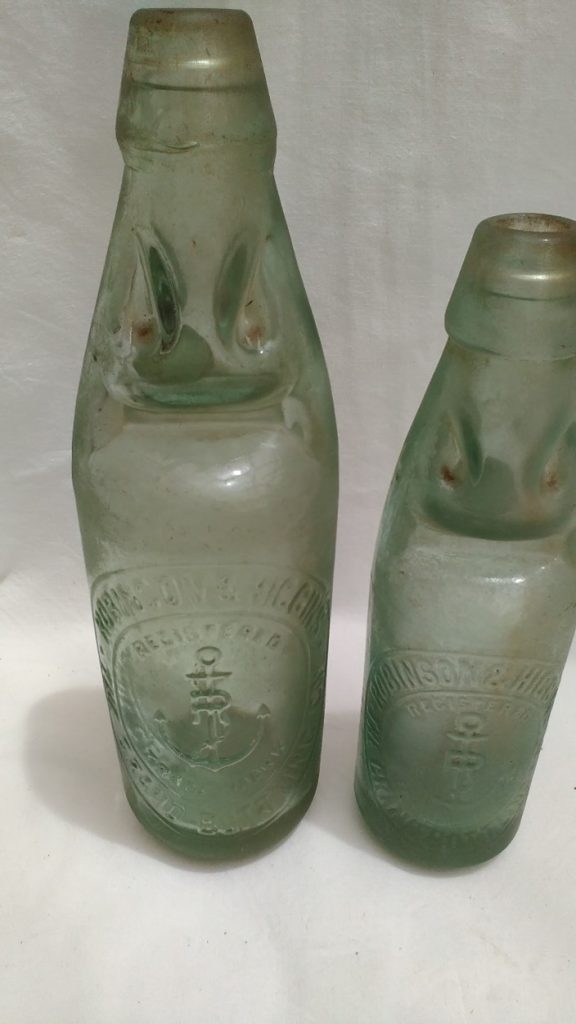