Charles Samuel Rhodes was born in Adelaide in 1868. He attended Prince Alfred College where he was awarded a prize in 1877.

He married Louise Adelaide Hawkes & encouraged by the gold rush in the West he moved to Broad Arrow about 1896. His brother in law John Bowbear Hawkes also came to Broad Arrow to mine gold in the area.

In 1896 Broad Arrow was a growing town with a resident magistrate, mining registrar, hospital, churches, police station, 5 grocery stores, chemist etc and a population of around 2,000 people.

The railway passed through the town in 1899 so this added to the growth of the area.

Rhodes opened a General Store with Thomas King and by 1900 he was appointed a Justice of the Peace.

By 1902 the partnership with Thomas King was dissolved and Rhodes carried on the business on his own account.

During his 8 or 9 years in Broad Arrow he also engaged in mining pursuits and had interests in the Sunset, Half Mile Consols and Rhodesia gold mines.

His store advertised Havelock Tobacco Watches for 3 shillings and 11 pence in 1904. Was this to encourage smoking in that era?

At Meckering he bought the General Store and in 1906 had settled into the farming community by continuing his duties as a JP, joining the committee for a new Town Hall and eventually being the committee’s Chairman for 25 years. He was also instrumental in the building of the Methodist church.

By 1918 Rhodes aerated water business had a Delco-Light electric motor to drive the machinery. His cool drinks and cordials went as far as Southern Cross by rail.

In 1927 he was President of the hospital board and owner of the electric light plant supplying the town and updated this facility in 1930.

The C. S. Rhodes of Meckering marble bottle has the name in a triangle and is made by Cannington & Shaw of St Helens, in England. The 13oz and the 6 oz bottles are quite rare.

John B Hawkes, Rhodes brother in law was also a storekeeper in Meckering after leaving Broad Arrow. He died in 1934 and Charles Samuel Rhodes passed away in 1936.

Rhodes was known as “The Father of Meckering”, and the store in Gregory Street passed to his surviving son Malcolm who continued to produce Rhodes Aerated Waters.

He was a general agent and still had the electric light station & in 1952 he listed the business for auction.

Malcolm Rhodes died in Perth in 1966. 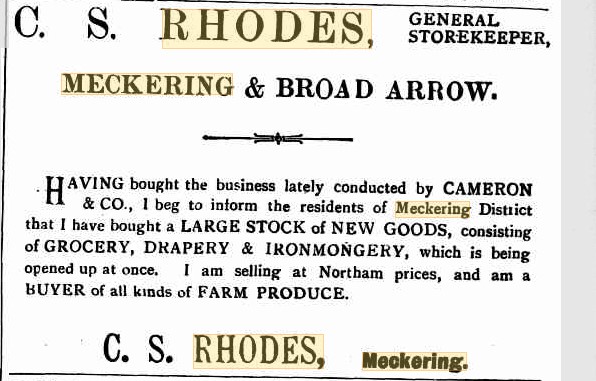 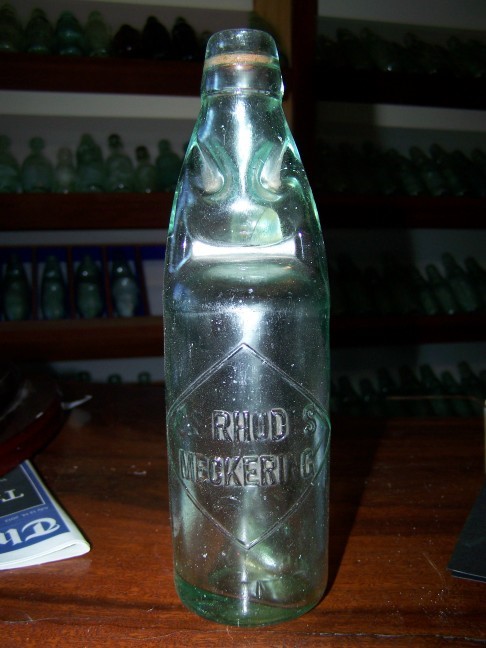