In November 1900, Kelly & Walker were the Proprietors of the Premier Aerated Water and Bottling Works in Johnston Street, Collie. They had a large 40’ x 20’ iron and wood building with 12’ high walls on Lot 535 and Edward Henry Kelly applied for a gallon licence for the premises at this time. Kelly & Walker continued to make cool drinks and bottle beer until January 1902, when the business was listed for auction.

Charles Horatio Giles became the next proprietor when Kelly & Walker transferred the licence on 14 February 1902. Giles, large ads in the local papers, mentioned he was a bottler of Swan Ale and Stout. Walker joined Giles in this enterprise for the first 12 months. They sold their aerated waters to hotels in boxes containing 2 dozen bottles and a cordial maker was employed plus a bottle washer and carter. On 13 June 1903, Charles Horatio Giles registered the PMR trade mark for the Premier Aerated Water & Bottling Works.

On 7 March 1904 Giles sold the business to John Patterson, late of Norseman. Giles, now moved to Leonora and joined the firm of Charles P Hobart, auctioneers, specialising in wines and spirits and the company were sole agents for Ferguson’s celebrated Houghton wines and the Famous Swan Beer. He eventually made his way to Terang in Victoria by 1914, as a land and estate agent and died aged 59 years in July 1933 at Elwood, Victoria.  John Patterson was the former Mayor of Norseman and commenced aerated water making at Norseman in 1898, first with Dixon and then on his own account. Giles, gallon licence, was transfered to Patterson on 19 Mar 1904.  By January 1910, Patterson was now bottling Swallow Ale and Stout and his lines of drinks included Lemonade, Ginger Ale, Apple Cider, Champagne Cider, Hop Beer, Dandelion Ale, Ginger Stout, Football Punch etc.

In December 1910 the premises changed hands and Eliazar Lazar Margolin was now the proprietor.  He was born in Bylelorod, Russia in 1885 and was educated at the Classical Gymnasium. Whilst in his teens, he emigrated to Palestine, with his parents and on their death, he came to Western Australia.  He arrived in Fremantle in 1902 and worked in Perth, Coolgardie, Kalgoorlie and Lawlers. He was naturalized in 1904 and eventually moved to Collie. Margolin ran his first ad using the PMR trade mark on 17 January 1911. On 16 February, Patterson transferred the gallon licence to Margolin and his ads featured the celebrated stone ginger beer bottles with the screw tops.  Another aerated water manufacturer in Collie at the time was J Gubgub, nearby in Throssell Street. Margolin, employed Jacob (Jack) Christinger who delivered the bottles in town. He was also Margolin’s cordial maker and acted as his manager when WW1 saw Eliazar Margolin, serve overseas in the war effort. Margolin, joined the 16th Battalion and left for Gallipoli in December 1914 (by coincidence my great uncle was also on the same ship but sadly is buried at Quinn’s Post). On his discharge in 1918 he had attained the rank of Lt. Colonel DSO.  He also was selected by the War Office to command one of the newly formed Jewish Battalions (39th Fusiliers) to be sent to Palestine and he served in this area, so his service to his adopted country was extensive. He returned to Collie in 1921 where a reception was held in his honour. In the meantime, his aerated water factory continued to use his name as proprietor from 1914 until 1917 and it did mention he was serving overseas. His four years  that he had resided in Collie before the war, had been the happiest he had spent in the west. By April 1922 he acquired an interest in Adams Motors Ltd of Perth and was also Sales Manager. He married Hilda Myrtle England in Perth in 1926 when he was 51 years old. Her mother lived at Boulder and she was 18 years his junior. They bought a home in Tyrell Street in Nedlands and he became Managing Director of United Buses in Claremont. He passed away in 1944 and Hilda died in 1990. The couple had no family. The last advertisement for his factory in Collie under his name, was in November 1917. Tenders were called to purchase the business on ¼ acre of land and included a 2 roomed cottage, plant for cordials, wines, spirits, stock of bottles, syphons, corks, gas tubes, made up cordials and raw material. Margolin’s cordial maker, Jacob (Jack) Christinger, also joined the services in 1916 and lost his life in France in October 1917, so Margolin had another person managing his factory from late 1915.

Philip Meagher then became the proprietor on 14 December 1917. He was born in Eaglehawk, Victoria in 1875 and spent time in Menzies, WA, where a son was born in 1902. He was the proprietor of the Horonda Brewing & Cordial Company in Hay Street, Subiaco (1912 – 1920). Even though he purchased the Collie factory in 1917 he concentrated his efforts at his factory in Subiaco. He was also licensee of the Crown Hotel at Collie and held such at the time of his death in 1929. Dennis Meagher, Philip’s brother, was licensee of the Crown Hotel in April 1930 when the licence was transferred from Walter Edmund Chick. Dennis and his sister, Sarah Meagher were living in Johnston Street, Collie, in 1938, where he was listed as a cordial maker. His last listing is in 1944 in Wises Post Office Directory. He conveyed the original parcel of land, Lot 535 Johnston street to the Collie Industrial Co – Operative Society Ltd on 11 April 1945. Dennis Meagher died at Collie in 1948 and his sister Sarah, died at Guildford in 1964. The brown and clear glass 26 oz crown seal modern bottles were embossed with the logo Premier Aerated Waters, Collie. 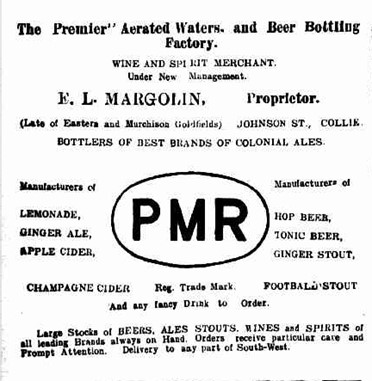 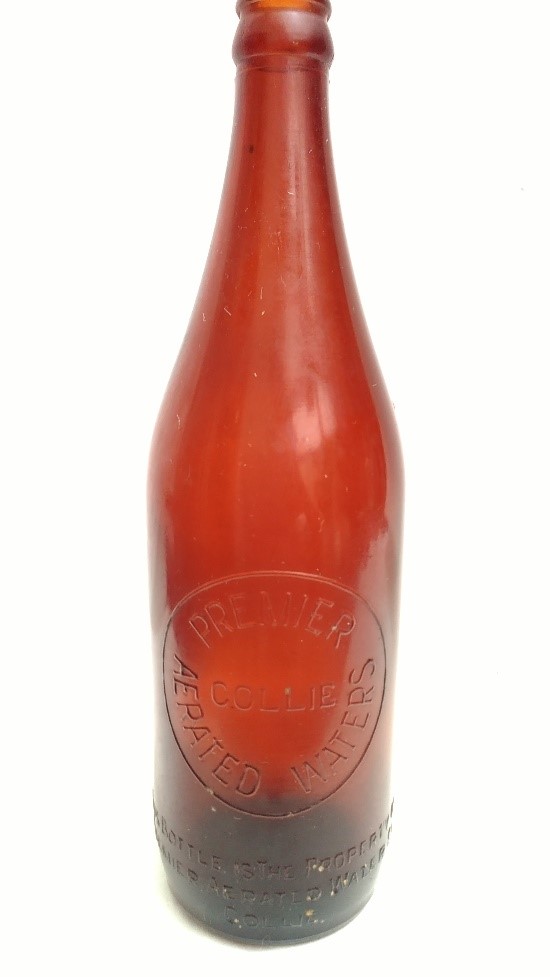