In 1915 this cordial, wine & spirit merchant’s property, was the business of William P Bromley. By 1921 until the 30’s Arthur Waterland became the owner and then Northey & Harridge began production of Aerated Waters in 1938.

Josia Albert Hedley Northey (known as Hedley Northey) was born in S. Australia to Henry & Clara Northey c1884. Hedley’s father Henry came to Kalgoorlie with his wife & some family members in the 1890’s where he conducted a successful bakery business. Son Hedley, also became a baker, was well respected in the suburb of Trafalgar in Kalgoorlie & married local girl Alice Basley in 1911. In April 1921 Hedley & Alice were entertained by the Eastern Goldfields Master Bakers Association where they were presented with a set of stainless steel carvers by Alfred William Sales, (previously proprietor of the “Rooster” trade mark AW Sales, Aerated Water Co, at Fremantle 1902 -1906).They were moving to Perth where Hedley acquired a property at 308 Lord St, E Perth. He became a newsagent & continued in this profession into the 1930’s. He then moved to 400 Fitzgerald St for a short time. I believe he met James Harold Harridge in Kalgoorlie where Harridge lived for a number of years or in North Perth as Harridge and his parents lived in this area in the 1920’s. Because of this friendship they formed the partnership of Northey & Harridge at 11 Harvest Rd, North Fremantle. This partnership was short lived as Northey was approaching his 55th year and may not have been well, so he retired on 31st December 1938. He Passed away 4th Dec 1941 & is buried in Karrakatta Cemetery. Alice Northey passed away on 4th June 1966 at Scarborough.

James Harold Harridge was born in Victoria in 1891. He moved to Boulder around 1912 as did his parents, James Henry and Margaret Jane Harridge.  “Harold” became a factory hand & married Gertrude Jones here in 1914. In 1922 he was a Confectioner in Boulder & on their move to Perth in 1924 his wife continued as a Confectioner, whilst living in Fitzgerald St, North Perth. They then lived in Farmer St, North Perth until the 1930’s, before moving to 13 Harvest Rd, North Fremantle next door to the Aerated Water premises. Northey & Harridge cool drinks began and included a rare Codd bottle as by this stage marble bottles were being taken over by the Crown Seal bottle. After Northey’s retirement, J H Harridge continued his Aces High Aerated Waters. The new beginning for Harridge, took a devasting blow when on 14th March 1939 his son Robert was tragically killed on Nicholson Rd, Cannington. He had delivered aerated waters to Gosnells and was returning to Fremantle when his vehicle over turned after skidding on the gravel road. In the rear were crates of empty bottles, so what a chaotic scene for the ambulance driver.

in Hampton Rd. In November 1943 he acquired all types & sizes of bottles & cases marked “Dux” or Percy Hill Aerated Waters. The Percy Hedgeland (Percy Hill being his stage name) factory of “Dux” was in Quarry Street, Fremantle but on their demise, Harridge could now use these bottles. Harridge continued until the early 1950’s & his wife passed away in 1953. James Harold Harridge died at Crawley 11th July 1964.

The premises were converted into the North Fremantle Cold Stores until its demolition.

In 1984 a collector noticed the Ice Works were being demolished & discovered remnants of bottles, glass etc around the building. Digging commenced and an estimated 200/300 smashed small and large Rowlands shooting star trade mark Codds were recovered. Amongst others were dozens of damaged Codds by Charlton Young, Leake, Charles Allen, R W Allen, George Saurmann, R M Moore, Briggs & son etc. Also damaged Ginger beers of Rose & Mann and Claremont Mineral Springs. Another collector also dug many damaged bottles and of about 600 Rowlands Codd that were damaged, 20 or more had “and Perth” printed on the back. Forty or so had the shooting star embossed on the bottom as well as on the face & none were found to have all three at the same time on the one bottle. They did get some undamaged bottles including Donaldson & Collins, Sarah Jane Leake, G F Seebeck, Rose & Mann, Letchford, Rowlands etc.

The site is now occupied by town houses.

I believe there is only one known codd bottle from the Northey and Harridge company. 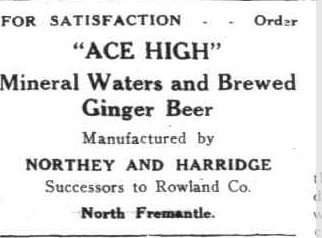 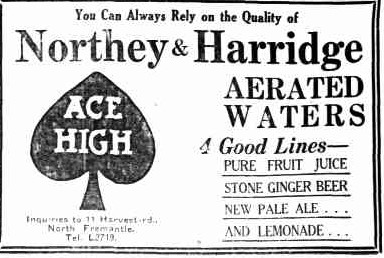 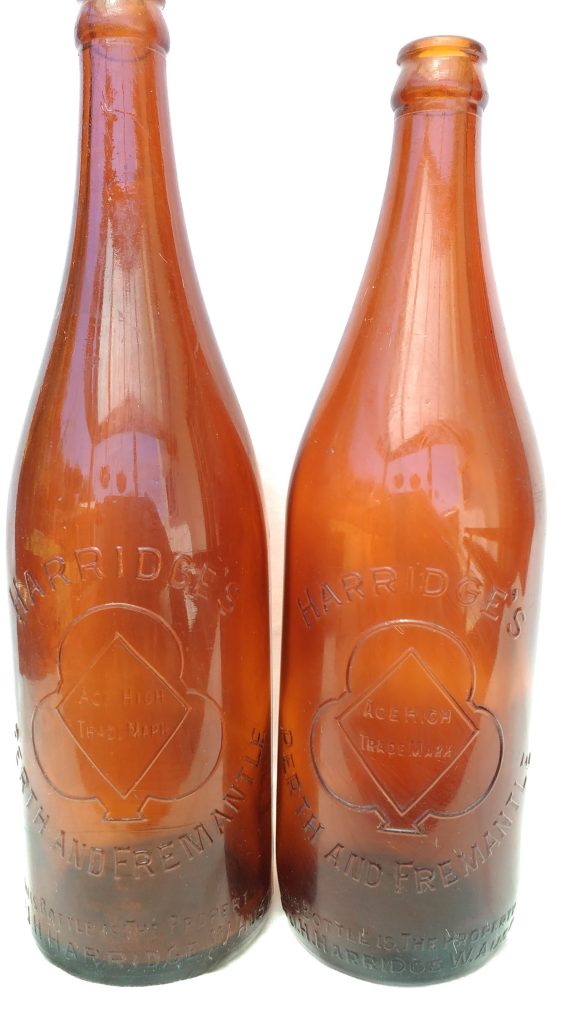 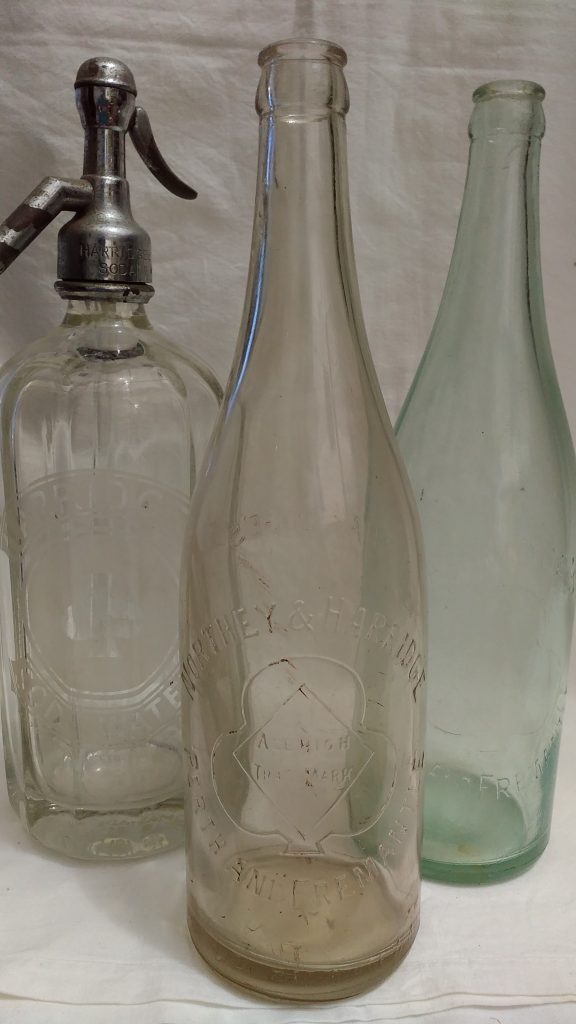