The Maskiell family business began in Victoria c1882 where Robert and his wife Mary nee Murphy had a pickle, sauce, jam and wine factory in Cobden St, Melbourne. Their trade mark was Roberts initials, R M. By the mid 1880’s he had joined Walter Bland in Macauley St, Melbourne making jams, jellies etc and on 21 March 1889 he dissolved the partnership and left the company to be carried on by Bland. Maskiell then joined the Wandin Growers, in jam making for a short time before joining with his brothers in a factory at North Carlton in 1902. Whilst here, Maskiell Bros were prosecuted for using the brand name “Hercules” which was a trade mark of rival company, H M Leggo & Co Ltd. All tomato sauce labels had to be destroyed and notices placed in newspapers stating the nature of the offence. Robert and Mary lived in Northcote at the time but by 1905 most of the family decided to make Western Australia their home.

Robert is listed as a factory hand living in Fremantle with his wife Mary and their married son Robert Henry Maskiell and his wife Elizabeth Elvira also came West. Son Robert, joined the company of Ross & Co, wholesale confectioners and sauce manufacturers of South Fremantle. Robert Henry Maskiell was then appointed manager of the Ross & Company factory at 219 Dugan St, Kalgoorlie in 1905. He stayed here until approximately late 1906 when A D Wing & Co bought the Ross factory near the corner of Lionel St and Dugan Streets in Kalgoorlie. The wood and iron building was gutted by fire in July 1907. In the meantime, Robert Henry Maskiell’s father had formed a partnership with Alexander George Ross under the name Maskiell & Co of 13 Samson St in East Perth, manufacturers of jams and pickles. Ross & Maskiell dissolved their partnership on 4 November 1908 and the company went into liquidation in May 1909.

A new company was formed In January 1911 named R H Maskiell Ltd. There was capital of 5,000 pounds, in one pound shares and the company would soon advertise for supplies of figs, apples and tomatoes from local growers and they wanted to be known as “The Sauce People”.  In 1912 Robert(senior) now lists his occupation as traveller and living in Hay St, Perth. The firm displayed their wares in large volumes at the Royal Show and in their first year of operation (1911), won 1st and 2nd Prizes for pickles and tomato sauce against I expect, many Eastern States and local companies. They also were sole manufacturers of Royal Navy Essences, vinegar and Worcestershire sauce and made cordials bearing the Royal Navy name. They gave away sample bottles of their wares to visitors at this show.

Another advertising gimmick was “a reward of 5 pound for the first parrot or cockatoo brought to our factory which can say – “Royal Navy Special Pickle”. In 1912 the show results were again promising and R H Maskiell was mentioned in the comments, of his Goldfields and Eastern States experience. The company required 150 tons of Tomatoes and plums, plus 100 tons of figs and apples and 40 tons of Cape gooseberries for the coming season. Their show display was bought by Bennett and Burnside of Perth, Fremantle and Subiaco to sell through their grocery chain. At the 1913 show Boans store purchased their exhibit and offered Pickles for 7 shillings a dozen bottles, Jams for 7/6 shillings a dozen glass jars, special chutney 10 shillings a dozen bottles, tomato sauce 5/6 shillings a dozen bottles and cordials 11 shillings a dozen bottles. (I wonder if any cordial bottles exist in collections today). Boans placed a large display of Maskiells products in their window near their Murray Street entrance.

Tough times would soon emerge for the company. Corks for Bottles etc was increasing in price. The Government wanted the tax increased on cork so for all manufacturers of condiments, cool drinks etc and this added charge would need to be passed on to customers. Maskeills, used about 300 gross corks per month and employed 10 men and 15 women and increased the workers to 25 or 30 in the fruit season. The price of tinplate and sugar were also issues for the company. Even with trying conditions they moved from Golding street to new premises at 567 Newcastle street, Perth in 1914. They built a new plant for fruit and tomatoes and the building had a frontage to Newcastle st of 183’ and a depth of 241’. The front was brick and the rear wood and iron. The floor space was 18,000 square feet and they used an imported Scott sterilising plant for canned fruit etc. The cellar housed empty tins, cask of vinegar, hog’s heads of onions, cauliflower, cabbage, beans, cucumbers etc in brine. In 1915, I believe it was the cucumbers etc in brine which caused the downfall of the company. In a court case, even though trivial, about storage of produce in the old Golding Street factory, caused the authorities some concern. Some casks of brine had deteriorated and were unfit for use and some casks had been found in the new factory. Litigation began and soon the factory closed its doors. Richard Howard was the sauce maker and he had 9 years experience in the trade. The firm still wanted tinsmiths for soldering cans in February 1916. Robert Maskiell senior’s wife Mary passed away in 1918 and F H Stephens & Co, Vinegar Brewery bought the 4 Golding street, factory in West Perth. Sometime after 1916 the company sold their Newcastle Street factory to the AFL Fruit Canning company.

The AFL Fruit Canning & Trading Company used the Newcastle street factory in September 1918 for jam making. They searched Australia wide for a manager to no avail, so employed Robert Henry Maskiell. H Raynor who had experience with Henry Keillor & Son Ltd of Dundee and London and the Rosella Preserving Company in Richmond Victoria was asked to evaluate the viability of the enterprise as the firm needed Government funding, however no funds were extended so the AFL Fruit & Trading Company folded. R H Maskiell lived in Venn St, North Perth at the time and in 1922 had moved back to Victoria as a manufacturer and lived in Balmain. His wife, Elizabeth Elvira Maskiell died in 1932 and her husband Robert Henry Maskiell passed away in 1941. At the time of his death, he lived in Northcote, Victoria. His father Robert Maskiell died in Perth in 1936. 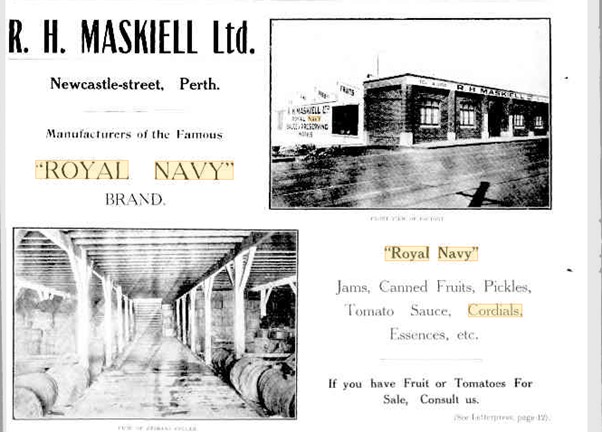 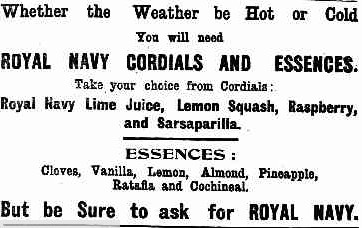 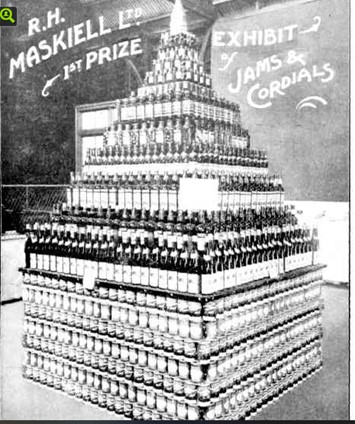