Exmouth was used as a military base in WW2 & as a rest camp for submariners with nearby Learmonth airfield constructed to provide fighter defence for the area. However, the town itself was not established until 1964 to support the United States Naval Communications station, Harold E Holt.

A settlement for fishing & farming had been here in this remote area of our coast many years before, but the building of the Harold E Holt base made the town what it is today.

After the war, many Europeans sought refuge in Australia as a new home to escape the ravages of their war torn homelands. Among these were Latvian migrants Alexander Spange, Auseklis Avens & others.

These men decided in 1965 to venture north to Exmouth in view to establish an aerated water factory to service the expected influx of people, being fishermen, trades people & of course employees & their families of the new Naval base. Upwards of 2,000 people were expected, so the men had hopes, especially with the heat of the summers in the NW, of running a successful enterprise.

The floors of such premises shall be of approved construction and materials, and shall have a sufficient fall to a trapped gully or other approved receptacle outside the building, and such floors shall be thoroughly washed down daily.

All yards adjoining, and sheds and outbuildings to such buildings shall be kept clean and free from any rubbish, garbage, or offensive material.

All tanks (or other receptacles) in which water is stored and which is intended to be used in the manufacture, shall be provided with an impervious tightly fitted cover, which shall always be kept in position, such tanks or other receptacles shall be emptied and cleaned throughout at least once in every 12 months.

If filtering apparatus of any design is provided for filtering water before use, it must be cleaned and boiled at least once weekly.

Between each time of filling, bottles must be soaked in a trough of water, must be thoroughly cleaned out with a brush, well rinsed by being placed in a vertical position over a jet of water, and must be drained after rinsing and before filling.

If bottles are not filled within 24 hours after being cleansed, they must be kept mouth downwards until used.

The water in which water bottles are soaked before they are brush-cleansed must be changed at least once daily.

No lead pipe shall be used for conveying any part of the materials either gaseous or liquid, which enters into the composition of the cordials, unless it is lined with tin or other approved materials.

Syrups must be stored in well-made, impervious receptacles, with an impervious tight fitting cover.

Nimitz Street is to the south of the town off Murat Road & in the Industrial part of the town at the time.

The factory was quite large & included a kitchen, laundry, bedroom and toilet, besides the area to produce cool drinks.

Two months after his application for the license on 2 June 1966, Alexander Spange was accidently electrocuted. His sudden death left a devastated wife and young daughter in Perth. The fledgling company was left in disarray.  Mervyn Gee born in 1924 & working for the railways at Gwallia in 1958 was asked to be managing director. He applied for a license for a” Snackburger” van for the site so even in the beginning big things were envisaged for a growing town.

Peter Murphy & G McGlinn were also connected to the company in 1966 & early 1967 so expect with the sudden death of Alex Spange, management worries were a concern at the time.

By August 1967, fellow Latvian migrant Auseklis Avens (1925-2006) applied for a milk vendors license for 2 Nimitz St. Avens had arrived in WA in 1949 and he bought the Freehold title to the property in 1969 but by 1970 the Vitaljich family had acquired the property.

In 1970 the aerated water factory, snackburger van etc had expanded and Laurel & Andrew Vitaljich, the new owners, had now added a fruit & vegetable stall at the premises. However, in late 1971 the Vitaljich family sold their interest in the business to Exmo Transport and so ended the short lived aerated water business for Exmouth.

Today 2010, the site in Nimitz Street is now occupied by Auto Pro a car spare parts company & Exmouth is a tourism hub for the Ningaloo reef on its doorstep.

Some collectors have the 7, 12, & 26 oz ceramic label NW Aerated Waters bottles in their collections but they are scarce because of the short life of the company (1966-1971). The blue & white label features the coastline and a communications tower from the naval base. There is also a 26 oz bottle featuring the same label but stamped Geraldton not Exmouth. I have not discovered the details of its connection to the Exmouth company as yet, so that will be another story. I believe this bottle may be from 1972 as it has the logo of the map of WA featured on the back of the bottle whereas the Exmouth bottles do not have this feature. Also, the Geraldton label has a blue border around the edge of the ceramic label.

During the 1970’s many small AW companies in country towns folded and with better transport links, cool drink deliveries from the city proved more economical. 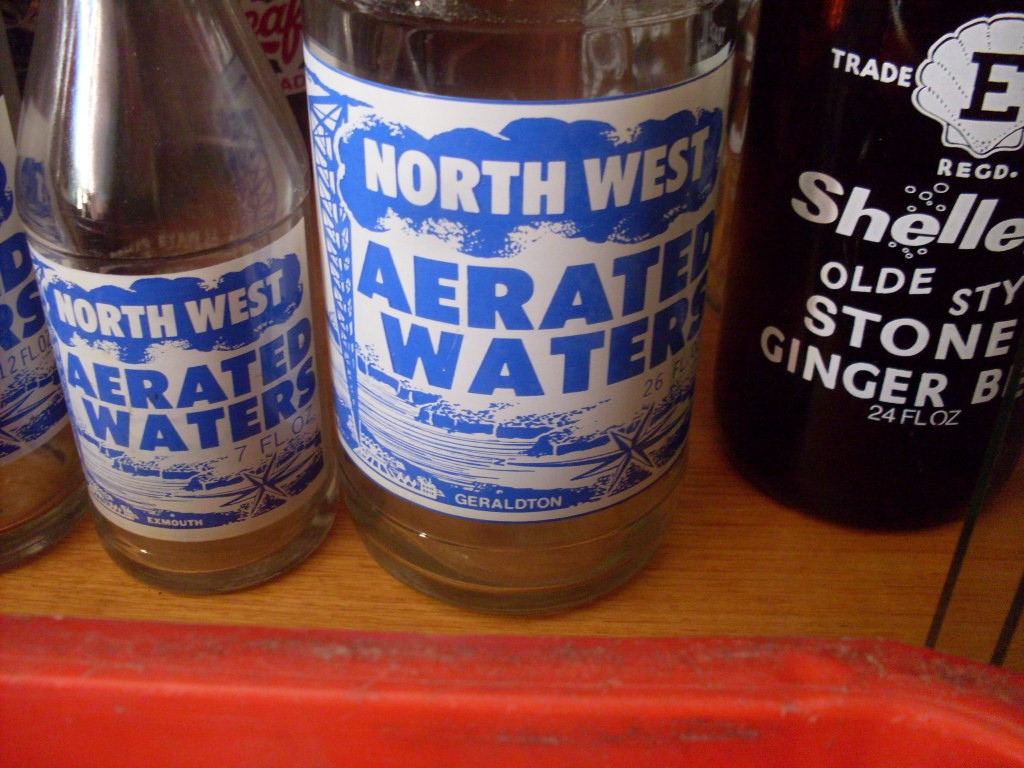 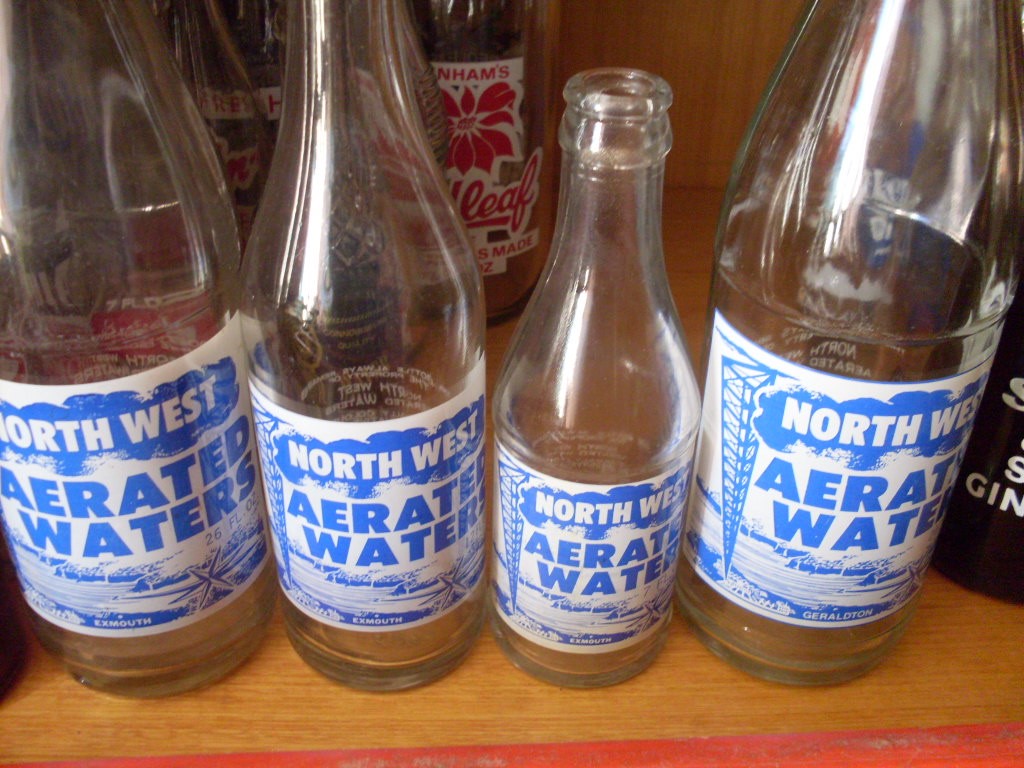