Richard and Katherine Nettle had 8 children born in South Australia, before the lure of gold in the West saw the family move to Norseman around 1900. Richard was employed as a miner as was his son Charles Harden Nettle born in 1881. Another son John Edward Nettle born in 1892 was a blacksmith in the town by 1914.

RICHARD LESLIE NETTLE —- He was the 6th child of Richard and Katherine, born in 1890 in S.A. and formed the Premier Cordial Factory in Princep Street, Norseman around 1914 with Robert Moore. This partnership was dissolved on 16 October 1915 and Robert Moore carried on the business. Moore was also the proprietor of the Crown Cordial Factory at 147 Dugan Street, Kalgoorlie. Richard married Ada Adelaide Ridgewell in 1915 and he moved to Kalgoorlie with his wife and joined his brother John Edward Nettle at the Crown Cordial Factory in 1916. The Crown Factory began in 1901 by Jacob Asher, Thomas Powell, Peter Cox and John Ernest Bell. RT Hager was manager in 1910, Patrick Whelan 1912, Robert Moore 1914 and then Richard and John Nettle. They still used the Crown trade mark but added Nettle and Nettle to their bottles. The partnership of Richard and John continued till 1923 when John and his wife moved to Leederville and he became a groom. Richard continued at 147 Dugan Street till his death in 1950 and is buried in the Methodist portion of the Kalgoorlie cemetery. He had been ill for sometime and he was a very respected person in the goldfields. He won many golfing trophies and was a President of the Goldfields Golf Association and left a widow and two daughters. The large funeral attracted members of many organizations and businesses including Kalgoorlie Bowling Club, Croquet Club, Lodge, Tattersalls, Crown Cordial Factory Racing and Golf Clubs. His bottles include Crown seal ginger beers and other crown seal aerated waters. The Crown Cordial factory is listed in the W.A. Country Business Directory of 1954 and may have continued after that date.

CHARLES HARDEN NETTLE—– He was the 3rd child of Richard and Katherine Nettle and married Eva McKenzie in 1912 at Norseman. He is listed as a cordial maker there in 1916 when his brother “Leslie” transferred the Gallon Licence of the Premier Bottling Works, Norseman on 5 Feb 1916. He had previously spent some years as a miner, like his father. In 1920, he is again listed as a miner although his name is linked to aerated waters at Norseman until early 1924 when he transferred the Gallon Licence on 19 May to Henry Frederick Hollow. By December 1924 he had moved to Pinjarra with his wife and two children. Sadly, for bottle collectors no known bottles exist for Charles Nettle’s factory in Forrest Street, Pinjarra. I expect all his bottles had paper labels. He continued to produce aerated waters here until 1938, even with opposition from the large companies like Mackays and Letchfords advertising their wares in the local paper. He moved to Canning Highway in Como and died in 1939 giving his occupation as aerated water manufacturer and carrier. His business transferred to Roy and Elizabeth Stock in 1939 and they changed the name to Pinjarra Cordial Factory. It continued until mid 1940 under their name. (See Pinjarra Aerated Water Manufacturers story on this site for more information). 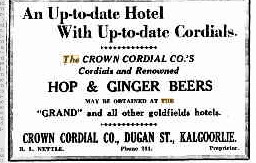 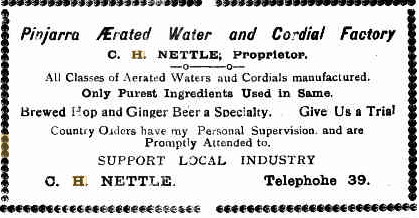 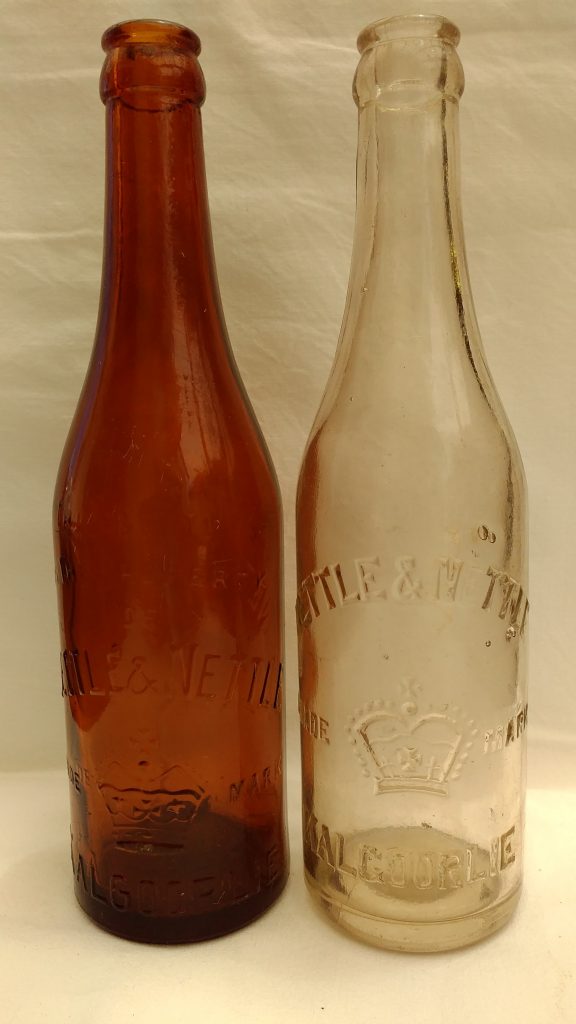 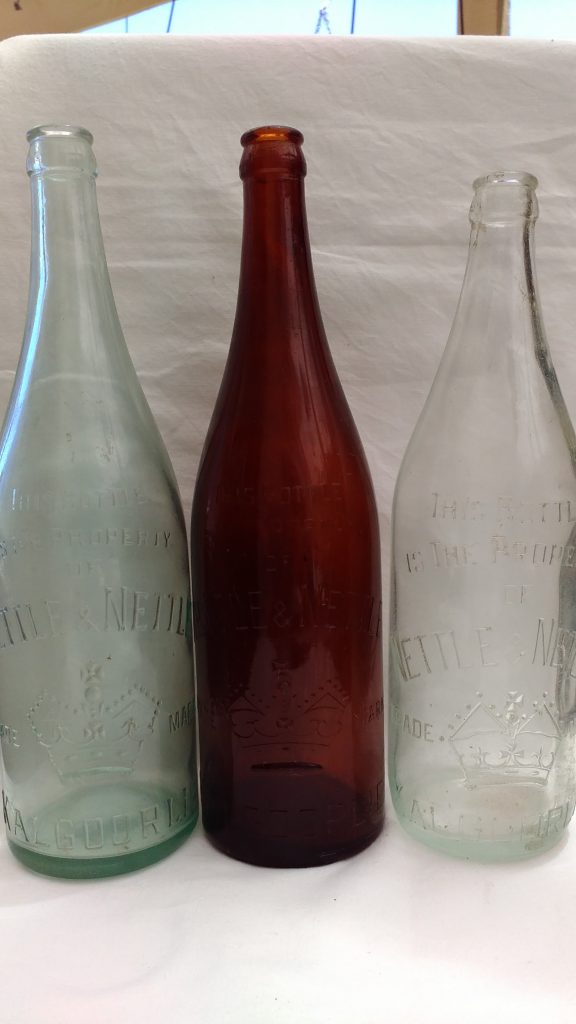 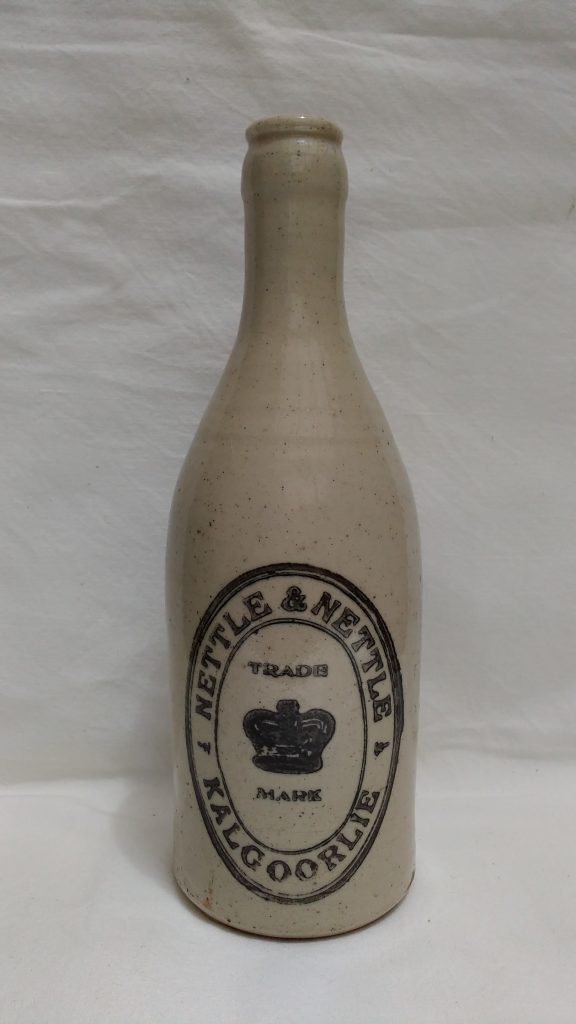 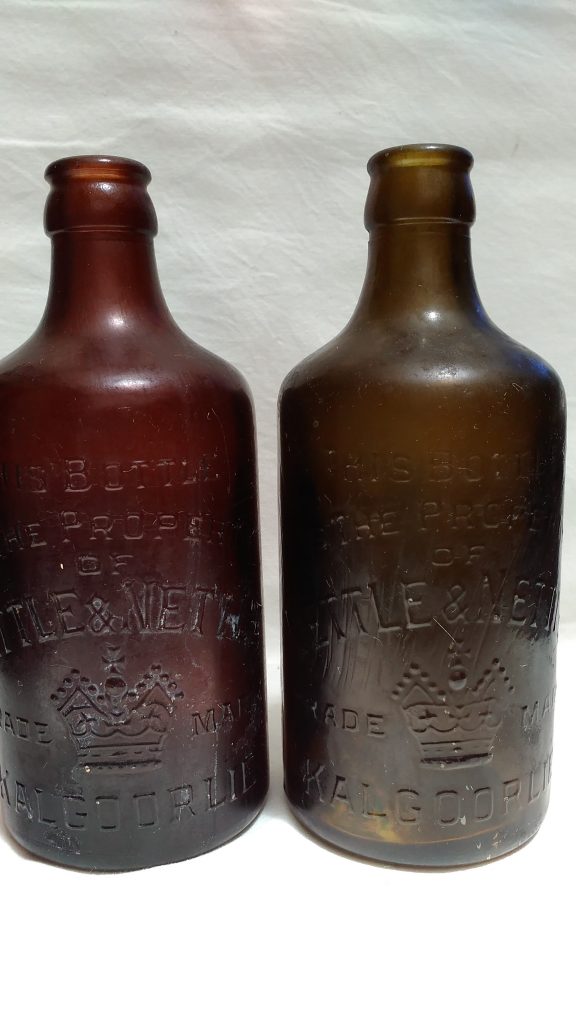 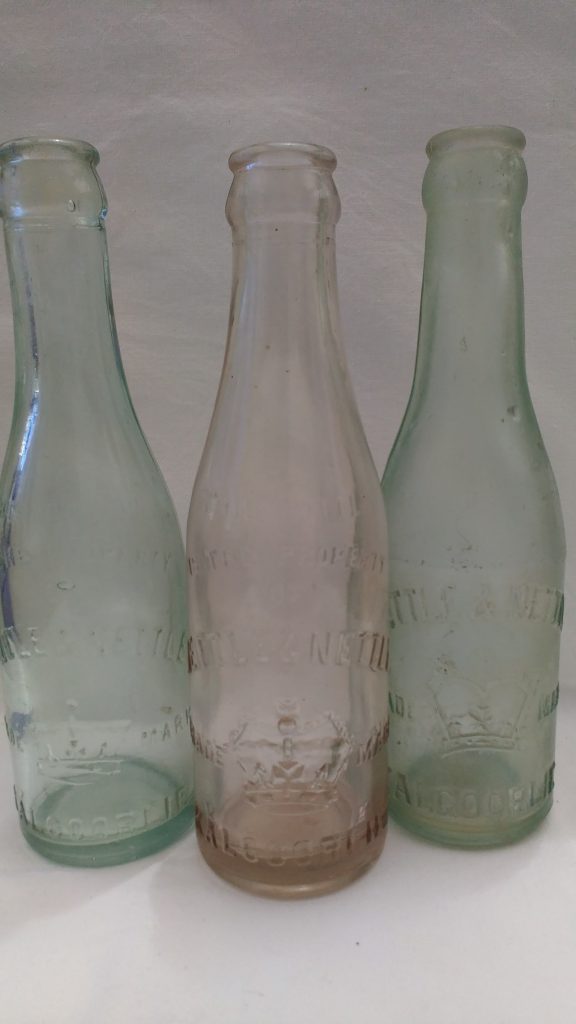