Francis Richard Honey was born 3rd August, 1866 at Peckham, Surrey, England, the second of four sons and one daughter to parents William and Clarissa Honey.
Known as Frank and excelling in mathematics at school he took up a maritime career seeking to become a master mariner.

In his 20th year he sailed aboard the three masted barque Otagobound for Fremantle and was employed as an Assistant Purser on that voyage.

He suffered the misfortune of breaking a leg on the voyage and this influenced him to be discharged from the Otagoon arrival at Fremantle. Within a month he was working as a storekeeper in Fremantle.
In 1887 he took out timber cutting licences in the Darling Range and continued in this trade part time till 1890.
During this time he also worked as an assistant to Government Surveyor Charles Price and helped set out land and building lots at Fremantle, Greenmount, Kwinana and Rockingham.

This was a busy time for Frank as in 1887 he also built his first small weatherboard general store in Frederick Street, Midland Junction.
This was strategically placed on the road north to farmland along the Swan River.
This store he named “The Premier Cash Store” and Frank supplied essential provisions to the Swan Valley settlers and surrounds.
By early 1890’s Frank was described as a merchant and importer. He built his second store again strategically placed on the corner of what is now Morrison Road and Commercial Road (now Great Eastern Highway), Midland Junction.
He provided groceries, draperies, boots, tinware, ironmongery and general produce.
He would have supplied provisions to all manner of people heading east toward Kalgoorlie and north to the Murchison Goldfields and Geraldton. Honey also became the Postmaster for the town and surrounding region running the mail service from one of his general stores.
He resigned from that position around May, 1894. By May 1897 Midland Junction had grown to a population of 1000 residents so before this time it was quite small compared with the main nearby regional town of Guildford.
Frank Honey had become a prominent figure and served on the local council from 1895 to 1902. He was elected Mayor of Midland Junction for the period 1898 and 1899.

On the 28th August, 1898 Frank Honey married Stella Hodgson of South Gippsland, Victoria.
At this time he built two houses in Byers Road, West Midland on land behind his second Premier Cash Store in Commercial Road.
In 1901 the family moved into their new stately colonial home at 43 Newcastle Road (now Great Northern Highway) and situated directly to the south of the Osborn & Cavanagh aerated water factory which was established in 1897.
In 1902 Frank purchased 200 acres of farming land alongside the Moore River at Regan’s Ford.
Honey had invested wisely in a number of properties including building lots at Greenmount and commercial properties in Midland Junction.
In 1904 Frank was appointed as a Justice of the Peace so he acted as both local Magistrate and Coroner.
He had become a dominant and respected person in Midland Junction.

Frank Honey had indeed invested wisely and in 1906 at the mere age of 40 he retired, leasing out his produce businesses in Midland Junction, The family then travelled extensively including England and Scotland returning to Midland Junction via Victoria.
In 1911 Honey purchased 100 acres of land near Mariginiup Lake located near Wanneroo and Honey Street exists today in Mariginiup, named after him in 1967.
On the 9th January 1913 Frank Honey came out of retirement and purchased the aerated water works of Osborn & Cavanagh from Francis Osborn Cavanagh.
Frank Honey commenced trading as The Midland Junction Aerated Water Works.
In order to supplement existing bottle stocks from Osborn & Cavanagh, Honey purchased 1440 (10 gross) blue blob top stone ginger beer bottles from the Bendigo Pottery Works in Victoria.
This is recorded as between December 1913 to January 1915.
He also had made an unrecorded number of similar brown blob top ginger beer bottles also made by the Bendigo factory.
At a later date, stocks of crown seal ginger beer bottles were made by Fowler Pottery Sydney.
The stamp on these blue and honey coloured top crown seal ceramics showed Fowler Pottery Sydney 1916.
Honey also used 12oz and 6oz Niagara type marble bottles made by Cannington Shaw, St Helens, England and 12oz and 6oz Dobson type marble bottles made by the Adelaide Glass Works.

There was indication the factory was taken over by the Wattle Aerated Water Company of Midland Junction as an auxiliary outlet and the date 1932 coincided with the time the Wattle Company was wound up.

Frank Honey had indeed had an adventurous life. 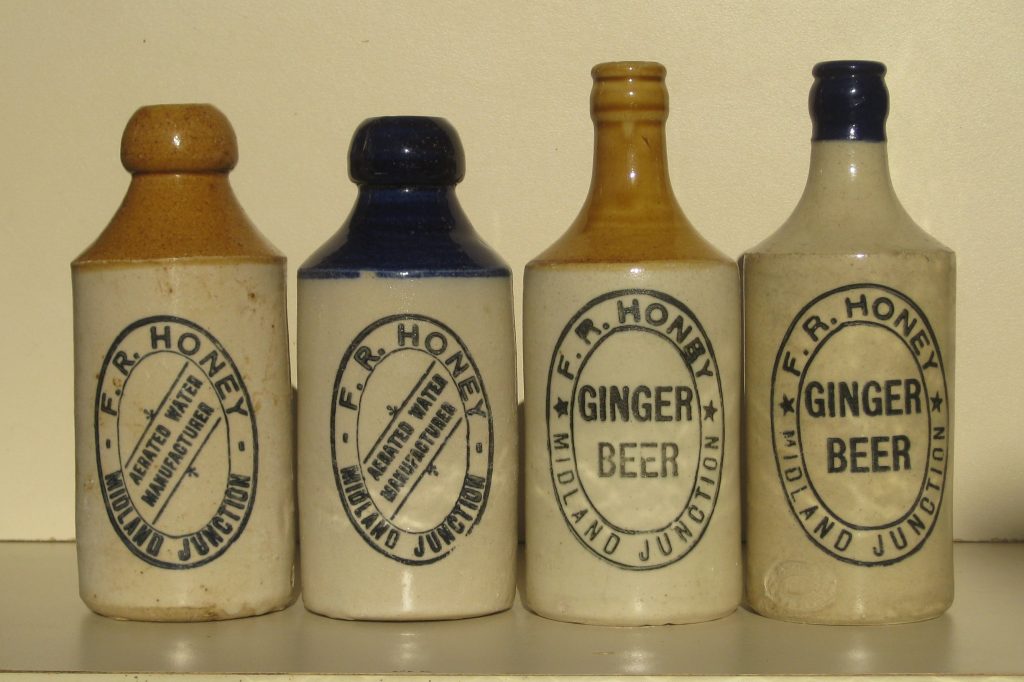 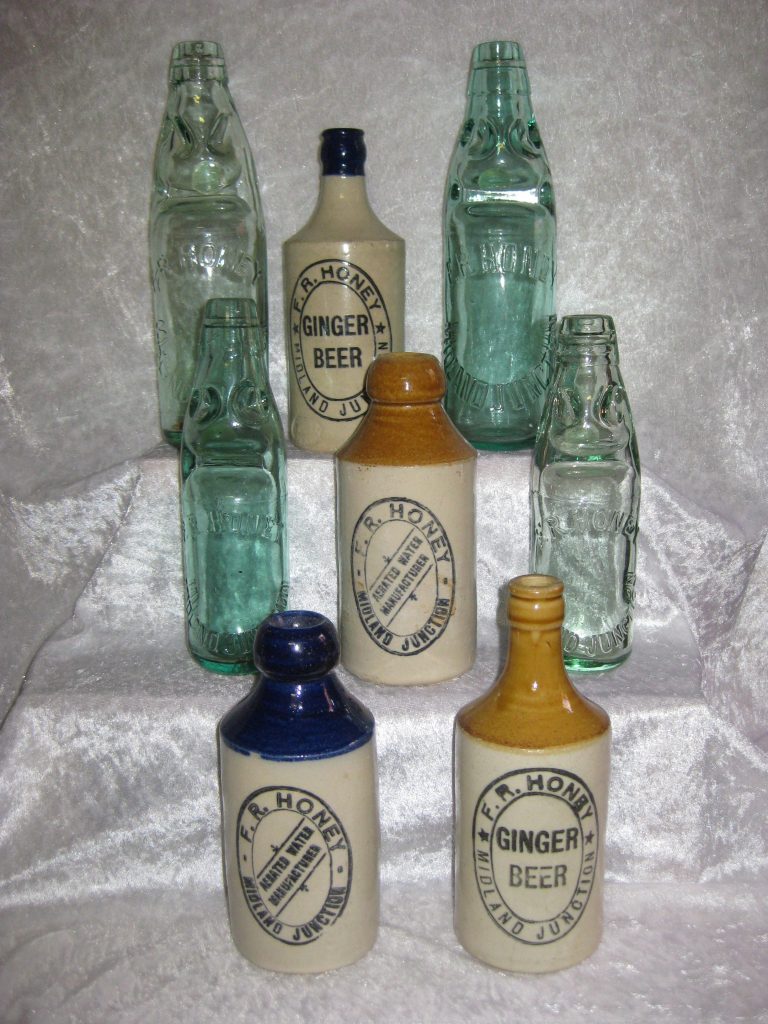 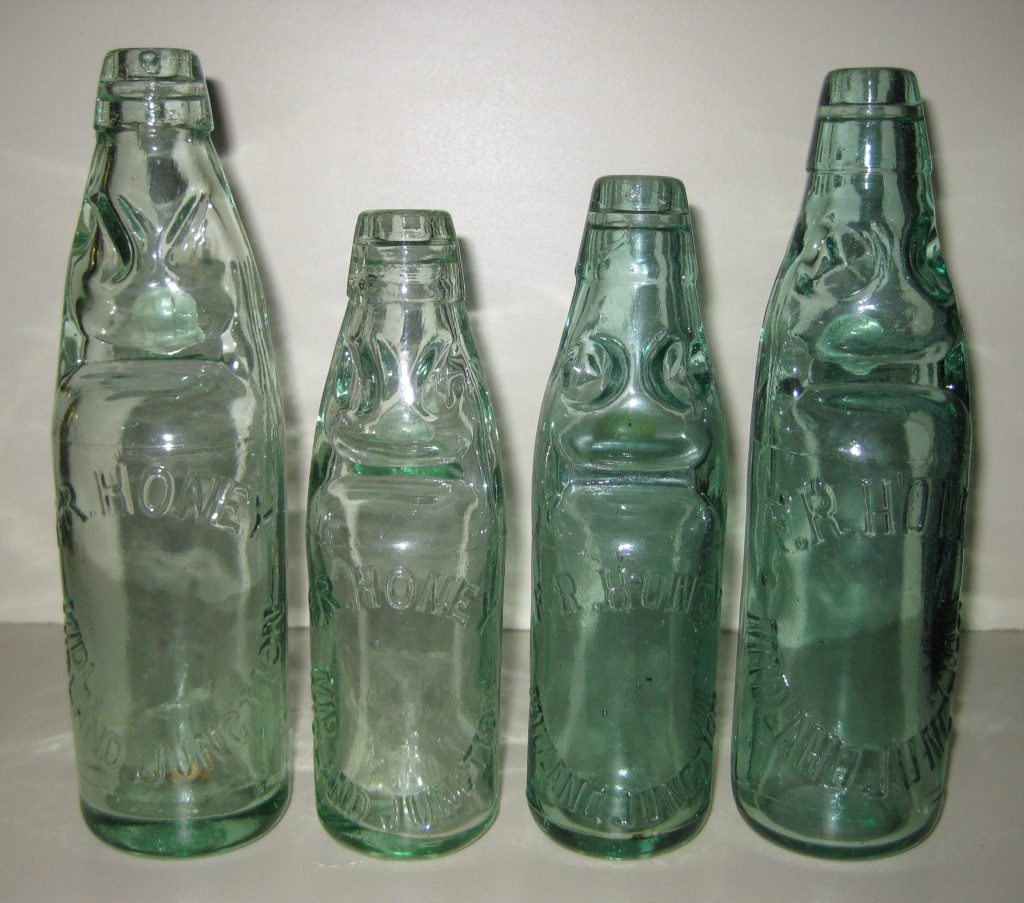 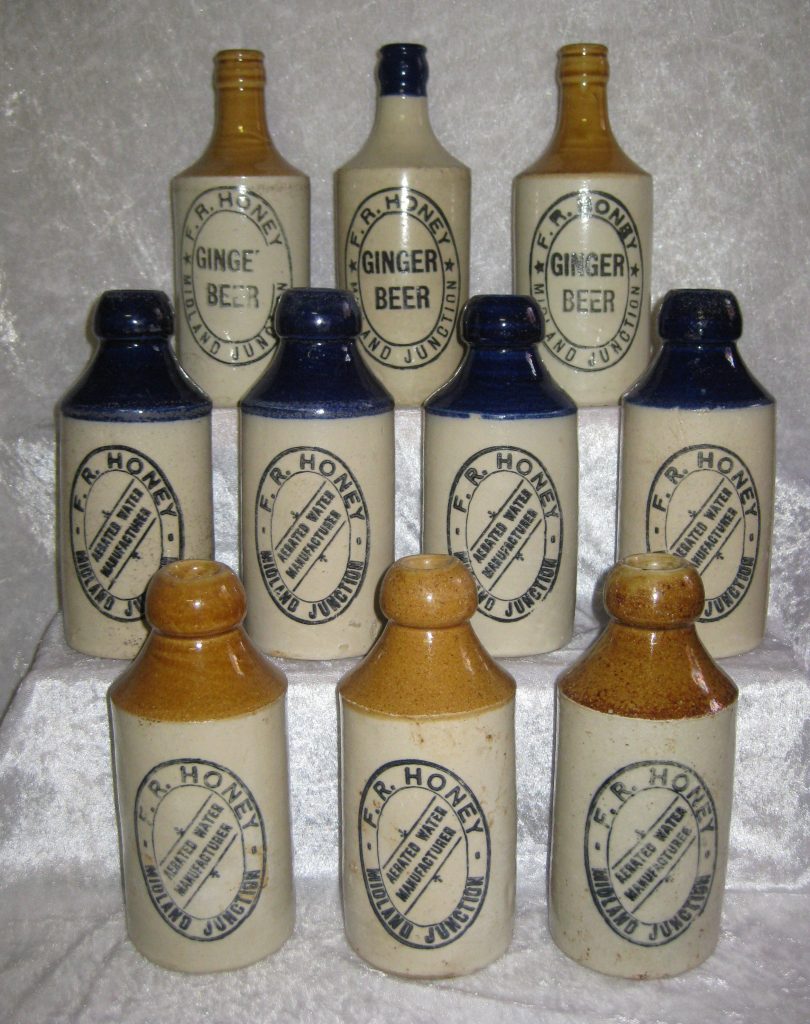 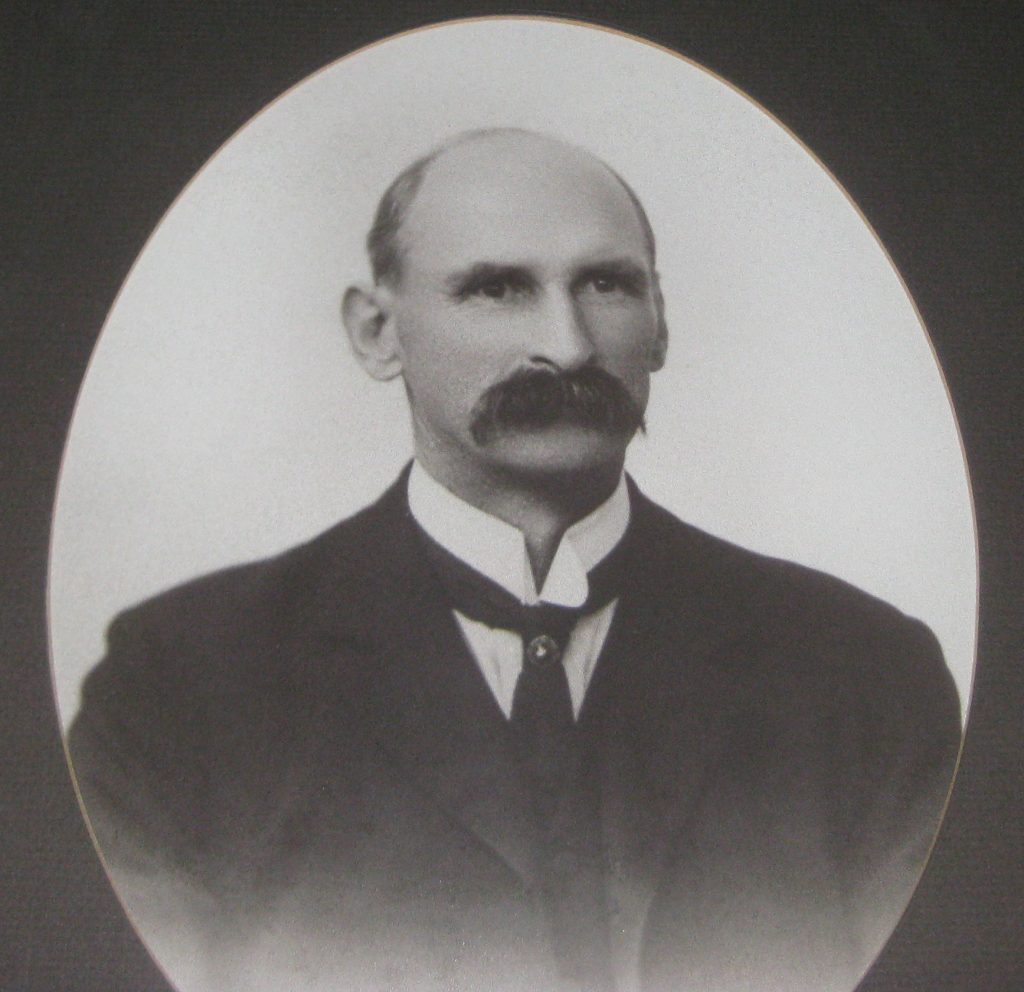