The Lambert family originated in Cardiff, Wales, where Henry Lambert was born in 1854. He worked for the N E Railway Company as a steam raiser before being promoted to a guard’s position. In his employment, he found his way to Middlesbrough in Yorkshire where he met Mary Jane Colley and they married here in 1879.

Son HENRY ERNEST LAMBERT, was born in 1881 followed by FRANK LAMBERT in 1882. Henry had seen advertisements about the Great Southern Railway in Western Australia where workers were needed to build the line so in August 1886 the family left England on the “Gulf of St Vincent,” arriving in Albany in October.

Here Henry senior, was employed on the foundations for the town hall and then joined the West Australian Land Company as a foreman on construction of the many railway stations on the Albany to Beverley line. Once the line was complete, he applied for a position as a guard on the 1st train to run on the line.

Another son PERCY LAMBERT was born in Albany in 1890 and so completed their small family. Henry stayed with the railways until 1898 and then commenced business in Albany. He died aged 91 years in Albany in 1946. He lost his wife Mary Jane when she fell, hitting her head and died, while on holiday by boat to the Eastern States in 1921. She was buried at sea.

He was 5 years old when he arrived in WA with his parents from Middlesbrough in 1886. By 1906 he had moved to Pingelly and started an aerated water factory in Queen street and exhibited some of his wares in the Narrogin show.

That same year he commenced business as an aerated water manufacturer in Forrest Street, Beverley next door to the White Hart Hotel, where his brother Percy had interests in a green grocery store. He escaped serious injury when filling a soda water bottle which burst and he received a cut near his left eye. This occurrence in the early days of manufacture happened often. His specialty brew was Ginger Ale and Ginger Stout available at his Pingelly and Beverley premises. From 1910 he concentrated his business interests in Pingelly whilst brother Percy carried on in Beverley.

In 1910 he expanded into the latest craze of phonograph music when he opened a depot in Parade st, Pingelly. He also delivered aerated waters to the door at a cost of 4 shillings for 2 dozen bottles.  In 1909 he built a skating rink on the side of the aerated water factory and installed electric power to run the factory and the nearby hotel. In March 1911 Pingelly needed an updated Electric Light plant so he commenced building a brick building for this purpose. Picture shows were also held in the skating rink premises 2 nights a week.

Henry’s “CROWN” factory had a catastrophic event at the worst time of the year when in December 1911 an explosion occurred. He was engaged in making aerated waters when the machinery exploded, wrecking it completely. He escaped with shock, but the loss of production at the busiest time of the year was a blow for his enterprise. He purchased a new Engine for the Electric Light works in 1912.

Bottle shortages in 1913 caused Henry to advertise “he would buy any quantity”.

Henry and Elizabeth lost their young daughter Irene to bronchitis in 1914.

Henry now invested his money in a new venture in Albany with his brother in law SAMUEL CHARLES MEYERS. They called their factory the IMPERIAL AERATED WATER COMPANY, and were open for business in April 1915. The premises was situated in Perth Rd, close to York St and was a brick building on a large block with ample room for additions. The floor had a special glaze making it impervious to dirt and grease and the walls had a damp proof composition and high skirting so no dust could accumulate on the walls close to the floor. All the modern A W Machinery was installed & the syrups and essences were kept in glass enamel or Doulton containers with electro plated fittings. A large supply of filtered water was stored in tanks & high pressure automatic washers with brushes, cleaned all the bottles with a final rinse from town water.

Lambert continued with his skating rink in Pingelly and also became the proprietor of Kings Pictures in the town.

LAMBERT & MEYERS dissolved their partnership in the IMPERIAL AERATED WATER FACTORY in Albany on 30 Apr 1916 & SAMUEL CHARLES MEYERS became the sole owner but continued using the Lambert & Meyers name. The trade mark for this bottle had a triangle with the word Imperial in its centre and a crown at the top and two flags, the Australian and English flags.

Lambert continued with his business interests in Pingelly but in 1918 he was once again involved with the Albany factory and moved his family to live here.

Because of WW1, bottles were in short supply, so he advertised in the Albany Advertiser in March 1919 that he wanted 1000 dozen beer or spirits bottles, but no bottles that had contained oil. He would pay 1 shilling a dozen. By October shortages were still critical so he instructed hotel and shop keepers to levy a fee on all his bottles sold and on return to the shop or hotel a refund would be given. Patent bottles had a fee of 3d, quarts/beer bottles 1d and pint and polly bottles 1d.

In June 1920, he took a holiday to England with his wife and expected to be away 6 months. His brother PERCY LAMBERT now managed the Imperial factory in his absence.

His skating rink in Pingelly continued to show films at the premises and in April 1921 he took over the Empire Theatre in Albany. He built a new theatre in Albany in 1924 capable of seating over 1,000 people. In 1929 he was proprietor of the Regent Theatre and had a long lease of the Empire Theatre. In 1930 he purchased the Wagin picture theatre from Mr Cowell and installed up to date equipment.

He passed away after a lengthy illness on 8 Sept 1936 in Albany. His cordial, electric light interests and picture theatres and his time in Pingelly and Albany would be remembered by residents for his commitment to the enjoyment of country living. His wife Elizabeth Alicia nee Meyers died in January 1944 at her residence in Stirling Tce, Albany. She left 2 sons and 2 daughters.

He was born in Albany, the 3rd son of Lion Brewery owner James Meyers and wife Jane nee Baggs. He married Elizabeth Annie Withnell in 1903 and in 1915 lived in York St, Albany when he applied for a Publican Generals License as a hotel keeper of the York Hotel in Albany.

Samuel’s brother Arthur, in 1932 was involved with the Albany Aerated Water Company and when he died in Oct 1946 it is stated in his Obituary, he was principal of the Albany branch of GSR Mineral Water Co and was associated with Henry and Percy Lambert and J Genoni. I expect he helped Samuel in the early days of the Imperial Factory.

He was born in Albany in 1890. In 1907 he operated a fruit and vegie business in Beverley which he sold to P Webb in June. By 1909 he and partner Tom Lee were owners of a green grocery, confectionary, afternoon tea and coffee palace. The Beverley Coffee Palace sold ice cream and had specialties of oysters, crayfish, crabs etc.  He was also the towns agent for Edison phonographs. By Feb 1910 the partnership between Lee and Lambert was dissolved and PERCY LAMBERT took full control of this enterprise.

He was also involved with presenting picture shows once a week for the Beverley residents. However, now he concentrated on aerated waters.

The Beverley Times of 10 Aug 1912 gives an account of his STAR AERATED WATER FACTORY in the town. He imported a crown bottling & corking machine to enable him to make Dry Ginger Ale. This was amber in colour and he used carefully filtered water with a patent crown cork placed on the bottle. This consisted of a circular disc of corrugated tin with a backing of the best Spanish cork which is firmly clasped around the neck of the bottle (This Star brand was also used by George Saurmann in Fremantle in 1903, Walter Forman in Geraldton in 1913 and Heathcote & Bussola in Perth in 1923)

In 1914, PERCY LAMBERT married local girl Alda May Smith. She was the daughter of one of Beverley’s first storekeepers. His bestman, was LESLIE PHILIP SWAN ( later to become an aerated water manufacturer in his own right) who worked as an electrician.

Percy Lambert also built the Beverley electric light station, picture theatre and skating rink like his brother Henry Ernest Lambert and in 1917 he enlisted in WW1. He was away 2 years. His best man LESLIE SWAN had learnt film projection and cordial making & the lighting business during his apprenticeship to Lambert. Swan took over all these duties for Lamberts wife Alda while he was overseas. Percy returned home after convalescing in England from being gassed during the war in June 1919. He sold his Electric Light business in Beverley to Selby Ford and SWAN purchased the AW business and Percy now took over his brothers IMPERIAL AERATED WATER FACTORY in Albany.

PERCY LAMBERT was interested in civic affairs and was secretary of the Albany branch of the Licensed Victuallers association and president of the RSL. In Nov 1925 he had a stall at Albany show where he displayed Citric Acid, Sugar Cane, Crown Bottling seals, Pure Carbonic acid containers, corks etc plus items he stocked at the factory. He also held the bottling rights for the state of OT Ltd fruit products. These with the cordials of the well known brand, were also on view.

He became Mayor of Albany in 1924 and president of the Princess Royal Sailing club in 1926. He was also a partner with J C Quitmann trading as piano makers & dissolved their partnership in June 1928.

He died in Aug 1928 and his father took over control of the IMPERIAL FACTORY for Percy’s widow Alda.  In Jan 1929 she decided to move back to Beverley where they had spent so much of their life and she died shortly after in March at York. Percy and Alda son Frank Mervyn Byrne Lambert had the Wembley Theatre in Cambridge st, Wembley in 1938.

On 12 Dec 1929, J Genoni purchased PERCY LAMBERT’S A W Factory in Albany. His last ad for the company was on 8 Nov 1930 when he donated drinks to a Christmas Appeal.  In July 1935 J Wood purchased J Genoni’s business in Perth Road. He was a buyer of wool, sheepskins and other skins. 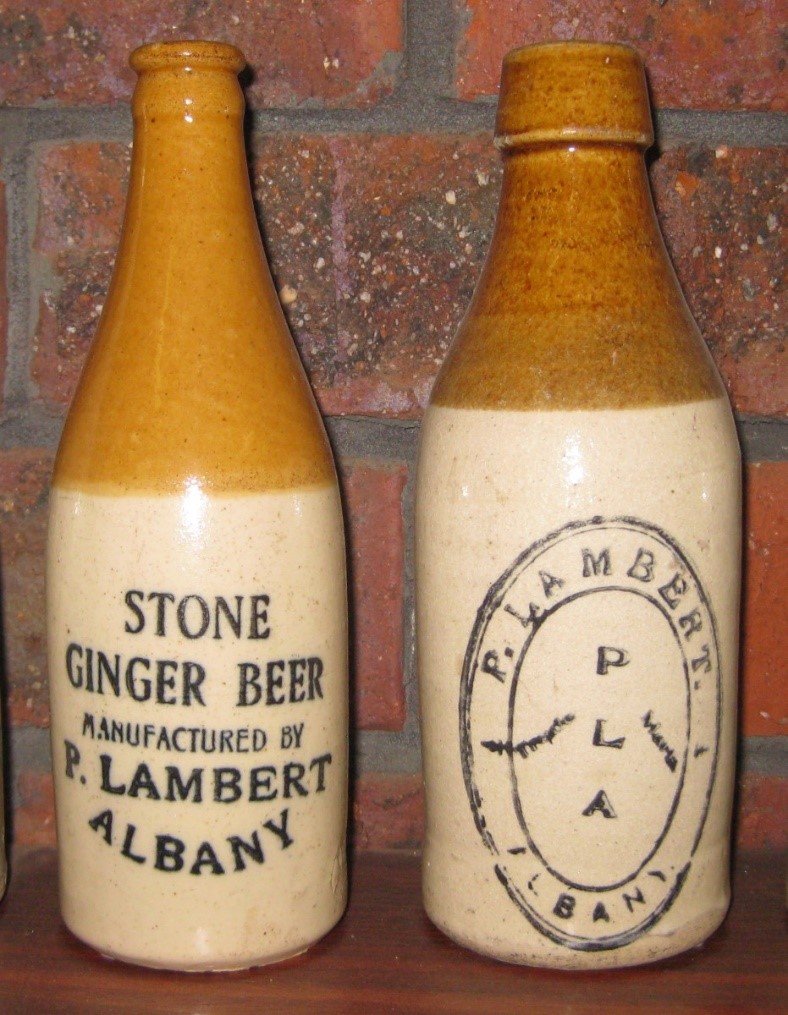 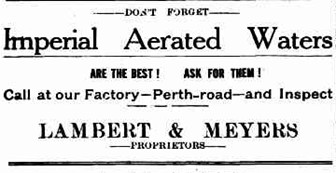 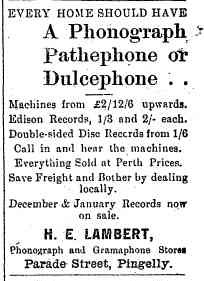 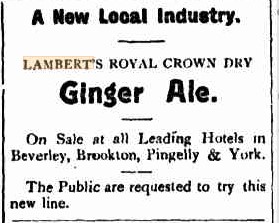 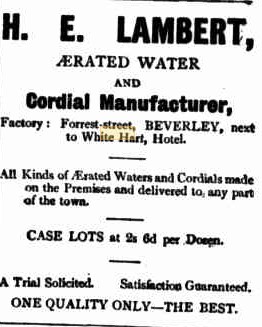 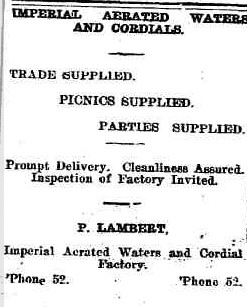