All bottle diggers travelling to Kalgoorlie in the years 1970-90’s spent many days digging the Lamington and Bouldertips & surrounding areas hoping to bring home the prized “Dempsey dog” ginger beer. This renowned champagne shaped green top bottle featured a dog’s face on its surface and would only be dug by a few collectors. Other collectors would pay hundreds & even thousands of dollars, in later years, to have the prized ceramic bottle on their shelves.

My husband and I travelled to the Adelaide National Bottle show in 1992 & on return called into the last organised dig at the Boulder tip where a “Dempsey dog” was uncovered. This bottle, worth about $1,000 dollars at the time was placed in a “draw” to be won by a lucky participant on the day. It was won by a local Kalgoorlie collector and the city diggers who had travelled far for this event, went home empty handed.

I have found it difficult to separate the careers of Joseph Dempsey and his son Joseph junior from the articles in the early newspapers.

Joseph Dempsey, senior, was born in Tamworth, NSW. He married Elizabeth Jackson in Bourke, NSW in 1888 and moved to WA around 1891. He was a bookmaker by trade but on arrival at Southern Cross with his wife and brothers, Charles & James Dempsey, their occupations are listed as dealers. Joseph later moved to Coolgardie before settling in Kalgoorlie about 1895/6.

He now formed an aerated water company with William Fairchild but the business was dissolved in March 1896 as Fairchild was moving to Menzies and later Black Range.

Dempsey then formed the Broken Hill Cordial factory and advertised that all his aerated waters would sell for 2 shillings a dozen from July 1st 1897. His brothers worked in the Brookman Street factory for sometime.

In December of that year he advertised the business for sale. It had all the latest machinery, a Hayward-Tyler aerated water machine, Dan Rylands turn over rack, also all essential oils, essences and bottles. He also had a block in Brookman street with homes which had tenants and a block of land at Bulong and the lease of a shop in Isabella Street, Kanowna used as a restaurant and cool drink shop, were also up for sale.

In 1898 he challenged local cordial makers I J K Cohn and F R Flindell to make soda water or any other aerated waters for 100 pound a side. They had to put the money up or shut up. Many cool drink companies started in Kalgoorlie around this time so I expect it was good competition for the aerated water industry.

The business advertised for sale 12 months ago, was again up for sale and he stated it could turn out 200/300 dozen aerated waters per hour and the bottling racks could turn out 90 dozen per hour. It also had a syphon rack and 700 dozen lemonade and soda bottles. Ginger beers were also mentioned as 700 dozen and it was to be auctioned by Pell & Company.

On 14 Nov 1899 Dempsey registered his trademark of a dog’s face in a triangle for his bottles & mineral waters & ginger beers. This trademark must have been connected to him at the Broken Hill factory, as I believe no bottles have been found with the name Broken Hill Cordial factory name embossed on the bottles.

Dempsey now turned his hand to the making of confectionary, vinegar and sauce alongside the cordial factory. He named the business, The Dogs Head Manufacturing Company and Frank Flindell was his manager. In June 1901 his pickled onions, Worcestershire and tomato sauce were his leading lines.

By Xmas 1902, Richard O’Donnell was the owner of the Broken Hill Cordial factory and Flindell was in Lane Street, making aerated waters and pickles alongside the old cordial factory. Dempsey had set Flindell up with machinery etc. Dempsey then pursued other interests.

In 1903 Joseph Dempsey senior took possession of the Goldfields Hotel and dissolved his partnership with John Church and Church now had the Exchange Hotel.

The Brookman street factory of the Broken Hill Cordial Company was sold at auction in May 1906. The 60”x 30” building was dismantled and all timber etc and casks of 10, 18 and 36’s were included in the sale. O’Donnell and Dempsey were named as owning this building.

Dempsey seniors wife Elizabeth, died in 1905 and he remarried in 1909 to Johanna  Carroll. She was 22 years old and they had 8 children.

On 21 Mar 1907, O’Donnell & Dempsey junior dissolved their partnership and the business at 529 Hannan Street was to be carried on by Joseph Dempsey junior.

Joseph senior now left the industry and he commenced cutting and carting wood. In 1913 his carting business operated from the West End Brewery in Hannan Street. Also, in 1913 the Dempsey factory in Hannan Street had a clearing sale where horses, carts, harness and plant including 50 hogs head, nearly new and 200 tons of firewood was up for sale.

Son Joseph was licensee of the Globe Hotel and also had the cordial business at 529 Hannan Street. He transferred this licence to James Willoughby in March 1915.

WW1 loomed in 1914 and Joseph Dempsey junior enlisted in Sept 1915 and gave his age as 34 years 9 months. He was divorced at this time and sold his half interest in the Globe Hotel, a lemonade factory and some racehorses to his fathers second wife Johanna Dempsey. James Dempsey had the other half share. He had owned the aerated water factory since 1907. Sadly, he lost his life in France in 1918 and left his estate to his daughter who had moved to NSW with her mother.

Johanna Dempsey is listed in Wises Post Office directories as being the proprietor of the J Dempsey factory at 529-531 Hannan Street until 1920.

Joseph Dempsey senior struggled after the loss of his eldest son and one day whilst carting wood a wheel of the cart went over his leg. He returned to work but then lost the use of his leg and died after a leg operation in Kalgoorlie in 1924. Before this time, he had also trained and leased racehorses.

Richard O’Donnell spent 30 years in the goldfields and on his 73rd birthday he is mentioned as a doyen of Commercial Travellers. He died at Fremantle in 1940.

The bottles produced by Dempsey senior and junior include a dump blob top grey glaze impressed ginger beer and of course the renowned “Dempsey dog” ginger beer. Also, marble bottles with his trade mark dogs face in a triangle and without the triangle and one with his initials J D in a triangle. Some bottles are made at Melbourne Glass Works, Cannington & Shaw at St Helens in England and Dan Rylands and FBH of Frederic Boulton Hughes in Adelaide.  Most collectors would have a variety of these marble bottles in their collections. 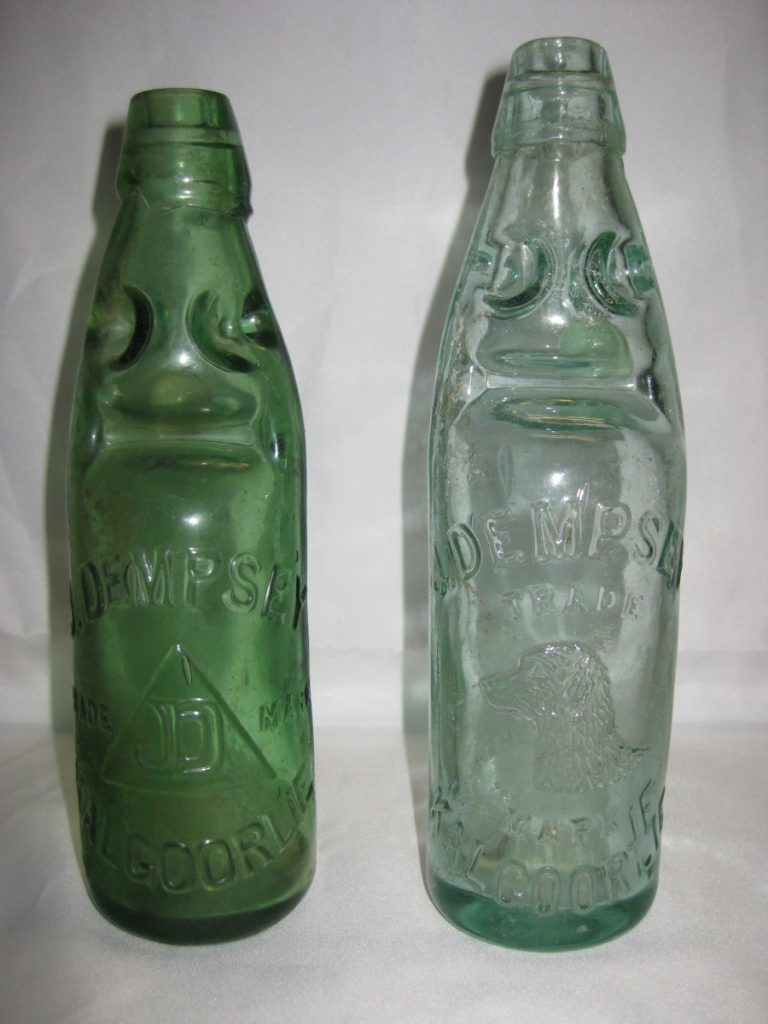 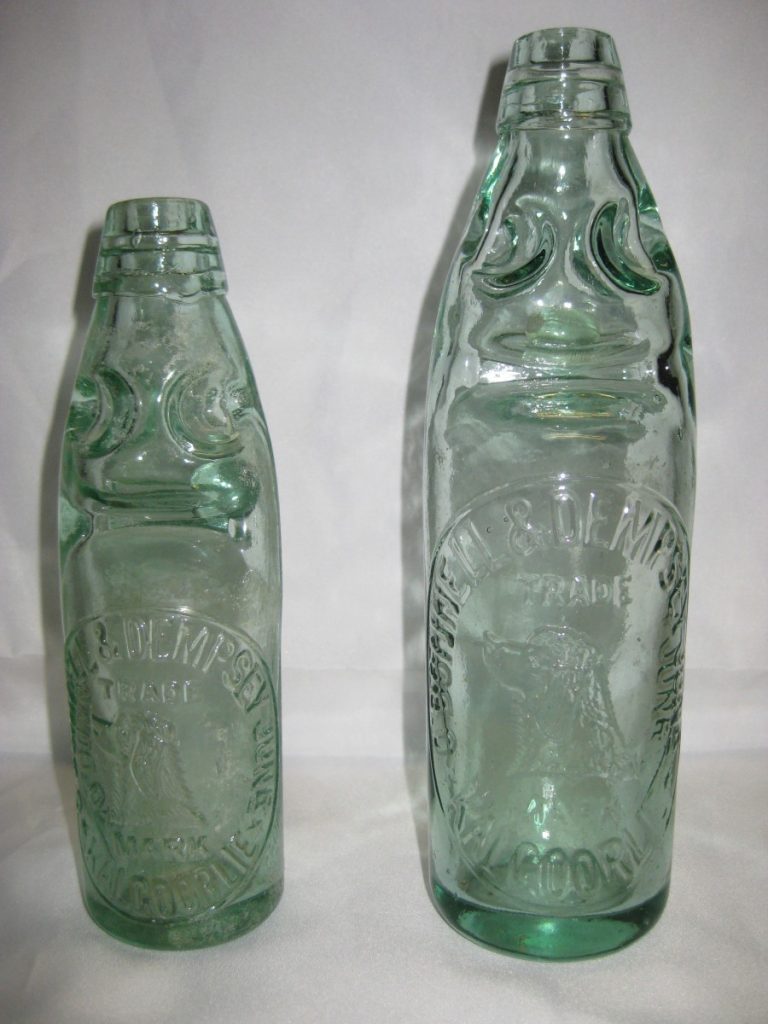 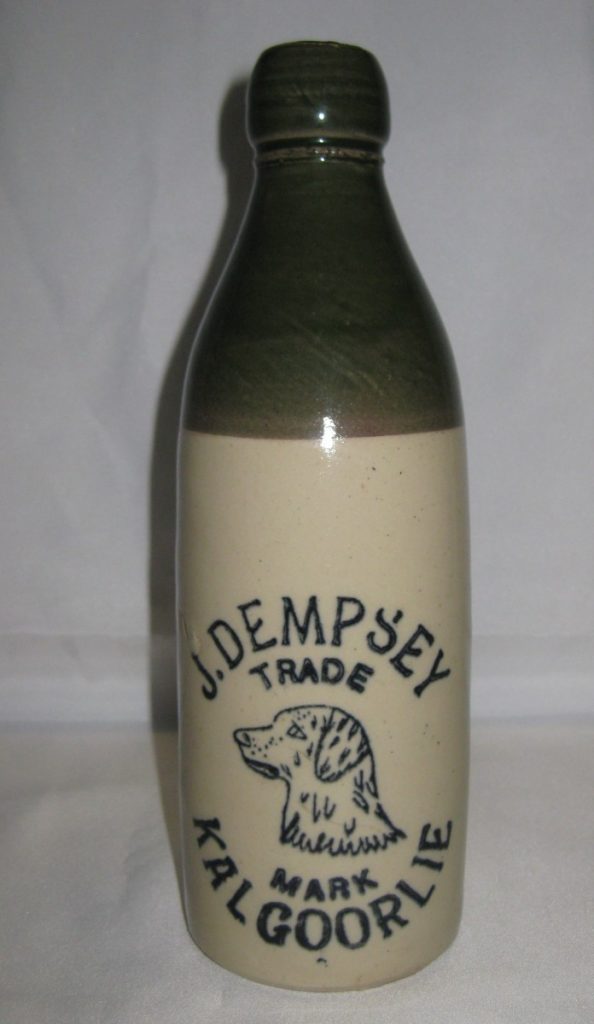