John McManaway was born in Roscommon, Ireland in 1863. He moved to Victoria, Australia and by the age of 21 years had married Mary Glover. They had 6 children and by 1895 the family had moved to Western Australia and lived in Howick St, Perth. Their eldest daughter Muriel died here aged 9 years in 1895 and is buried in East Perth cemetery.

A change of surroundings & lure of the Murchison Goldfields saw McManaway move to Cue where he purchased T. Harry Marshalls, Excelsior Hotel. Marshall had bought the hotel in November 1894 but had soon been declared bankrupt and in August 1895 advertised the business for sale. The hotel had a front & saloon bar, a billiard room dining room, 3 parlours, 12 bedrooms, bathrooms and also a large cellar. Stables were also attached to the property and a well was sunk at the rear of the premises for clear water for his Aerated Water factory which was in charge of Mr Solomon.

McManaway changed the name of the hotel to Roscommon in 1899, after his birthplace in Ireland.

In August 1900 he advertised Bunbury Beer on draught or bottles available to his customers. However, by September 1901 the Roscommon Hotel was advertised for purchase or under a 3 year sub lease. John had been there 5 years and the licence, all the stock, aerated water plant & equipment capable of producing 500 dozen bottles per day, horses, drays, stabling etc were available for 12 pound 10 shillings per week and tenders closed on 23 Oct. The business had struggled and McManaway found himself in the Bankruptcy Court where his land dealings in the south of the state came into question although bought in the name of his wife Mary McManaway.

In 1904 he was granted a liquor licence to build the Club Hotel at Nunngarra (Nungarra) with Harold Miller. Nunngarra was situated 12 km’s south of Sandstone and originally known as Black Range. The townsite was declared on 4 December 1903. However, by 1906 gold had dwindled & the residents moved to the new town of Sandstone.

McManaway was interested in town affairs and was Chairman of the Black Range racing club in March 1906. Town lots became available for purchase at Sandstone in October 1906 and he paid 500 pound for Lot 81.  Of the 20 Lots sold, his large block fetched the highest price.

He was also Chairman of the Black Range Progress Association and visitors were always welcome at his now Palace Hotel at Black Range where he had accommodation and a livery stable.

In September 1907 he moved to Sandstone and was busily furnishing his new Oroya-Palace Hotel built on Lot 81 in preparation for its grand opening on October 1st. He had a well sunk at the rear for fresh water & the premises had a large sample room where Commercial Travellers could display their wares. This was later used for roller skating. His first consignment of Hannan’s Beer left the Leonora railway Station by camel team in February 1908. It was all packed in large sacks and I expect the thirsty miners looked forward to this consignment at the height of summer.

Besides his large Oroya-Palace hotel in Hack Street the town had the Sandstone Hotel on the corner of Hack and Irvine streets run by Mrs Coffey & The National run by W A Richardson late of Bunbury. 19 miles from Black Range George Milling had the Maninga Marley Hotel, the 50 Mile or Birrigin Hotel had E J Buzza as proprietor. The Rangeview was 18 miles from Sandstone on the Mt Magnet road and William Keehner was the owner. Michael Quain had the Sandstone Aerated water factory in Griffiths Street at the rear of the National Hotel. In Payne Street, Sandstone, D Hay & Companies Black Range Bottling Company boasted a choice of cordials, aerated waters, bottled ale, stout, whisky, brandy, gin, schnapps and wines. The goldfields miners would not go thirsty whilst these companies were in existence.

McManaway’s business covered 4 blocks and the hotel had over 30 bedrooms.

By 1910 McManaway had been unwell & the family took a break from the harsh conditions in the goldfields & he left with his wife and daughter on the “Ophir”’ for a holiday back in Ireland & the Continent. They were away 6 months, returning in January 1911.

In October 1911, he advertised the Oroya-Palace Hotel for purchase or 5 year lease, however he remained in Sandstone. His wife declared bankruptcy as I believe the premises was in her name and on July 1 1915 all stock in trade, beer etc, furniture, tanks, aerated water plant, bottles, cases which had very little use, was for sale.

In September 1915 they moved to the Goldfields Club Hotel in Perth. He died here on 13 November 1915 aged 52 years and is buried in E Perth cemetery near his daughter.

In June 1917 & old gentleman, once manager of Hannan’s brewery gave an interview and stated the beer that went to McManaway’s Hotel at Sandstone in 1908 weighed 50 tons and was his largest order.

In July 1917 the final dividend was paid by Mary McManaway’s estate.

The Oroya-Palace Hotel finally closed its doors on 31 October 1920 and was demolished, rebuilt in a couple of towns as a store and finally ended its days on a station property at Yalgoo.

McManaway’s second daughter Annie had married Christopher Lowrie and lived in Northam where her mother Mary McManaway died in June 1925.

In 1938 a Sandstone identity stated McManaway was known as Bold McManaway because he feared nothing, once threw a clergyman out of the dining room because he let a dog enter the room. He never let anyone go thirsty or hungry and his bark was worse than his bite.

John and Mary McManaway were one of the many pioneers of the Goldfields who “had a go” in conditions that would daunt many people today. 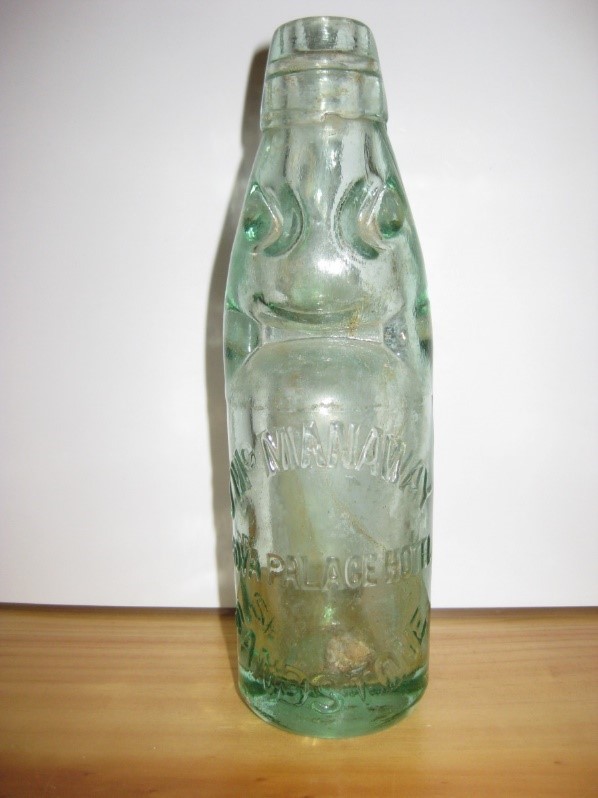 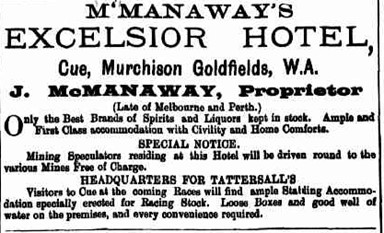 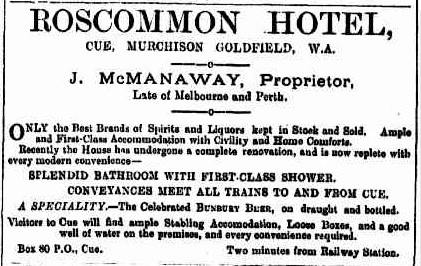 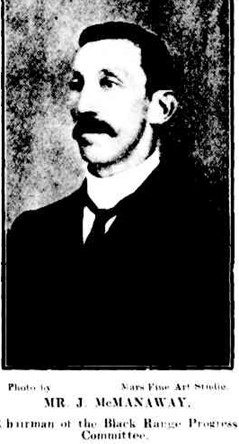 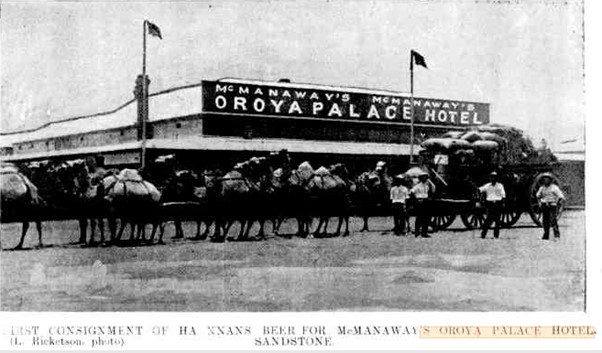