The Ivory Brothers Edward and Patrick, trading as Ivory Bros of Coolgardie arrived in W A in 1894. They conducted a Tobacconist and Hairdressers business on the corner of Bayley and Ford streets, whilst their brother John Ivory joined William Fairchild at the Golden West Aerated Water factory in Lindsay Street. The factory opened in time for the summer trade of November 1894, with the latest equipment and they ran their ads in the Coolgardie Miner newspaper from February 1895 until 30 April. Fairchild and Ivory also had the lease of the local theatre and after Fairchild retired from the business on May 3rd 1895, Ivory continued manufacturing aerated waters and conducted skating events at the theatre Royal and had brass bands there, to entertain the crowd.

Meanwhile by November 1895 a huge fire consumed over half the premises in Bayley Street, including the Ivory Bros tobacconist’s shop. All they could save were 4 chairs, some showcases, mirrors and 50 pounds worth of stock. Many proprietors lost everything and some were not insured. Edward and Patrick set up shop in the billiard room of the Club Hotel until the building was repaired and a slightly larger shop was once again open for business by late December.

1897 was a sad year for the Ivory family. Edwards wife Caroline and 4 week old son Edward, died at Coolgardie in February and are buried in the Coolgardie cemetery. Brother Patrick, had moved to Fremantle with his brother John. Patrick Ivory died on February 28th aged only 32 years and is buried in Fremantle Cemetery.

John and his wife Lavinia were now in Fremantle and his old home and premises in Coolgardie were now advertised as an Art Union Lottery prize to be drawn on June 16th 1897. It was on Town Lot 52 and valued at 2,500 pound.

John had been approached by hotelier Thomas O’Beirne to manage his Globe Aerated Water factory in Hill St, Fremantle in November 1897. O’Beirne had come out from Ireland and gone to Broken Hill and moved to WA at the height of the gold rush. He bought the Club Hotel in Fremantle and the Globe cool drink factory originally started by Ryan and Lester. John Ivory had not been a good choice of manager and Lavinia soon took over those duties but O’Beirne was not happy, especially when court case proceedings started regarding the ownership of a horse and lorry and fodder etc. The court ordered that Ivory and O’Beirne sell the stock in trade and O’Beirne had already taken steps in December 1898 to have John Ivory removed as manager of the business. The business including all plant and assets were then sold.

Ivory applied to have his Bankruptcy discharge approved in December 1899 and this was granted.

A new chapter emerged with John joining his brother Edward in Burt St, Boulder where they opened a tobacconist and hairdressers in March 1900. In May, John applied for a licence for the Castlemaine Bottling Works in Hamilton Street, Boulder. However, Edward and Johns tenure together did not last and by July they had a creditors meeting in the Bankruptcy Court. Hans P Lushke late of Ivory Bros old business in Coolgardie and taken over by Wach & Co, when Ivory Bros left Coolgardie, bought the Burt St, Boulder business.

Between 1901 and June 1910 there is a break in the records (his name was not found in the newspapers) and I believe that Lavinia and John separated. In June 1910, John Ivory was promoting billiard tournaments at the Duke of York Hotel in Narrogin. Nicholas Bushalla owned this hotel by Xmas 1910.

Mentioned in the Narrogin Observer 15 April 1911 is the name John Ivory who lost his life as a passenger on the Adelaide Steamship Company vessel Yongala which went down with all passengers and crew off Hichinbrook Island, Queensland on March 23rd, in a cyclone. Because he worked in Narrogin, I presume this must be the same John Ivory for his name to be mentioned in the Observer.

The Ivory Bros time in WA was not without heartache and hardship and John’s bottles are sort after by collectors. 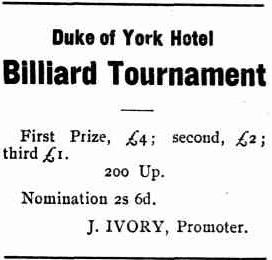 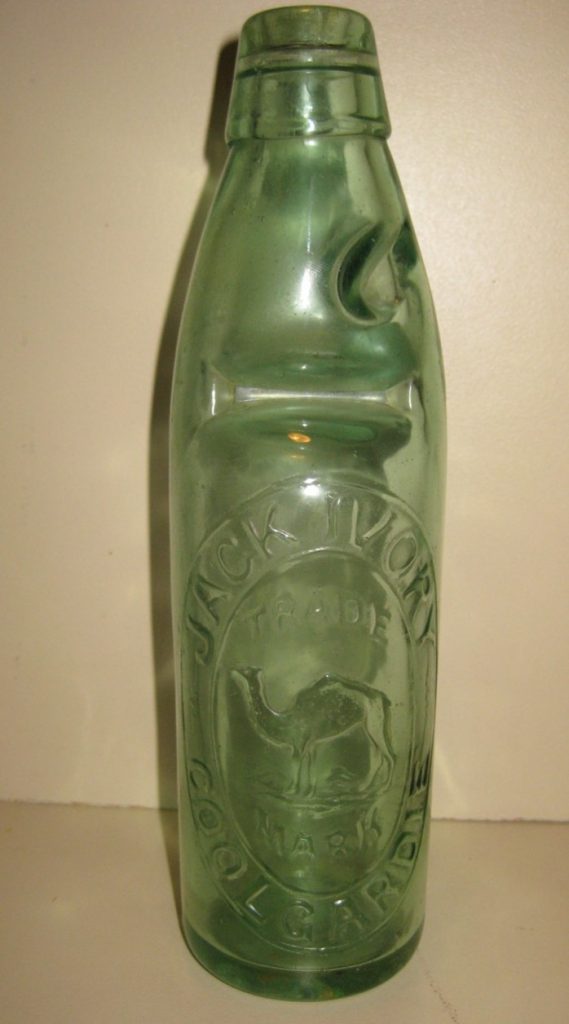