JOHN GEORGE THOMPSON was born in Fremantle in 1865. His father George Thompson was a partner in the firm Thompson & Sendey & Co. Ltd. They were situated in Muatt Street, Fremantle and Hay street in Perth. Their business interests comprised Estate and Land Agents, Auctioneers, Commission Agents and also Wine, Spirits and Beer Merchants. One line imported in 1883 was the Gin, JDKZ bottles packed in cases holding 15 bottles. These dark green bottles are found in dumps all over WA and most collectors have one on their shelves. John’s mother, Mary nee Flindell had a nephew FRANCIS RICHARD FLINDELL 1863 – 1915 who was an aerated water manufacturer in Fremantle, Southern Cross, Kalgoorlie and Perth.

In May 1877, John G Thompson was 22 years old and he set up business in Hapgood’s buildings in Fremantle as an agent for Mercantile Insurance Co. and was also producing cordials and aerated waters. By November the Fire Marine & Accident Indemnity Co of Melbourne appointed Thompson as their agent for WA. In the same month he applied for a gallon licence for his Essex Street premises. Nearly 12 months later in September 1888, a creditors meeting was called into the affairs of J G Thompson, Commission Agent. His cordial business in August 1889 was now advertised as being in Henry street, Fremantle when he applied for a gallon licence. He continued to be involved as a cordial maker and commission agent and rented premises on the corner of Essex St and Fitzgerald streets in Fremantle in June 1892, where both businesses were listed at the same address. The rented premises had belonged to the estate of the late Lucious Alexander Manning, a well respected local identity. He now also followed the lead of his father, and placed an ad that he would take particulars of all people interested in purchasing various blocks of land on the winding up of the estate of the late carrier and commission agent, Thomas Beecho of Fremantle. Thompson still lived on the corner of Essex Street in May 1894. He had a manager in his cordial business, ROBERT GEORGE MURRAY in October 1895. Murray left his employ by 1897 and moved to Coolgardie where he became involved in a court case with I J K Cohn who accused him of using his “Camel” registered marble bottles. Murray later managed the Mingenew Hotel in 1914.

Thompson now turned his attention to Perth where he applied for a Publican Generals licence for a house to be erected on the corner of Bay Street and Adelaide Terrace in August 1896. The building would have 9 sitting rooms, 37 bedrooms and was to be used as an inn or public house. By this time, he had held a gallon licence for the past seven years. He also owned some land in Gugeri Street, Claremont. This was leased to William Horton in 1896 and he would erect a building for the sale of liquors and it would have 4 sitting rooms and 14 bedrooms. Tenders were called to erect a 3 storied hotel on the corner of Bay st and Adelaide Terrace, Perth in January 1897. His land interests again took some of his time when the Hastings Estate at Cottesloe, fronting Fremantle/Perth Road was being established and he listed 17 lots for sale in March 1897. He was so busy with his other interests that his aerated water business fell into the hands of the liquidators.

Codd bottle maker DAN RYLANDS & others bought an action against Thompson & on 22 April 1897 the Sheriff placed his aerated water business up for auction. For sale was all the stock in trade & plant including preserves, vinegar, tomato sauce, sugar, pickles, hop bitters, mushroom catsup, herbs, spices, essences, acids, bottles, cases, corking & other machines, 50 registered crates, tanks, tubs, casks, copper, copper pan, stone bottles, barrels, taps, timber for box making, office furniture etc. W M KING and others also took action & the Sheriff would auction Thompsons household effects and furniture of his Norfolk street home. He had married MINNIE CLARA LUBON in Fremantle in 1894 and had a son born in 1897 so a great upheaval for his family. He now moved to South Tce, Fremantle and applied for a gallon licence for Hopes Buildings in November 1898 but this was refused by the court as the area already had many hotels nearby.

Thompson’s cousin, FRANCIS RICHARD FLINDELL was in Kalgoorlie so John moved his family there. In September 1899 he applied for a gallon licence for a building in Bayley street, Coolgardie but it was refused as he didn’t attend court. By March 1900 he was at 310 Dugan Street, Kalgoorlie and Flindell bought an action against him and the bailiff was instructed to sell a variety of items at these premises. He was still listed as a cordial maker in August but was now manager of the Beehive Manufacturing & Agency Company in Kalgoorlie. Soon after, the family left Kalgoorlie as his wife gave birth to another son in Fremantle in 1901. He was back at Essex Street, Fremantle in August 1904 but the past few years had taken its toll on his health, with the business losses, five children born but only 2 surviving and in 1907 he was admitted to Claremont Mental Asylum. He spent the next 14 years here and wrote many letters to the newspapers during his time here. His wife was granted a divorce and she remarried and on his release on 4 April 1921 he moved to Leederville. He returned to the aerated water trade and in 1926 he is listed in Wises Post Office Directories at 104 Richmond St, Leederville. In 1929 he placed an ad in the newspaper for a young boy to wash bottles and the Post Office Directory listings cease after 1930. He died on 24 April 1935 and is buried in Fremantle Cemetery. 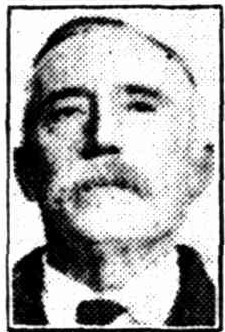 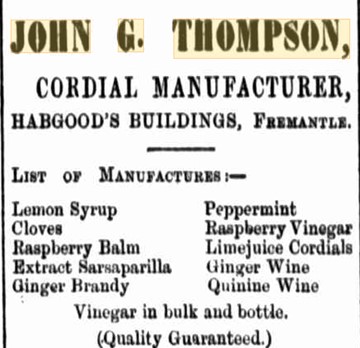