Henry George Lamont was born in Northern Ireland in 1867 and arrived in WA when he was 30 years old. He settled in Menzies with his brother where they traded under the name Lamont Bros, Blacksmith & Wheelwrights in 1898.

They still resided there in 1900 but by July, the business was listed for sale.

Henry moved to Leonora where he applied for a Spirit Merchants licence followed by a gallon licence application in 1902 for his store.

He married Carrie Baum of Coolgardie in this year but after only a few years in Leonora he advertised the store for sale, with all its stock comprising groceries, mens clothing, boots, shoes, ironmongery, produce, and wines and spirits. He left the town 6 months later where he had been a pioneer of the town, a Councillor, and mining speculator.

He moved to Buckland Hill in Mosman Park where in August 1907 he applied for a wine, beer and spirit licence for a property on Bay View Tce, comprising 1 acre where he wished to erect a public house, for premises belonging to William Tapson Cotton.  However, I believe this did not go ahead as the site was also under consideration by Otto Leimich, Norman William Faddy and Thomas George Molloy. Molloy’s application was accepted by the Licensing Court. In July he was the owner of a Drapery Store in Newcastle (Toodyay), formerly Newcastle Trading Company but by October he had left the business. He now set his sights on moving to Northampton in 1910.

He purchased the drapery store of Cass Bros opposite the Club Hotel in Geraldton. He had a large sale of the existing stock and at Northampton conducted an aerated water business.

A large fire destroyed the shed housing the plant and machinery in September 1915. Also, in the building, was furniture belonging to W H Glover of the Club Hotel. Everything was gone and the insurance only covered the shed and not the fittings and furniture. The name of the aerated water business is not given in the newspapers so I expect the company only used paper labels in the short time of its existence.

Lamont continued to live in Northampton and was licensee of the Railway refreshment rooms at the station in 1926 when he transferred the license to John Woodcock.

The following year tenders were called to purchase 4 brick shops adjoining Peter Hills Hotel at Leonora and to apply for particulars to H G Lamont, Northampton. Did he still own these shops or was he acting as an agent?

Sadly, he passed away in January 1937 aged 69yrs whilst on holiday with his wife aboard the RMS Oronsay. He was buried at sea between Adelaide and Melbourne. His large estate at Northampton and in Hill Street, Fremantle where the couple had recently moved was advertised for auction after his passing.

No bottles are known to exist for this country business at Northampton. 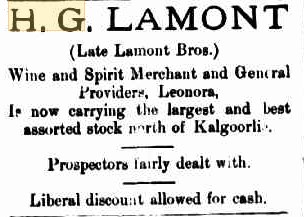 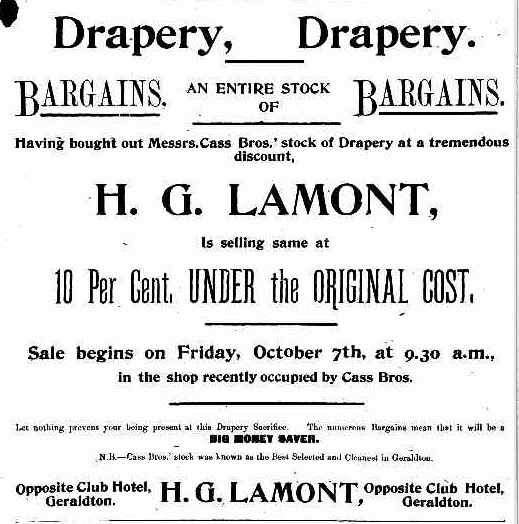 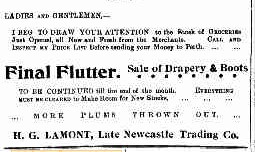 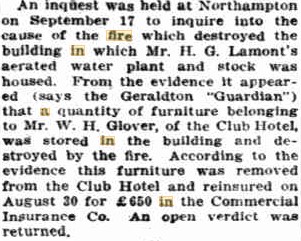