Geoffrey Paul Stocker was born in Salisbury, Rhodesia in 1899. He arrived in WA aboard the “Omrah” in 1915 aged 16 years.

He arrived in Port Hedland in 1922 and the Electoral Rolls list his occupation as “Station Hand”. He was a labourer in 1925 and then he married Myrtle Grace Ellery in 1926. He took over the towns aerated water factory in 1927, formerly owned by Albert Ernest Clark.

He joined the local Roads Board and was made a Justice of the Peace in 1936 and continued in the aerated water trade until 1938. In February 1938 he became a store keeper and installed a 4-door cabinet with a special ice maker to produce 35lb of ice per freezing. In December his store on the Esplanade stocked Ladies and Gents drapery, shoes, hardware, firearms, radios, books, confectionary and fancy goods.

He applied for a gallon licence for his building on Lot 1, Anderson Street, Port Hedland known as “Stockers Store” in July 1942. It was a large building made of cement bricks with an iron roof and it was approximately 40’ x 30’.

He enlisted as a member of the Home Guard volunteer services in WW2 in 1942, whilst living in Port Hedland.

In 1943 his wife lived in Cottesloe for sometime and Stocker passed away suddenly at Port Hedland on 29 Aug 1946 aged 47 years. His wife died on 2 Jan 1983 and they are both buried in Port Hedland Cemetery. 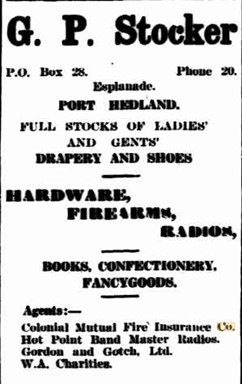