George Frank Chambers was born in Hull, Yorkshire, England in 1890 and an only child.  By coincidence when he was born, he lived in Walton Street which was the name of the street he eventually settled into at Corrigin. In 1911 at the age of 20 years he was an apprentice furniture maker. He arrived in WA between 1911 – 1913. He worked as a letter carrier in Boulder in May 1914 and married Ethel Shepherd in Perth in 1916. He transferred to the stores branch Postal Department as a storeman and was at Norseman in June 1917 working for the Department. His next position was at Kalgoorlie and by 1923 was situated in Corrigin as the Postmaster.

Chambers resigned from the Postal Service and bought J F Lindsay’s Fancy Goods business and commenced operating on 14 September 1925.  In April 1926 he began making aerated waters in the town under the name CORRIGIN CORDIAL FACTORY. His cordials were sold for 7/6 per dozen for quart bottles and they could also be bought by the glass full at his shop. He delivered to all areas within a 20 mile radius, for free and also listed his services as a confectioner and fruiterer. His Dry Ginger Ale sold for 4/- per dozen and Soda Water 2/6 per dozen. His Fancy Goods, Confectionary, Fruiterer business was situated in Walton Street, Corrigin.

On 8 May 1928 he was ordered by West Australian Glass Manufacturers Ltd from purchasing, collecting, holding any of its Barrel Trade mark bottles and to return same to its agent, Collins & Co of Palmerston Street, Perth. Chambers incurred a fine of 5 Pound with costs. In October 1932 his SHAMROCK BRAND Soda Water and Lemonade won 1st prize at the Royal Show in Perth and his Dry Ginger Ale gained 1st and 2nd prizes. His store in Walton Street still advertised his services as fruiterer, confectioner, tobacconist, stationer, fancy goods importer and Shamrock Cordials in 1939. He was also an agent for Gordon and Gotch publications and sold the Daily News. He still lived in Corrigin in 1944 but the Universal Business Directory of 1954 named Evans and Son as owners of the local newsagents, fancy goods etc store. 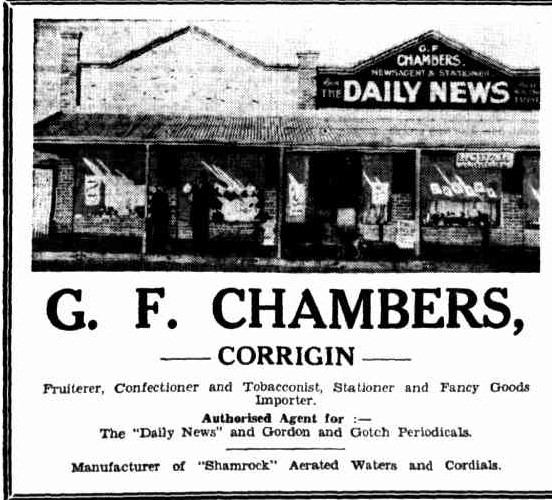