Geoffrey Alexander Wyndham was born in Perth in 1900. He lived in Guildford and Highgate in his early years and his father Geoffrey Wyndham had a store in Port Hedland in 1916, when he enlisted in WW1. G A Wyndham studied to become and accountant and was the auditor for Bassendean Road Board Elections in 1923.

Wyndham met local girl Lucy Hedditch of Beadon and they married on her parent’s property in November 1929. He had moved to Port Hedland and continued in his roll of accountant and the partnership between Wyndham & Lillycrapp of Port Hedland, Grocer, General Storekeeper, Forwarding and Shipping & Commission Agents was dissolved on 30 April 1932 and Wyndham would continue in the business and John Lillycrapp would pursue other interests. Wyndham’s father continued to live in the north and in 1936 was on Anna Plains station. In December 1938, G A Wyndham was still a General Storekeeper in the town and by 1942 had also added the lucrative trade of Kangaroo Skins to his business. His business on Wedge Street, known as Block 19 was moved to Lot 12, Wedge st in 1945.

In December 1951 he was one of the many West Australian aerated water manufacturers who used the bottles belonging to WAGM and bearing the inscription P&F Bottle exchange and his manager G E Bowden placed an ad in the newspapers to state the business would return said bottles and the companies bottles would not be used again.

In 1954 he and wife Lucy returned to the city and lived in North Perth. However, he gained employment in Bruce Rock as an accountant in 1958 where they both lived and he passed away here in 1960. Lucy was in Victoria Park in 1963 and died in 1985.

I expect any bottles used by Wyndham would have had paper labels. 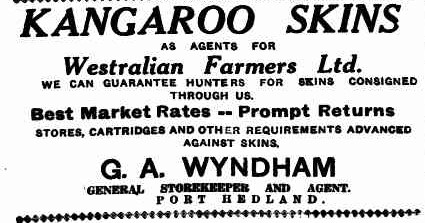