Leopold Arthur von Bibra went to the North West in the late 1880’s and was situated at Shark Bay in the 1890’s. He was the son of an early pioneer of the Macquarie area of NSW and Tasmania, but had ventured west to make his fortune.

He had interests in the pearling industry and had a cutter called the Helena in partnership with John O’Grady and Francis Lewis von Bibra. This partnership was dissolved in 1890.

He married, Elizabeth Frances Courthope the daughter of the auditor general in Perth in 1891 and the couple settled in Shark Bay. Over the years he journeyed south by boat many times and was made a Justice of the Peace whilst at Shark Bay for the Gascoyne Magistrates District in 1900.

In October 1905 William Herbert Fenner, the proprietor of the Port Hotel, Carnarvon, decided to transfer his licence and build an aerated water and cordial & bottling works in the town of Carnarvon. He called the premises the Gascoyne Mineral Springs and Aerated Water factory and its trademark was the Bustard or more commonly known, the bush turkey. In just 2 months after setting up the factory he sold to his friend Leopold von Bibra and he promised to keep making the drinks that Fenner had produced. In the meantime, von Bibra’s business interest with Fenner in Mardathuna Station near Carnarvon was dissolved.

The aerated water factory was renovated and in July 1906 von Bibra added a 40’x 25’ section. Many townspeople came to the opening of the new premises in Cleaver Street which was opened by the Mayor, Mr Baston. Baston started the machinery and bottled a few bottles of soda water and praised the erection of the new building and lauded its presence in the growing town of Carnarvon. Charles Alexander Lindau was to be the manager.

The business advertised regularly in the Northern Times and in 1907 bottles were in short supply and they were sourced from overseas. The drinks were transported along the coast by boat and a snake was found amongst one delivery to Port Hedland.

L A von Bibra was also elected Mayor of Carnarvon which he held in the year 1913 but by June 1914 Lindau had moved from Carnarvon and von Bibra leased the premises to Starr and Mackey for a few months. He had health problems at the time and died at Carnarvon in August 1915. His wife died in Perth in 1928.

Have any collectors seen any bottles featuring a bush turkey as its trade mark or did his bottles all have paper labels? The company traded for at least 8 years so somewhere in the northwest must be bottles from this company. 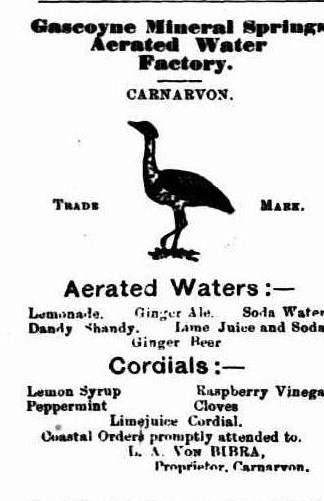