Day Dawn is situated in the shire of Cue in the Murchison district. It’s approximately 6.5 ks from Cue and it’s here that Ted Hefferman pegged a site which became the Great Fingall mine. The town of Day Dawn was gazetted on 25 May 1894.

Many men travelled from the Eastern States to the area including Walter Thomas Forman. He was born about 1870 and joined with Marshall to form Marshall and Forman bicycle makers in Austin Street, Cue in 1895. They were makers of the popular “Cue” bicycle and in 1903 the company claimed to make a bicycle in 3 days and they had made 550 to date. Forman was also secretary of the local cycle club. This form of transport was sometimes the only way of moving around the rough roads in the Goldfields and he advertised competitions including the Island to Lennonville road race.

In Sept 1896 he obtained his engine driver’s certificate.

In the meantime, George Bone had arrived from South Australia in 1900. His father was William Bone a brewer at West End in S Australia and George joined the company there as a clerk in Mr Simms office. Mr Simms required someone to look after his interests in Phillipsons Cue Brewing Company in Cue WA. This company was registered in S A and George moved west to take up his new position. As he had worked at West End, his knowledge of the industry helped in his position as manager for the Cue Company.

Forman and Bone had keen interests in the sporting field so as their friendship prospered, they joined together to form Forman and Bone Aerated Water Company in Day Dawn in 1903. Bone was still manager of the Cue Brewery at the time and the brewery produced “Phillipson’s” Red Hoop brand beer and stout and bottled ale.

Forman continued his involvement with bicycles until 1908 but the brewing company managed by George Bone suffered difficult times around August 1910 when a winding up order was brought against the company. The registered office at 419 Austin St, Cue for the brewery was still listed in May 1911 but Bone left soon after for the city.

In May 1912 with Bone’s retirement from Forman and Bone Cordial Company at Day Dawn, Walter Forman moved to Geraldton. He took over Shepheard’s former Star Aerated water factory. It had up to date machinery, used 1st class waters and produced Brighton Dry Ginger Ale.

In 1914 he advertised that all aerated waters were made from rain or condensed water so quality could be assured.

He was 46 years old in 1916 and married Mrs Annie Elizabeth Corrigan. She had 2 daughters, so he now became a family man.

His wife conducted the Bon Ton tearooms next to the post office. She advertised apples for sale from the premises in 1918.

In April 1918 Forman decided to apply for tenders to demolish the Day Dawn aerated water factory and re erect it in Geraldton. His new factory in Eleanor Street, Geraldton in September of that year, specialised in Bon Ton tonic brewed from selected yearling hops. Bon Ton stood for good manners or style.

Sadly, Forman’s health deteriorated and he died at only 50 years of age in March 1920. He was highly esteemed in the town and his wife decided to keep the business open. She sold her tearooms now called Kia-Ora in Marine Terrace opposite the club Hotel. It all came to a close in September 1921 when Mrs Forman advertised her husbands Aerated Water factory for sale WIWO.

George Bone in business in the city as manager of the Castlemaine Brewery in East Fremantle decided to return to SA in February 1919. He took up the position as manager of the Walkerville Brewery after nearly 20 years in WA. In 1922 his wife Rebecca met with a tragic accident when she lit her gas stove and her clothing caught alight and she died as a result of her injuries.

Forman and Bone had numerous marble bottles including 2 and 4 tears, F B as a monogram, Lemonade on the rear of a marble bottle and all with the town named Day Dawn.

Walter Forman had a Rylands Geraldton bottle with 4 tears and 225mms high. 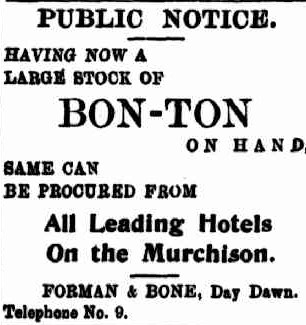 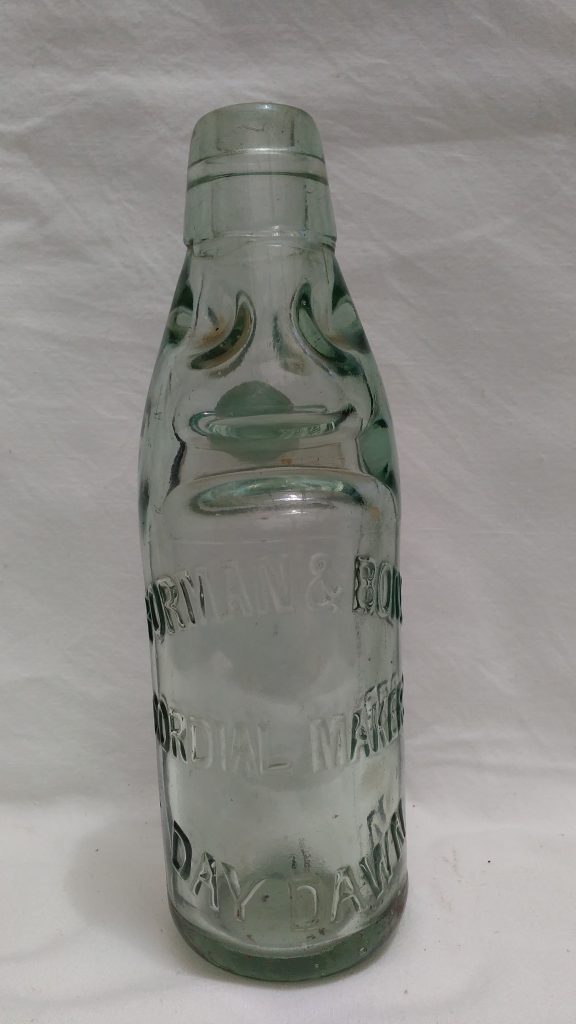