Edwin Duesbury was born near Sheffield, Yorkshire, England in 1858 to Samuel Duesbury and wife Esther Pryse. The family arrived in Australia in October 1865 when Edwin was seven years old. He married Eliza Loutit in Sydney in 1882.

He came to Western Australia and in December 1896 had gained work as manager for Faiz and Tagh Mahomet in Cue. They had a large business using Camels to transport goods in the Murchison. He held this position until the late 90’s and then went to Lawlers. In December 1899 whilst here, he advertised 2 Deerhound pups for sale. (These dogs would have been quite a novelty to be found in the Goldfields). He occupied the position as a storeman on the Great Eastern Mine and then moved with his wife to Sandstone in 1912.

Michael Quain of the SANDSTONE AERATED WATER WORKS & CORDIAL FACTORY listed his Griffith Street factory for sale in February 1912. It had a Gallon Licence and the factory also bottled beer as well as his choice cool drinks. The last advertisement, that appeared in the papers for the business under M Quain’s name, was on 1 August 1912.

In June 1914 Duesbury purchased the aerated water plant from D Hay, of the National Hotel. He could now supply cordials in greater quantity to the residents in the area. His last ad appeared in January 1915 and then he returned to Cue after being away nearly twenty years.

He moved back to the Eastern States and died after an operation, in Sydney on Xmas Day 1919. His wife Eliza married A G Clifton in Sydney in 1928. She had met Mr Clifton some years before when he had been a Mining Warden and Resident Magistrate in the Murchison and also at Phillips River (Ravensthorpe). 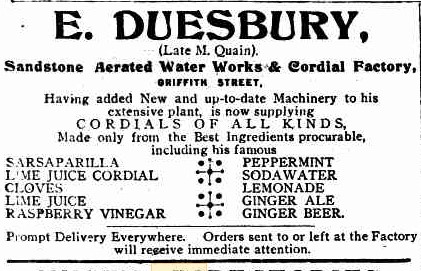