Edward Reeder Atkinson was born in Coolgardie on 12 October 1899 to John Frederick Atkinson and his wife Florence. He spent his early years as a miner in Kalgoorlie.

In 1922 he married Perth girl Katherine Jenkins & the couple settled in Boulder, where he was a miner. After the birth of their son Edward late in 1922, Katherine became ill & passed away in Perth in November 1923 at the home of her parents in Monger Street. She was only 19 years old. Edward R Atkinson then left Boulder and eventually remarried. He and wife Margaret were at 69 Fairway, Nedlands by 1930 & he gives his occupation as Aerated Water Manufacturer. By 1933 the Aerated Water business was situated at 147 Colin Street, West Perth, the previous occupier of the building being Les Price, Duco Specialist. This address is north of Wellington Street near Prowse Street. He and Margaret lived in Raglan St North Perth in 1936, so in close proximity to the business.  His first ad appears in the newspapers in September 1936. He continues to produce cool drinks in Colin Street till 8th June 1937 when he sold the business to Alfred Gillham. Gillham & Company is here using the premises as a warehouse in 1943 and then the Fresh Fruit Drink Company used this building in the early 1950’s. Atkinsons business at Colin Street only lasted 4 years making the crown seal bottle very collectable. His 26oz clear glass C/S bottle is made in Adelaide by Australian Glass Manufacturers and the emblem is a large circle with ATK in bold print inside the circle & his name “Atkinsons” is printed on top of the circle. In the 1950’s he becomes a clerk before retiring & settling in Mandurah during the 1960’s. He passed away in 1992 in his 93rd year and is buried in the Old Mandurah cemetery.

The only Atkinson bottle I have seen is the clear glass 26oz crown seal. 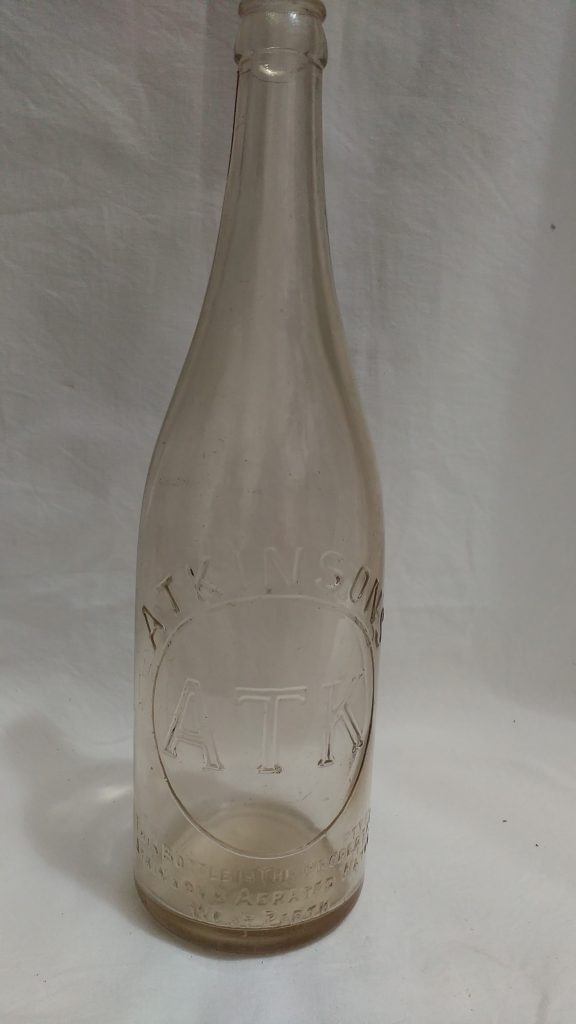 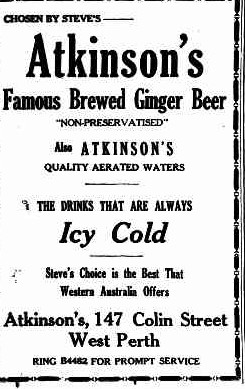