Francis Henderson – He arrived from London in 1885 and became an agent for Francis Richard Flindell in Fremantle, between 1885-1889. Flindell, was a cordial manufacturer and in the mid 90’s transferred to the Goldfields. In 1891 Henderson was an agent for the Stanley Brewery selling their bottles in Fremantle. At this time his address for the Premier Bottling Works is given as Bay St, Fremantle. By 1896 Henderson had become a man of some means and lived at 50 Ord St. Fremantle, whilst carrying on a business as a Bottler at Quarry St. In 1900 his business was called the Premier Bottling Works. I believe this name was retained until he leased the premises in 1913 for a 5 year term to William Charles Edwards trading as Collins & Edwards, Dux Aerated Water Manufacturers.  The “Dux” name originated because Hedgeland, I believe excelled at school and of course that is “top of the class or school” so Hedgeland would be connected to the firm to participate in this change of name.  The emblem on the bottles was a spinning top. In 1915 additions were made to the factory and then the Dux inscription may have been placed on the front of the building facing Quarry Street. Henderson continued as a merchant until about 1925. He sold a large parcel of land in Brittania st, Leederville, facing Mongers Lake in 1924, before he left for the Eastern States. He had purchased this property about 1897. He died in NSW in 1940.

William Charles Edwards – He was born in 1889 & took over the lease in 1913. (Collins & Edwards). In Aug 1916 Edwards dissolved his partnership with Percy Hedgeland as aerated water and cordial manufacturers and wine and spirits merchants at Quarry Street. Edwards mother, Frederica (a widow) lived at 99 Palmerston St. Perth in 1917 & this address was a common link between Joseph Collins & Hedgeland. Edwards enlisted in WW1 & left Albany on the Port Darwin in May 1918 & transferred the lease to his partner Joseph Collins. After the war ended Edwards moved to Cottesloe & Claremont & was an excellent musician & organist in the Tyrian & Rostrevor Lodge Assoc. & I believe he arrived in WA with Percy Hedgeland.  Hedgeland & Edwards remained friends for over 60 years.  Edwards died in 1972.

Joseph Collins – Henderson transferred the lease to Collins in 1918 for a term of 5 years. Collins was born about 1860 & was connected to Donaldson & Collins where he was a secretary/manager at various times between 1902-13. He was a cordial manufacturer at Quarry St. by 1915 & continued to be at 99 Palmerston St. Perth & was an agent for the Perth & Fremantle Bottle Exchange of 73-81 Palmerston St.

Percival James Hedgeland – He was born in Prahran Victoria in 1883. In 1909 he was a fruiterer in Brighton, Victoria but by the Electoral Rolls of 1916 he had settled in Fremantle and was a cordial maker and resigned as a partner with Edwards in the Dux business in Quarry street on 31 Aug 1916.

He also lived in Palmerston, St Perth in 1917 and is listed as a clerk but later in the year he married Lilian Nicholas at Fremantle and moved in with his wife’s family in Tuckfield St, Fremantle and returned to his former occupation as cordial manufacturer.  His friend W C Edwards was also living in Tuckfield st, Fremantle in 1917.The lease transferred by Henderson to Hedgeland in 1925, however there is no mention of what happened to the running of the factory after the untimely death of Collins in 1918, but as Hedgeland had been there since 1914, it is presumed he made the aerated waters.

Around March 1930 the company was in difficulties so a new company was formed in July, with capitol of 5,000 pound in 1 pound shares to acquire the business and premises of Percy Hedgeland under the name of Dux Cordial Factory. The new directors were Percy James Hedgeland, Wilfred Campion and Ernest Cuthbertson.  Campion applied for a gallon licence for their other premises at 387 Hay street in Subiaco in 1932 so that their spirits and wines could be sold from there, but the licence was refused. They were sole agents for Teacher Highland Whiskey. In Nov 1933 tenders were invited to purchase the plant and premises of Percy Hedgeland Ltd in liquidation. Hedgeland then proceeded to purchase the premises under his stage name of Percy Hill in July 1934. In 1939 Henderson transferred the lease to Dux Ltd & after Henderson’s death in 1940 the Trustee Executor transferred it to Dux Pty Ltd in 1953.

In May 1941 the business was for sale. Higham and company advertised the brick, stone and iron building in Quarry street, used for a number of years as Dux aerated water factory. By Nov 1943, J H Harridge, aerated water manufacturer of North Fremantle had taken over the bottles, cases etc of Dux, Percy Hill and Harridges company would use and reuse these items in his business.

Percy Hedgeland lived in Canning Highway, East Fremantle from the mid 1930’s until he retired to Mt. Henry & died in 1967. He was a member of the East Fremantle Bowling Club, appeared in Gilbert & Sullivan plays, concerts, conducted money raising functions for the war effort in Fremantle & had the stage name of Percy Hill. This name is featured on his 6oz clear c/s bottle with Dux in a circle & impressed with “the property of the Percy Hill mineral water company, P J Hedgeland proprietor Fremantle”.  He also had a clear 6oz c/s with a spinning top, Dux trademark & a clear 26oz c/s bottle with a large D for Dux on the base & Dux in a circle on the shoulder of the bottle. His amber c/s 10 oz bottle has a WAGM stamp on the base which is circa 1924. The c/s Ginger Beer is two tone with brown top and cream & was made by Mauri Bros. & Thompson of Sydney with the spinning top emblem. There may have been other bottles but these are the ones I have in my collection. Home units occupy the Quarry St. site today, but the Dux factory name can still be seen on one of the buildings. His late daughter, Marion Kidd wrote a small story for the club magazine years ago and she was the mother in law of my cousin. Dux bottles are sort after by bottle collectors of Western Australia. 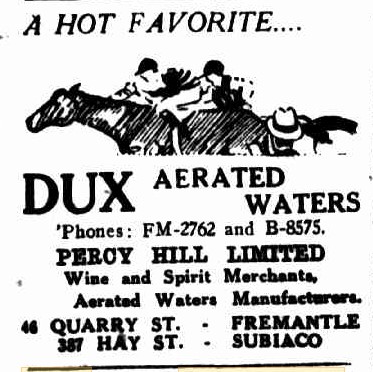 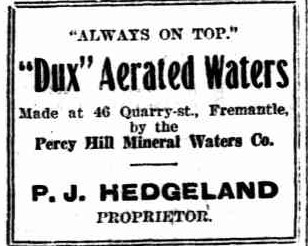 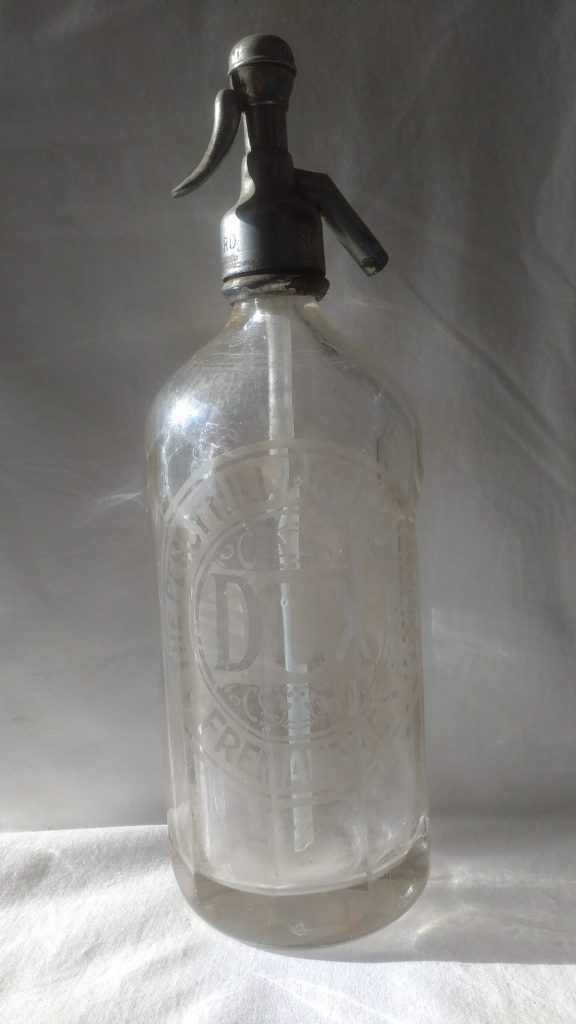 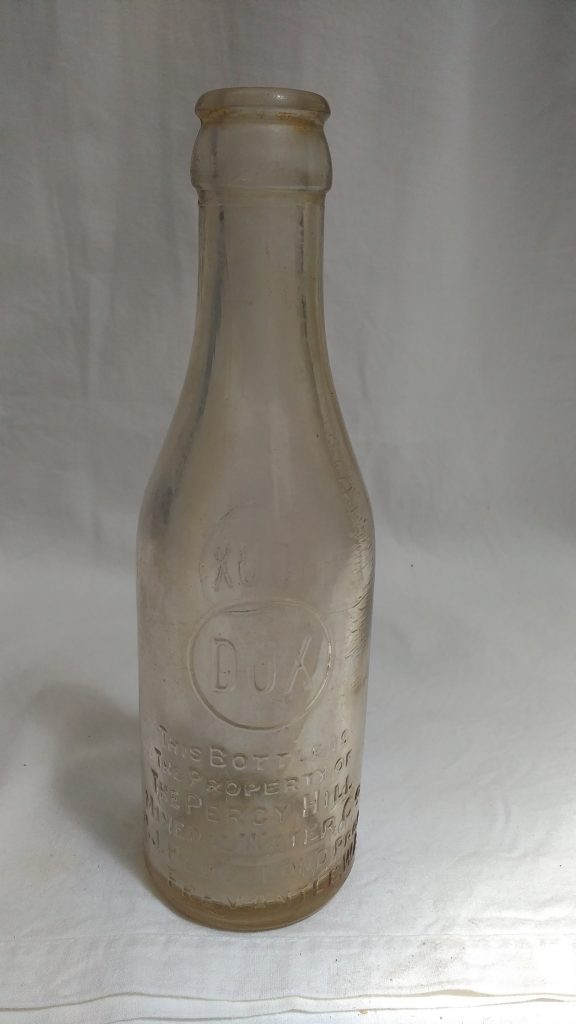 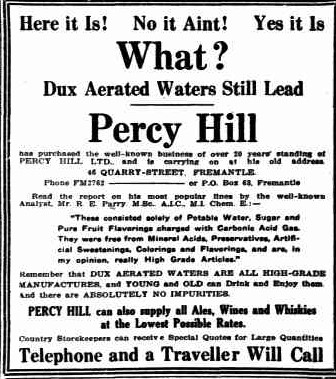 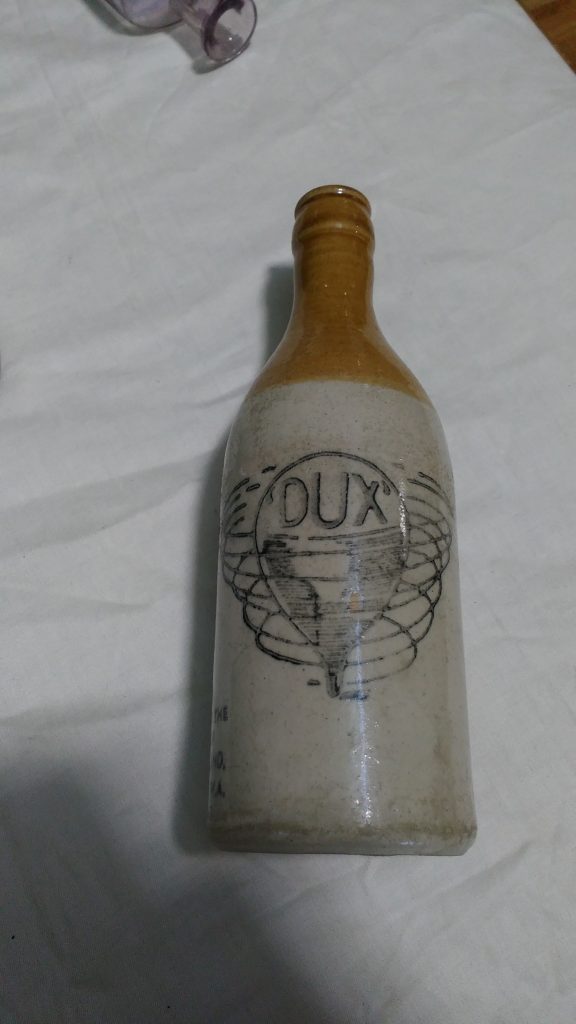