PERCIVAL STAR DAY was born in 1872 in Axbridge, Somerset, England. He was the 6th child of 10 children to John and Ann Day. By the 1881 Census, Percy was 9 years old and the family had moved to Shrivenham, Berkshire where his father John owned a 234 acre farm.

In April 1898 Percival Day is found in Boulder aged 26 years. By this time, he was producing aerated waters in Richardson Street with J BACKMAN.  Joseph Dempsey may have been the original owner. The company was called the Federal Aerated Water & Cordial Manufactory and by August, BACKMAN had retired from the partnership and JOSEPH BRADLEY KENNEDY joined Day in this enterprise after leaving his employment of Mohr Bros, hoteliers. Kennedy was given a gold locket for his services to the brother’s company.

Twelve months later the first Boulder gala sports day and fete was held and Day & Kennedy and rival company, Pivot Cordial Company made a special display of their wares.

In October 1899 a large fire engulfed many buildings in Richardson Street including a Saddlery shop, Estate Agents and the old cordial factory. Luckily, Day and Kennedy had recently moved to Burt Street but Mrs E Bennett who was preparing to open her doors on the Monday lost all her aerated water machinery and she wasn’t insured.

In February 1900 Joseph Kennedy married Emmeline O’Meagher at Kalgoorlie and the following month Percy Day married her sister Josephine, at St Georges Cathedral in Perth. Josephine had been a teacher’s aide at Menzies school.

The union of DAY & KENNEDY aerated waters was over by 30 April 1900. The business would now be carried on by Percival Day, Andrew Leahy and John Sutherland Mackay, but the company would still use the name of Day & Kennedy.

John Sutherland Mackay had married Louise Werner in Perth in 1899 so was also newly married and he was a publican. He applied for a license in May that year for the Junction Hotel on Bulong Road and in June 1899 he transferred the Burbanks hotel licence to H Regan. By February 1900 he had the license for the Locomotive Wine & Beer Saloon in Wittenoom Street until May.

On the 15th June 1900, DAY, LEAHY AND J S MACKAY applied for the Trademark D K in a circle & under the name, Day & Kennedy in respect of Mineral & aerated waters in glass bottles.

In August 1900 aerated water factories were being erected throughout the Goldfields so a meeting of manufacturers was held at the Eclipse Factory office to form an association called Kalgoorlie & Boulder Aerated Water Manufacturers Association. A Committee was formed of Messrs Mackay (Day & Kennedy), Flakelar & Dempsey and K O’Donnell was Chairman. They made a resolution to only use bottles of their own company trade mark and keep prices the same & pay a fixed rate to marine dealers who collected their bottles.

Joseph Kennedy had now moved on to hold the license of the Court Hotel in Burt Street, Boulder.

In March 1901 ANDREW LEAHY left the business and JOHN SUTHERLAND MACKAY resigned to continue on with his hotel interests in January 1902. He continued in this trade and had the Tasmanian Hotel at Lakeside until it was burnt down by fire in December 1903.

Day continued on making aerated waters and JOHN MANUEL GYNN joined him around 1903. Gynn had arrived in Boulder around 1902. He was born about 1879 in Victoria and had been involved in the Fire Insurance business. His brother Alfred was already a railway employee here in the 1890’s and died at Fremantle in 1897.

Day & Gynn advertised for an aerated water manufacturer for a factory at Laverton in July 1904.

The partnership of DAY & GYNN was dissolved on May 1st 1906 and Gynn carried on the business in his own name until September 1918 when he put the business up for auction. It included a sulky, lorries, horses, harness, machinery, bottles, chemicals etc.

John Manuel Gynn also entered the hotel business and had the license for the Shamrock Hotel and the Halfway House Hotel at Kalgoorlie and transferred the license to Francis O’Connell in November 1921.

JOSEPH BRADLEY KENNEDY of Pier St, Perth, applied for a billiard table licence for his premises in Railway Ave, Wyalkatchem in Sept 1914 and I have not located him after this date.

JOHN SUTHERLAND MACKAY lived at 5 Piesse St, Boulder when he passed away in December 1908 and is buried in Boulder cemetery.

PERCIVAL STAR DAY applied for a license for the Metropole Hotel in Burt St, Boulder in May 1906. This was his first time in the hotel business and he passed away in Carnarvon hospital on 24th June 1908 aged 36 years. He left a wife Josephine and two young sons. His Probate notice in the newspapers stated he was aerated water manufacturer of Port Hedland. I believe he moved here early in 1908 and took over Gummow’s Aerated Water factory. He named it the Star Aerated Water factory and his friend John MacKay produced the drinks in February when he was absent. MacKay returned to the Goldfields after the death of Day in June 1908.

His wife Josephine stayed in Boulder until late 1920 where she conducted a registry office and then moved to Outram Street in W Perth. In Perth she conducted the Girton Employment Agency in Barrack Street and passed away in October 1966 aged 88 years.

DAY & KENNEDY marble bottles have the trademark D K and Boulder City and have 4 dimples and come in small and large sizes (185-235mm). Made in Melbourne.

GYNN J M His stoneware ginger beer is a dump shape with cream body and light brown blob top. His trademark J G is in a circle. The bottle is made by Bendigo Potteries. 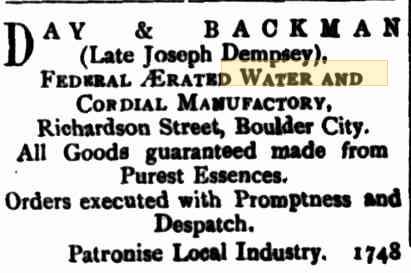 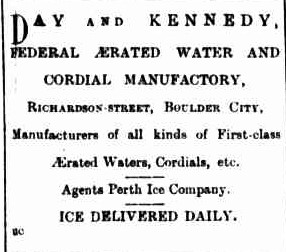 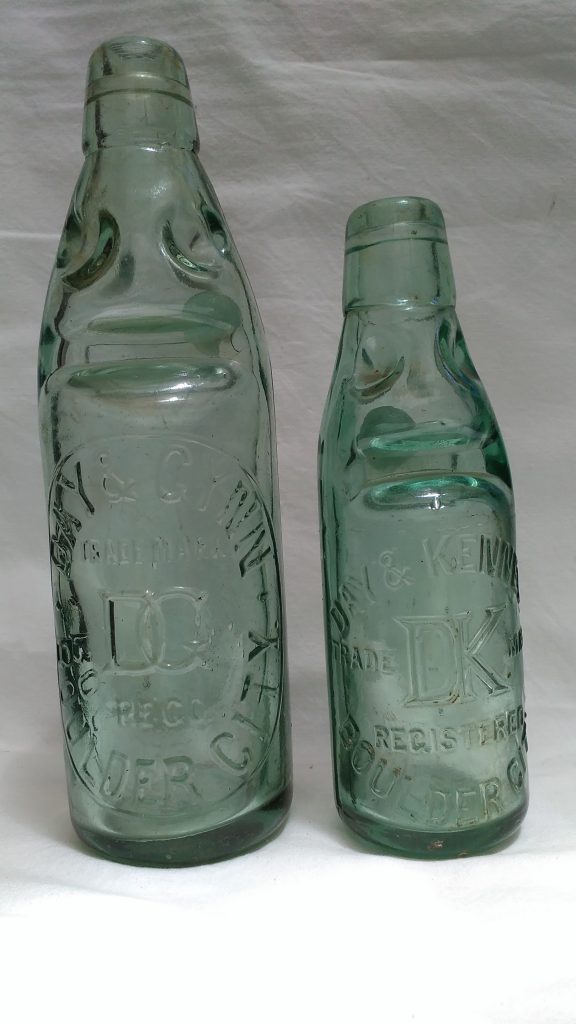 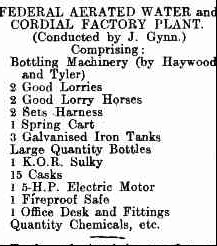 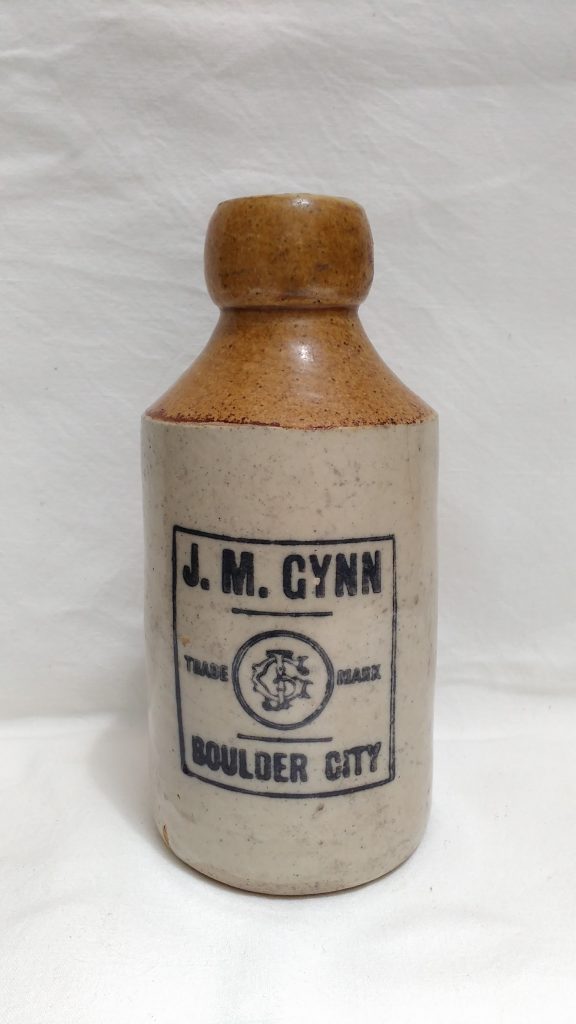