FREDERICK THOMAS CROWDER was born in 1856 in South Australia, the son of Nathaniel Crowder & wife Emily nee Haywood. Frederick’s father was also an aerated water manufacturer having commenced in S Australia around 1854. His son Frederick joined the company when he left school aged 15 years and by the age of 21 years, he was the company manager.

Sometime after June 1877 Frederick moved to WA but his father Nathaniel, continued to produce aerated waters in S Australia until 1881 & then transferred the company to Charles Downer & John Henderson.

William Letchford was also born in S. Australia in 1851 so did the gentlemen know one another in the East before they formed the company?

In 1879 the new factory was in a large room in Fremantle & along the sides of this room were about 30 hogsheads containing Bitters, Liqueurs & Cordials & also Ginger Beer. They had a large spring van to deliver drinks around town, pulled by a draught horse. This van could hold 200 dozen bottles. There was a large well on the block so water was used from this source.

In the meantime, they purchased land in Goderich Street, (later named Murray St) Perth & in February 1881 an application went before the courts for a gallon license for the building.

The company was only in its infancy but already they had expanded to purchase the aerated water and bottling business of Ferguson & Mumme and in May 1881 they were delivering daily to Perth and 3 times a week to Fremantle and they still continued with their own enterprise of Crowder & Letchford.

At Xmas time with drinks in demand they had trouble keeping up with the filling of bottles as the children of the city would break the bottle for the marble in the neck, to use in their games. This was quite an expense at the time, so with many bottles not returned, as they were broken, measures were taken to rectify the situation. The children were encouraged to return a whole Mounts Patent bottle to the Goderich street factory and they would be given a glass alley for every whole bottle returned. It was felt this decision would be cheaper than ordering new bottles from overseas or interstate.

The Goderich Street factory was situated between the Government Printing Offices & the Hospital. The main building was 74’ long x 24’ wide and they produced 14 varieties of aerated waters including Soda, Seltzer, Potass, Tonic, Magnesia & Lithia waters, Lemonade, Ginger Ale, Sarsaparilla, Raspberryade, Champagne Cider & Champagne Beer. During 1882 they stopped producing aerated waters in Fremantle but delivered their wares to the port from Perth.

One of the bottles used in 1882 was a Mounts Patent bottle embossed with the wording Crowder & Letchford, Goderich St, Perth. However, no known examples of this bottle have been found by collectors. I have found a photograph of a Mounts Patent bottle produced for Melbourne Glass Bottle Company and this bottle is a 4 way pour with 4 squashed dimples on the shoulder of the bottle.

In 1884 they purchased land from George Leake junior, at 98 Pakenham St in Fremantle so once again they manufactured drinks in the port and applied for a gallon license for the building in November.

Crowder & Letchford expanded with the purchase of F W Holland Mineral Waters & Cordial business in Mounts Bay Rd, Perth in November 1885. F W Holland used bottles bearing the Patent Barratt & Ehlers and as C & L had taken over the company, they now claimed these bottles as their own.

William Letchford now acquired the company of J. Cale aerated waters, who were connected with the Swan Brewery, in October 1888.

The WA Record, Perth newspaper of 7 Aug 1890 mentioned, that Crowder & Letchford have decided to open a branch in Albany and have purchased a block of land where they intend to erect a factory. However, I have not found any more details written about this proposed factory from the papers.

By November 1895 the famous blue topped marble bottle with the rampant lion inside a shield, the trade mark of Crowder & Letchford and made by Dan Rylands at Barnsley in England, was being used by the company. The Reliance patent bottle is keenly sort by collectors because of the distinction of having a blue top to make it stand out from all the other companies whose marble bottles in Western Australia were usually a greenish tinge with no coloured top. The Esplanade in Perth produced many of these bottles in the 1990’s when work was carried out in this area and uncovered these bottles from days gone by.

Letchford called for tenders to erect offices and aerated water works for the Goderich site in March 1896.  William Douglas Henderson was manager here in 1897 till 1899.

Crowder by now had other business interests. He was a member of the Legislative Council for the S E District, had started the Perth Gas Company and was also a partner in the Fremantle produced newspaper, The Morning Herald. This paper was later amalgamated with the Daily News.

In the early 1890’s rival firm of Donaldson & Collins had commenced business and in 1894 they purchased a quarter acre property in Wellington Street, Perth. They leased the Goderich (Murray St) premises of Crowder & Letchford in 1899 for a period of 20 years. F T Crowder was a shareholder.  Donaldson & Collins occupied the Murray Street site till 1915. However, Crowder died on 2 May 1902 at Cottesloe of cancer aged only 46 years, so Letchford now moved his business to Fremantle. The name W Letchford would now appear on the bottles without the Crowder surname from this time.

C & L drinks were sold in many country areas including Bunbury where Fred Temperley was appointed their agent so Stokes and Company had opposition from the city.

In 1901, R W Allen of Rowlands factory, North Fremantle, found Letchford was using the name Trilby Champagne which was a part of the Rowlands line, so another dispute for the company over rights to the naming of drinks.

William Letchford lived in “Bundi Kudja” at 96 Hampton Rd. in Fremantle. The home was built around 1896. He and wife Louisa nee Hunt had 4 daughters and 3 sons between 1882 – 1894. Three of his daughters never married and son Rossmore Hunt Letchford went farming at Trayning. Frank Stanley Letchford 1888 – 1938 worked with his brother William Ross Letchford 1886 – 1968 in the Fremantle business with their father William.

The business progressed and the 98 Packenham Street factory was used as an office and factory and the grounds also had an underground tank which held 30,000 gallons, storage shed and stables. In March 1908 this building was sold to Craig Morton and it was then used by Seppelt & Sons.

The company now consolidated their business in Hampton Rd, Fremantle. William’s son, W R Letchford joined his father in 1912. Around this time, aerated water company employees disputed wages and conditions and stop work meetings took place which naturally hindered the output of drinks. However, Letchfords, had already increased wages so their employees continued working and saved the company undue stress.

William Letchford died on 18 January 1913 aged 61 years. By May, his son William Ross Letchford lodged an application to be registered as the proprietor of Fremantle Town Lots 734, 735, 736 & 761 Hampton Rd and so began the W R Letchford journey.

Stables were attached to the business as horses were still being used at the time to deliver around town. In 1916 their drinks now included Dry Ginger Ale & Stone Ginger beer. Williams brother Frank also worked in the factory by 1919 and they now delivered by Chevrolet truck.

During the Depression years, Letchfords did not seem to feel the financial strain as in July 1931 work commenced on a new building for the company in Hampton Road. The main building was 90’ x 55’ partly of brick, wood & iron and was to be attached to a 2 storeyed brick annexe measuring 40’ x 20’. Also, office accommodation of 2 rooms was to be provided. Messen & Mills of Claremont were the builders and the building would feature up to date lighting and ventilation.

W R Letchfords eldest son Jack Rossmore Letchford was now 17 in 1931 and he joined the company.

On 28 February 1933, Frank Stanley Letchford dissolved his partnership with his brother and William Ross Letchford continued producing the drinks from Hampton Road.

In the 1940’s Letchfords drinks were now produced in 4 1/2 oz, 6oz, 8oz, 10 oz and 26oz bottles in amber or clear glass. Their wares were available across the Metro area as well as Mandurah where the Capitol Theatre made special mention of Letchfords drinks being available to theatre goers.

During the war years, they employed many women in the factory because of men being overseas, however later they were mainly only involved with office work.

In 1968 W R Letchford died aged 82 years. His wife Hirell Letchford nee Staton died in 1993 aged 100 years. They had married in 1913 and she had witnessed the company survive from its early days, the war years and until it’s closing in 1978. Her son Jack stayed with the company until it closed and he died in 1988 aged 74 years.

The Hampton Road premises was sold to Belvista Homes and in July 2016 the premises, now named Painted Earth, has the W Letchford name clearly impressed on the façade at 88 Hampton Road, Fremantle. The trade mark of his Rampant Lion inside a shield is also still on the building. Marble bottles of Crowder & Letchford and W Letchford feature many different impressions of the Rampant Lion and most collectors have many of these bottles on their shelves. Some of these bottles were made by the Melbourne Glass Bottle Co, Kilner Bros London, John Lamont of Glasgow,also some with base marked DON, and FBH for the bottles made in S Australia. The company also had ceramic labelled bottles so from the early days of the marble bottle and Maughan shape bottles collectors have a variety of shapes and bottles from the company. 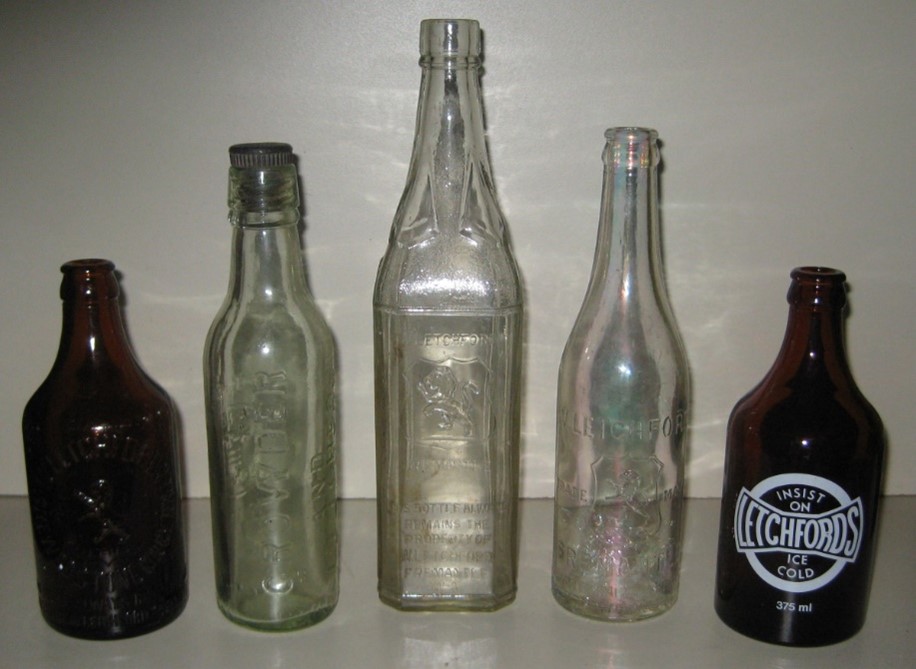 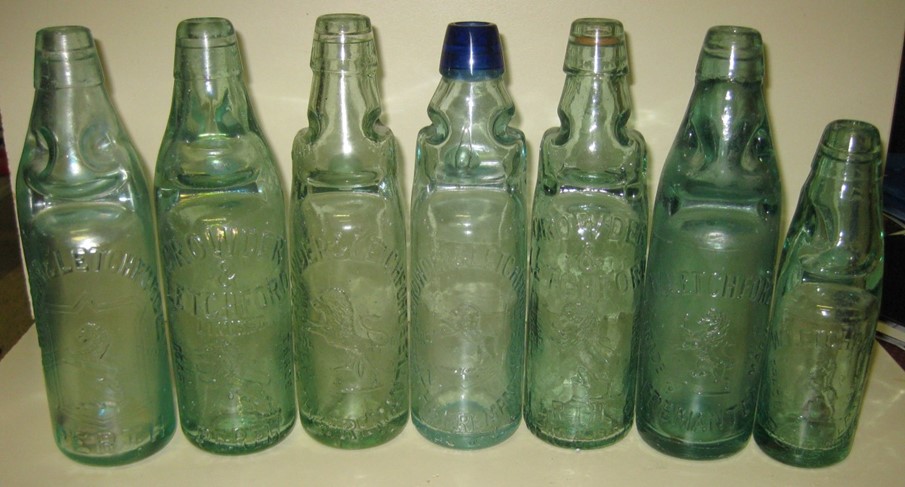 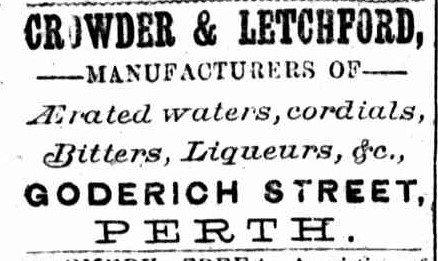 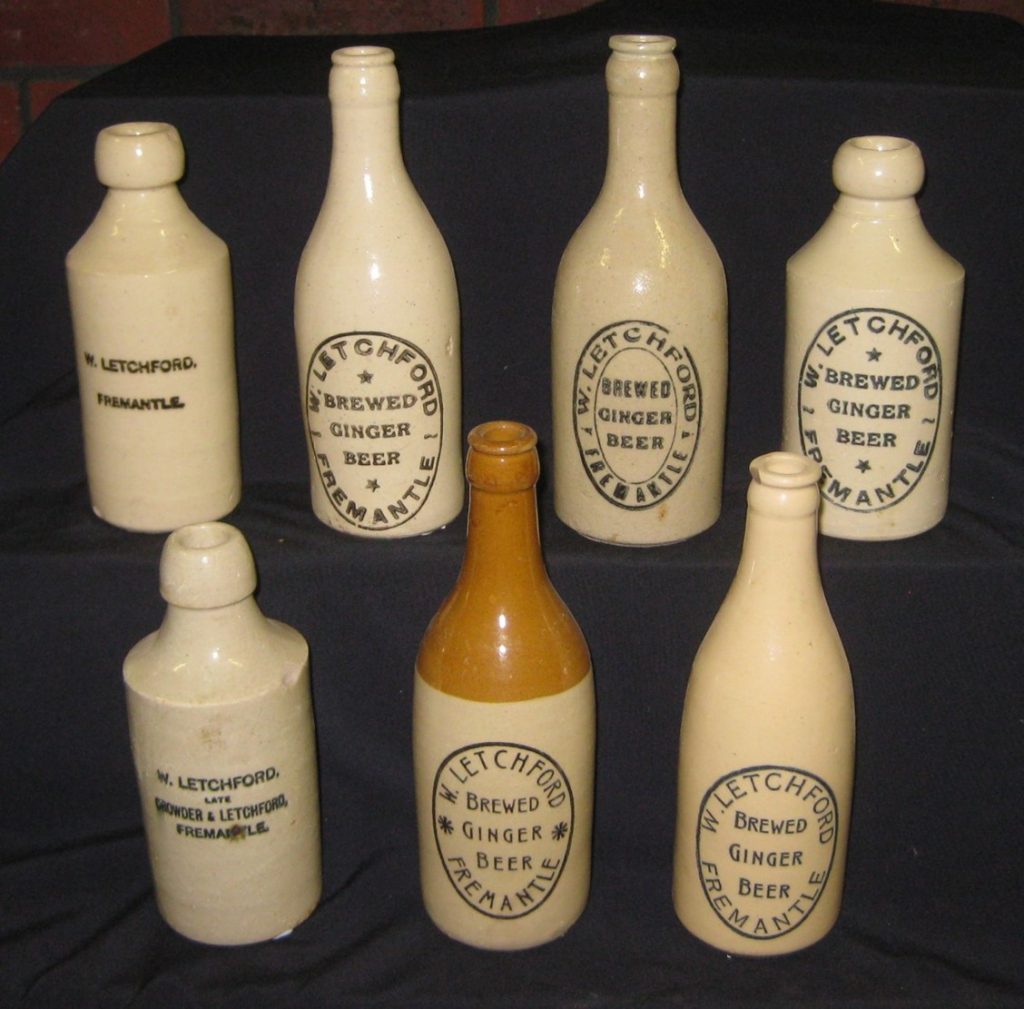 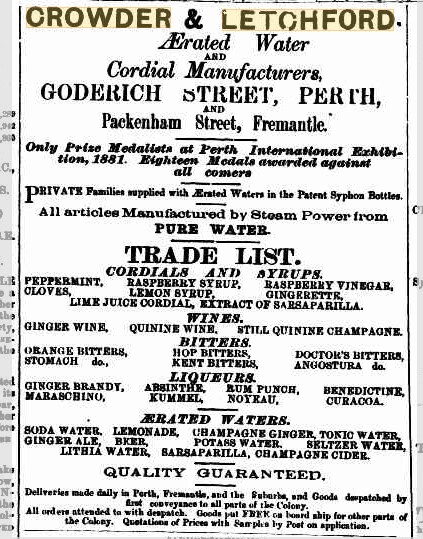 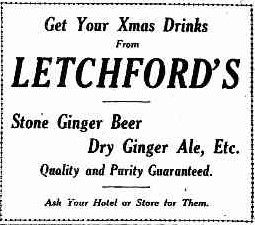 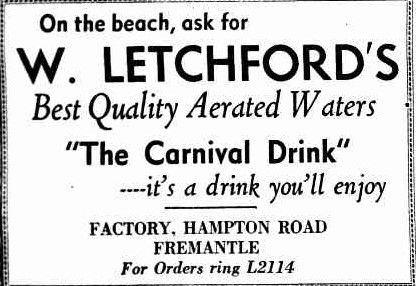