Collectors may have a rare 7oz clear crown seal from the company of C L Croker of Geraldton on their shelf.

Carl Louis Croker was born in Islington, London, England in May 1891 to Alfred & Ada Croker, a Painter & Decorator.

In 1910 aged 19 years Carl arrived in Fremantle & became a Bookkeeper/Clerk for Millar’s Ltd, the timber trading company, in their offices at Perth & Bunbury.

In Bunbury he met Ann Kelly & they married there in 1913.

In 1915 the couple were living in Alma Street, North Perth & at the out break of WW1, Carl enlisted in the AIF and his wife moved to England during his years away. On return they settled in Nedlands where a son was born in 1919. Sadly, this child was killed in an accident in 1927 aged 8 years and may be because of this tragedy the family moved to Mullewa where Carl’s brother in law C E Kelly asked him to help manage a hotel in town.

While here, Carl became friendly with Samuel Marshall Yoxall. Yoxall was a member of the Melbourne firm of Yoxall Bros & had always been actively engaged in aerated water manufacture. He had been in Mullewa since 1928 & previously was manager of Horonda Brewing in Perth and his aerated water factory in Mullewa was a successful enterprise.

In 1932 a verbal agreement between the pair saw Croker agree to manage Yoxall’s new premises in Geraldton. Yoxall had leased the Star Factory in Lester Avenue from Waltho & Son & Croker was to manage the concern by himself with occasional input from Yoxall. The factory would still be known as Yoxall’s.

Croker is listed in the Wises Post Office Directories in 1935,36 & 37 as manager in Geraldton.

The partnership dissolved as of 28 June 1934 when a notice appeared in the newspaper that Yoxall would retire from the firm in Geraldton & the company would carry on under the name of C L Croker.

In 1936 Yoxall of Mullewa issued a writ claiming Croker wrongfully sold Aerated Waters under the name of Yoxall contrary to the agreement between them and claimed damages.

In 1936 he is listed at the Shamrock Hotel in Geraldton and as a cordial manufacturer, however, the company was in trouble and Croker filed for bankruptcy in Nov 1937.

As the company only traded for a short time, bottles bearing his name, C L Croker are quite scarce. 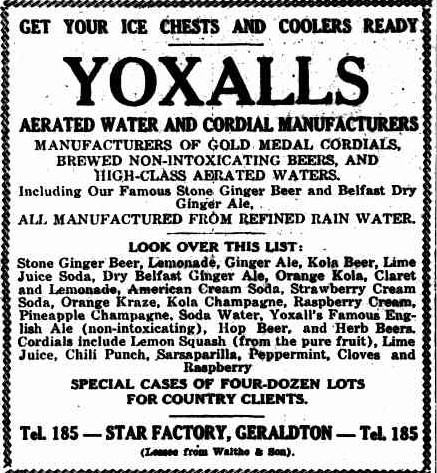