CAMPBELL DEMPSTER was born in Northam in 1902. He married Derby Hospital nurse Janet Duncan in Broome in 1940 and in 1941 they were living on Liveringa Station about 100km south east of Derby, Western Australia. Sadly, she died on 24 January 1941 and is buried in Karrakatta Cemetery.

Dempster moved to Port Hedland after his marriage to Audrey Wilson in 1947. He formed a Company and advertised Beta – Cola from September 1947 in the Northern Times. His last ad for this drink was 20 May 1948. He led a busy life as his wife gave birth to twins in this year and in November he moved to a new store where his goods included hardware, tools, motor parts, drapery and groceries. He purchased L Taplins garage and motor repair business in December. In November 1949 he now included the words Universal Providers in his ads and cordials and aerated waters. He expanded to include Marble Bar and Nullagine districts for his Ford dealership in 1950.

Dempster’s aerated water business in Wedge street was fined for using WAGM bottles against their regulations as did other cool drink businesses at the time in 1951 and he vowed to not use their bottles again. In July 1953 he again was noted as using the barrel trade mark bottles of P + F, Be Co Ltd and also the triangle trade mark of WAGM, including those initials.

Dempster died at Port Hedland in 1970 and is buried in Karrakatta Cemetery with wife Audrey who passed away in 1964. 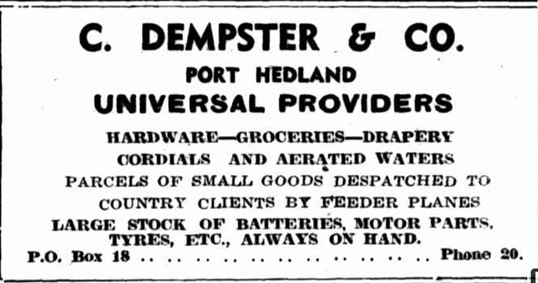 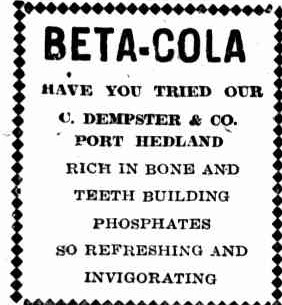