Angel John Bussola was born in Lecco, Italy in 1883, the son of a wine merchant. He arrived in W.A. sometime before WW1 & became a naturalised British subject. He enlisted in the Army in 1916 and whilst overseas on leave in England in 1919, he married Elsie Tester. On his return to W.A. they settled in Napier St, Cottesloe.

On 12 Feb 1921, he transferred the Publican General’s License of the Gresham Hotel in John Street, North Fremantle to Frank Butcher. Bussola, then became Licensee of the Beaufort Billiard Saloon at 86 Beaufort street, Perth and transferred the Licence to Francis Morrell Baxter on 8 March 1922.  He next formed a partnership with Albert Edward Heathcote under the name of the Perth Light Lager Co and the Star Aerated Water Company. In December 1922 their speciality, was Belfast Dry Ginger Ale, available at leading hotels and cafes. Heathcote retired on 12 Feb 1923 and Bussola carried on the businesses under both names. A branch was located at 86 Beaufort St, Perth.  He had also been in partnership with Charles Patrick White for the Cottesloe Sea Beach Bathing Sheds and White carried on with this business on 29 Aug 1923.

By 1926, Bussola was the father of 2 children, June & Kenneth & was producing Aerated Waters at 86 Beaufort St. The Star Aerated Water Co, remained at these premises until 1931. Were his bottles embossed or only paper labels? Do cool drink collectors have a Star Aerated Water bottle in their collection from Bussola’s premises?

In the meantime, his wife Elsie was the proprietor of the Star Lager Saloon at 120 Barrack St, Perth. Her husband had been partners with James Marnham in this venture, but Elsie Bussola took over on 17 December 1927. It later became the Spot Lager Saloon in 1938.

Angel John Bussola, known as Jack sold his Aerated Water business to Arthur Street in 1932. Bussola, now formed a partnership with 4 others & on 29 Nov 1929 started Bussola Macaroni Company at 126 Hay St, Subiaco. However, the partners had a falling out and in February 1931 he moved to 87 Guildford Rd, Maylands & began the Atlas Macaroni Co. In December 1938, A Penberthy, of the Bussola & Golden Sheath Macaroni Co at 126 Hay Street in Subiaco placed a notice in the papers that there was no connection with Angel John Bussola’s Atlas Macaroni Company situated in Mount Lawley. Bussola’s son Ken, was born upstairs at 86 Beaufort Street & he remembers an employee riding his bike from Mosman Park to Beaufort Street everyday.  Jack also had a truck with no doors & his young son nearly fell out one day when the truck went over a bump in the road while doing deliveries. One of Jacks friends was William Jose formerly of Geraldton. Angel John Bussola died on March 13 1967 & wife Elsie died in 1983.

Arthur Street was born on 5 November 1869 in Reading England. He married Mary Drewett late in 1890 at Guildford, England. By 1903 they had a son Frank & decided to make W.A. their home. They arrived in Albany in June 1903 & settled in Victoria Ave, North Fremantle. Arthur was an engineer, but became manager of the Don Bottling Works, George St, North Fremantle in the same year. Sadly, Mary died in 1904 after they had only been in W A for 10 months & left Arthur with a seven year old son, to rear. He now decided to go to the goldfields & in 1908 became a cycle agent at Davyhurst. Cycling at that time was its heyday, so I expect he hoped to make money in this endeavour before returning to the city. In 1910 he was in business in Shenton St, Menzies but returned to the city in 1914 as a cycle manufacturer & garage proprietor, in James St, Guildford.

In 1915 he joined the Perth Fire Station as a fireman. As WW1 approached, Arthur enlisted in the Army, even though he was 47 years old. His time was short in service & he returned to Perth & married his 2nd wife Lily Wicks in 1919. Son Frank died aged 24 years in 1921 & Lily & Arthur settled in Ethel St, North Perth. In 1929 he had resumed his occupation as a fireman and continued here until late 1931.

By 1932 he again turned his skills to Aerated Water Manufacture & took over Bussola’s business at 86 Beaufort Street. Arthur Street named the business the Metropolitan Aerated Water Company. In November 1933, William Fred Jose (grandson of William John Jose of Trefusis and Chapman & Jose factory, Geraldton), was driving a truck delivering cool drinks for Arthur Street when the engine caught fire. He managed to extinguish the fire by pouring some of the cooldrinks over the flames.

The business flourished & most crown seal collectors have a 30cm high, 26oz impressed crown seal cool drink bottle in their collection. His trade mark emblem featured an M in a stylised banner on the front of the bottle. Arthur was also President of the Model & Experimental Engineers Society of W.A. & died on 3 December 1945 aged 75 years. His wife Lily died in 1963. After Arthurs death the business moved to the rear of 86 Beaufort St & C. T Rocke commenced making Aerated Waters in this building.

CLIFFORD THEODORE ROCKE had been a manager for Mackay’s Aerated Water Company in November 1936 until approximately September 1941. He was then for a short time manager for BCD & Piesse Ltd at 200 Wellington Street in Perth.  In August 1945 he was no longer connected to this establishment and by June 1946 is proprietor of the Metro Cordial Company of Beaufort Street, Perth. He left for Sydney that month to buy new equipment for the business. Sometime before November 1948 the business moved to Scarborough Beach Rd, Osborne Park. Locke gave his occupation as Manager in the Electoral Rolls 1943 – 1958.  In February 1952 George Bennett who had been manager of Harvey Aerated Water Co for the past 2 ½ years moved to Perth where he became manager of Metro Aerated Water Co at Scarborough.  By July 1952 the company had closed down and Weaver & Lock in South Perth purchased the plant, bottles and cases of the company. Rocke may have had someone with experience in the manufacture of aerated waters, to produce his cool drinks when he was in control of the company. Rockes, 26 oz and 28cm high crown seal bottle featured the trade mark METRO in a circle with the wording surrounding the mark – SUPERIOR AERATED WATERS. He died in 1992 aged 82 years and lived with his wife in Floreat Park. 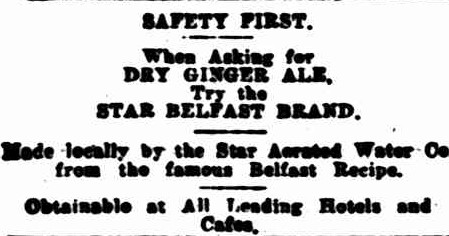 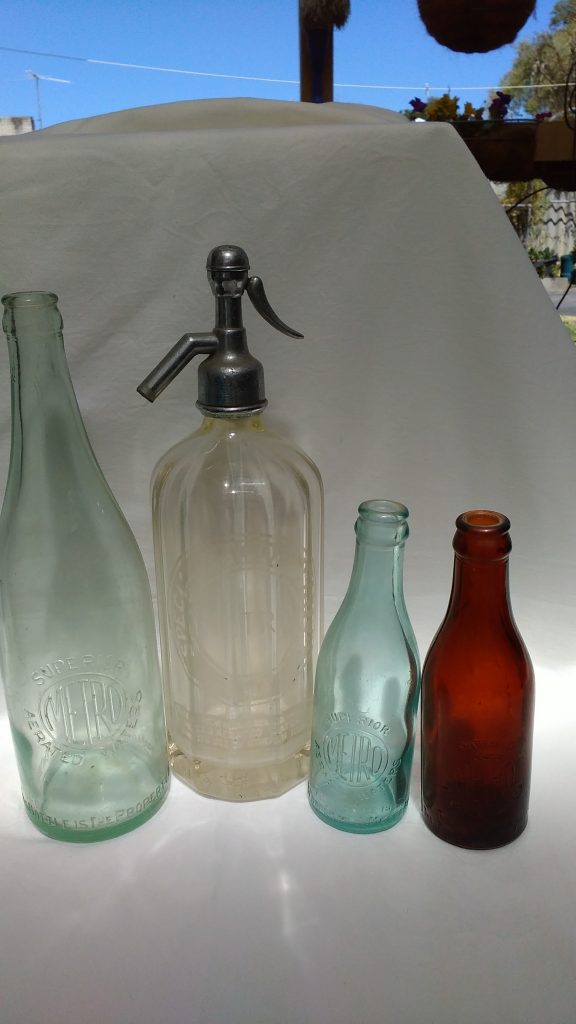 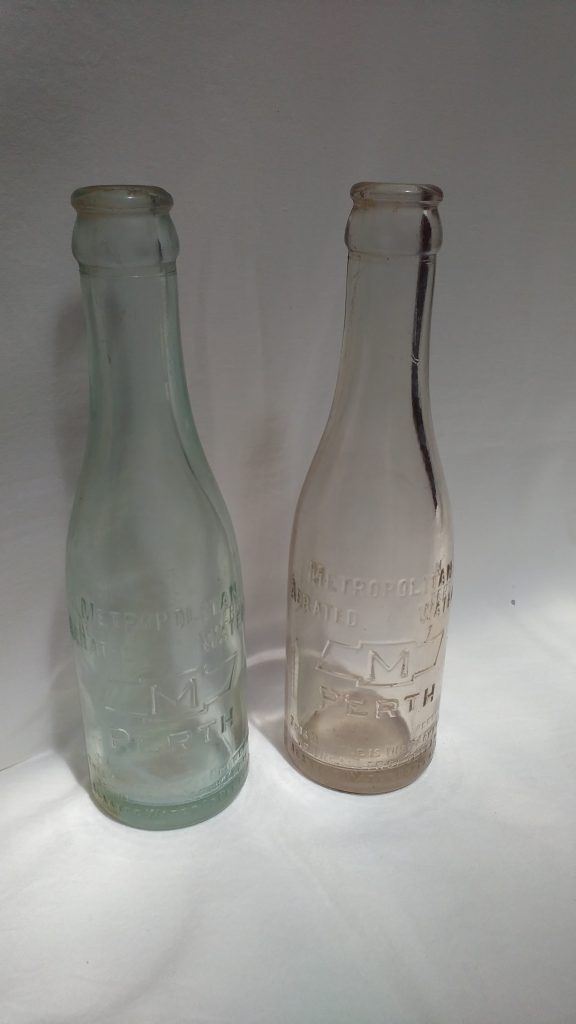 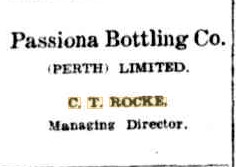