Bruce Rock is in the eastern wheatbelt, 243 kilometres east of Perth and 48 kilometres SW of Merredin.

The town was gazetted in 1913 and the first aerated water company was started by GILLESPIE JAMES MACDONELL.

He traded as Bruce Rock Bottling Works and moved to the town in 1914 where he conducted an auction mart.

His ad in the Merredin Mercury newspaper in Dec 1915 stated “he had the best mineral waters & cordials in the state”. The premises consisted of a stone building on Town Lot 12 at the rear of shops in Johnson Street. He was also the hairdresser and tobacconist.

In 1916 he conducted a dance in his hall & the proceeds were given to the local branch of the Red Cross.

His many business interests included fancy goods, stationary, confectionary, hairdressers, tobacconists and the cordial factory but by the end of January 1917 he had filed for Bankruptcy.

MacDonell’s marble bottle came in small and large sizes, with the words Bruce Rock Bottling Works imprinted on the bottle. The small size was made in Adelaide and large size in Melbourne. The bottle had an 8 point star.

MacDonell’s businesses went to auction, including the stable and in April 1917 Charles Hynam purchased the property. He declared he would complete the stone building at the front of the cordial factory

I have not found anymore information concerning aerated waters for the period mid 1917 to March 1919 although Marin Posa did sell cool drinks wholesale and retail from his establishment in 1917.

Posa was a fruiterer, greengrocer, tobacconist and confectioner at Bruce Rock. He wanted to buy MacDonells property but his offer was not accepted and Charles Hynam clinched the deal.  Hynam’s wife had a boarding house in the town and I have not found information linking him to running the cordial factory. Charles Hynam later moved to Perth and died in 1937 while on holiday in Tasmania.

Posa sold this business in Aug 1917 to Stanley Lonsdale the local butcher who expanded his empire at Bruce Rock.

In March 1919, TALBOT & HANSSON established the Bruce Rock Cordial Factory in Johnston Street. World War 1 had just ended and they found ingredients for the manufacture of their drinks in short supply. Luckily that had enough on hand to fill the quota for the local population. The company traded until Oct 1919, when Hansson retired and ARTHUR JOHN TALBOT was joined by his father in law WILLIAM JOHN THORNE.

They traded as THORNE & TALBOT. Talbot was born in Melbourne in 1893 and Thorne was born in Ballarat in 1853.

Thorne was an architect in Victoria & arrived in Western Australia in 1897 where he settled in Fremantle & he was architect for several churches in the area. He went to Boulder in 1899 before farming at Babakin in 1910. He joined his son in law at Bruce Rock in 1919 where his expertise as architect for the Council saw the Town Hall, Hospital and many other town buildings erected during his time here.

In 1922 they spent 300 pounds to upgrade the building and plant and the improvements included a spot lager lounge bar and their tearooms could now seat 50 people.

He transferred his auctioneer’s license to Albert James Rose in the same month.

Dean moved to Goomalling in 1939 as a storekeeper and continued in business there till the late 1940’s. He died at Mt Lawley in 1979 aged 87 years.

Rose took over Deans cordial factory in July 1930 even though Dean applied for additions to the factory in Oct 1930.

Rose applied to the Council in March 1932 to move his cordial business from Deans premises to McPharlin’s premises opposite Millars timber yard and advertised his cool drinks and other goods at cheap prices to keep goods to a minimum for transfer.

The new factory was on the corner of Bruce and Butcher Streets, Bruce Rock. He asked permission from the Council to move the “Dinko” aerated water sign from the old premises and erect it opposite the new factory.

He also wanted to sell cool drinks and brewed drinks on the sports ground on a Sunday and other sporting days.

In June 1933, he advertised the premises for sale and in Aug 1933 Ernest Chisholm Watson of Donaldson & Collins at Northam purchased the business.

Rose continued in the town conducting a greengrocery business next to Economic Stores.

Watsons late father D S Watson carried on as a cordial maker in Albury, NSW (Watson & Young) for 38 years. Ernest managed his father’s business & moved to Melbourne & then to Donaldson & Collins in Murray Street, Perth in 1914. He managed their Northam factory from 1920 till 1928 and moved to Bruce Rock in 1933.

In Sept 1933 he stated, “late senior partner of Donaldson & Collins registered Red Hand cordial factory of Northam & advises the general public he has taken over the Dinko cordial factory and is now open for business”.

His ad had the initials WBR Cordial Factory, Bruce Rock.

In 1934 his ad featured brewed and hop beer and the well known WBR brand.

He died suddenly at Bruce Rock in June 1939 aged 72 yrs and is buried in the Bruce Rock cemetery.

His wife continued with her late husband’s business until John Godfrey Haslam purchased the factory in September 1940. Wilhelmina Watson died in 1943 aged 69yrs at Bruce Rock.

Haslam lived at Bruce Rock in 1937 & had an interest in music and concerts and during his short time here he conducted many social nights for the local population.

Haslam and his wife Ada Vera Haslam announced Watsons Cordial factory was under new management in Aug 1940 and they welcomed old and new clients.

In December 1940 he announced the price of cool drinks would increase as he had been charged extra by the Government for Carbonic acid gas.

In May 1941, bottles were in short supply, I expect because of shortages during the war years. He had a marine collector’s license and advertised he had the sole right to collect bottles in the district. He would pay 11 shillings a dozen for clean bottles excluding bottles which once held kerosene, phenyl or oil.

He left suddenly that same month and went to Kalgoorlie where he took over the Maritana Wine Saloon. He died suddenly at Kalgoorlie in June 1945.

He was born in Russia and arrived in Fremantle in 1902. In 1911 he had a fruit business with assistance from his Uncle Meyer Breckler and his brothers Alexander and Samuel Rappeport. Their business interests were also in Perth and Lionel conducted the fruit business and attached wine saloon at 153 High Street in Fremantle. However, the Council rejected the wine licence and the business declined. Breckler retained the High Street premises after court proceedings and Lionel Rappeport decided to join the WW1 forces. In 1935 he lived in Highgate.

He moved to Bruce Rock in 1937 where he was manager of the Economic Fruit and Vegetable Mart and he then purchased the Bruce Rock Cordial Factory in 1941.  He continued to supply the district with fruit and vegies as well as cool drinks. The papers stated “he had taken over Watsons Cordial Factory”. Haslam had conducted the factory for sometime after Watson had died but Watsons name was still well known in the town.

In December 1942 he wanted to buy unbranded bottles for 2 shillings a dozen and he still supplied fruit and vegetables to the town.

The factory was now called Rappeports Cordial factory and his ads appeared until February 1945 when Kelly’s Aerated Water Factory appeared in the newspapers.

Lionel Rappeport moved back to Perth and opened for business at 41 Forrest Place, Perth and died in Perth in 1960.

After 3 years he relinquished the “Dinko” cool drink business and Mr and Mrs J McMahon were now the new owners.

Charles McMahon known as Jim McMahon also conducted a greengrocery and fruit store as well as the manufacture of aerated waters from February 1948.

McMahon was born in Subiaco in 1919 and his total time here at Bruce Rock can not verified as the newspapers do not state when he retired to Perth. He died at Noranda in 2009.

Many cool drink collectors have McMahon’s 26 oz brown crown seal bottle with his trade mark J M in an oval on the shoulder of the bottle. 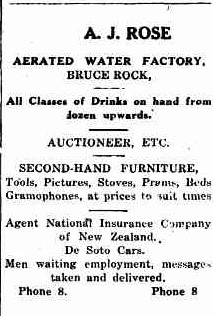 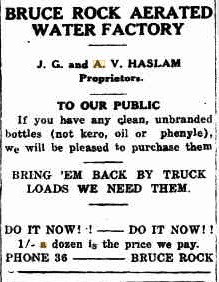 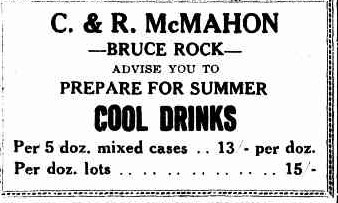 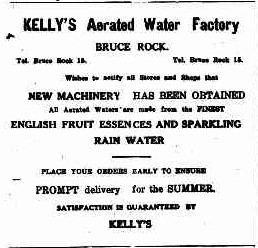 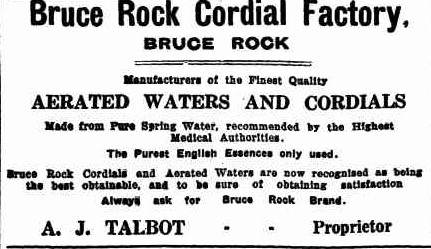 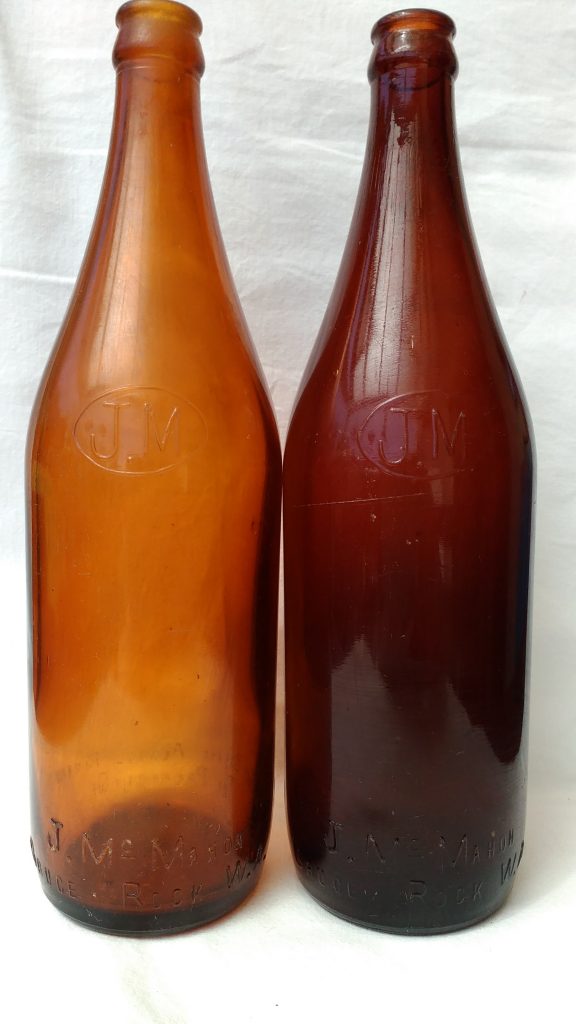