AW Sales “Rooster” trademark, Perth and Fremantle marble bottle is most sort after, because of the pictorial aspect of this bottle. It is a Dobson type patent and has the word “Pinnacle” on the reverse of the bottle. It comes in large and small sizes. No ginger beers were produced by the company.

Alfred William Sales was born in Ballarat, Victoria in 1868. By the late 1890’s he had moved to Fremantle. His parents and other members of the family also moved to the west and by 1901, AW Sales worked at the Federal Carrying Company in Henry Street, Fremantle.

In the same year he married Bendigo born Henrietta Alcock in Fremantle. By coincidence the large business of Alcock and Company in Melbourne produced a Champion Brand Billiard cue in 1897 which also had a “Rooster” as its trademark. I have not traced a connection for Henrietta to this family but her husband used the rooster for his bottles and it could be just a coincidence, between the two.

In 1902 the family lived in Agnes Street, Beaconsfield and he was listed in records as a clerk. He remained in Fremantle till 1906 and it is believed his marble bottle is from this period 1902-1906 but I have not found a trademark registration or any records relating to his ownership of an aerated water factory anywhere until his death some years later.

In 1906 he became a Commercial Traveller and the family moved to Kalgoorlie where they stayed for 14 years.

He was a representative for the pork producer Hutton and Co & inspected shops in the Kalgoorlie area that sold their goods whilst still doing his duties as a Commercial Traveller.

In 1920 the members of the Master baker’s union held a dinner to honour his services as he had resigned as the secretary of the Union and Town Councillor after 14 years, to pursue his business interests and public duties. He received a canteen of cutlery in appreciation. A W Sales & Co were proprietor’s of Watson’s Produce Stores at Kalgoorlie in 1922.

Back in Fremantle Clement Leslie Jones licensee of a shop at 95 Canning Highway, East Fremantle transferred his gallon licence to AW Sales on 26 Sept 1921. This business also sold groceries. I believe the business was on the corner of Canning Highway and Sewell Street in East Fremantle. Alfred and Henrietta settled in Hammad Street, Palmyra. He also purchased the Produce merchants store at 138 Aberdeen Street, Perth in the same year.

The gallon licence in E Fremantle was transferred to Walter Charles Parsons on 2 Dec 1925.

AW Sales passed away at Spinoza St, Mt Lawley in 1929 aged 60 years. His wife went to live with their daughter and passed away in East Fremantle aged 99 years in 1972. 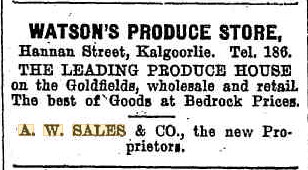