ALFRED JOHN VINER was born in Reading, Berkshire, England in 1857. He was the eldest child of John Viner, carpenter/joiner and his wife Elizabeth nee Wicks. On the Census of 1881 Alfred was 23 years old and lived in Blakes Lodge at Reading and was a carpenter/joiner, like his father.

By 1887 he had arrived in Australia and in April 1888 he took over the business of F Horrocks & Company, the Dandelion Ale brewer, in Brisbane. He had the rights to use Horrocks trade mark & labels but Viner decided he would remove Horrocks name from the labels and insert his own name. In January 1889 he is listed as an aerated water manufacturer in Montague Street, West End, South Brisbane and the company was called the Polar Bottling Works. By December the business was liquidated and the creditors agreed to accept 6 shillings in the pound and Viner then moved to Western Australia.

In November 1890 he was in Fremantle and applied for a gallon licence for the building once occupied by J A Herbert, as a mineral water factory. H BROADHURST became his partner in May 1892 & the aerated water and cordial business together with Ale and Porter bottling, would now be called, BROADHURST & VINER. Viner would discharge all his previous liabilities.  In June they placed an ad in the Daily News to say they had purchased a consignment of Tolley & Co aerated water bottles marked Ryan & Co and the trade was warned against using or filling these bottles. Ads appeared for the company in the Daily News until 29 August 1893.  On 30 Oct 1893, H BROADHURST disposed of his shares in the firm Broadhurst & Viner and Viner would continue to produce the aerated waters, cordials and ales.  He wanted a man to deliver his wares by horse and cart in Perth in October 1893. The business was in Queen street, Fremantle and it was also mentioned as having a branch in Perth in December 1892. In July 1894 Viner put the business in the hands of a solicitor and it was listed for sale as a going concern. The plant consisted of brewing utensils, circular saw, iron bench, a large quantity of soda water cases and bottles, plus sundries. Broadhurst & Viner used Dan Ryland patent Acme bottles.

During the 1890’s Viner was secretary of The Western Liedertafel, a musical group who performed at concerts in the district and Viner himself was a vocalist on many occasions.

I believe sometime later he became a draftsman & illness took him back to his home town in England in 1903 and he died at Reading on 30 September 1904. He is buried in the London Road Cemetery in Reading. His wife Emma Susannah nee Turner remained in Australia and she died at the home of her son in law, George L Davidson in Hill Street, Fremantle in 1952 aged 90 years. 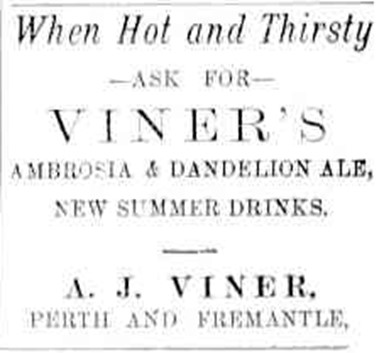