Alfred Gillham, his brother in law, William Henry Hartley & Archibald Sparks formed a company with capitol of 3.000 pound & divided into 1pound shares in July 1937. This aerated water factory was formerly the company of Edward Reeder Atkinson 1933-37.

Gillham was primarily a hotel owner, who became involved in Aerated Waters before Coca Cola’s influence saw the demise of many WA local companies.

Alfred Gillham was born in 1890 in Reading, Berkshire, England. His father was a general dealer and died when Alf was only 8 years old. His mother Harriett was left with 5 young sons and in 1912 she decided to settle in WA as 3 of her sons, George, Tom and Alf had moved to this sunny country.

In 1920, Alf married English migrant Elsie Hartley in Fremantle. His mother in law, Mary Hartley was a widow & Licensee of the Jandakot Hotel. She retired about 1921 & moved in with Elsie and Alf in the Davilak Hotel at South Fremantle. By 1925 they had moved to the Coogee Hotel. They next moved to the Commonwealth Hotel at 331 Bulwer St, Perth and Mary Hartley died here in 1930. Her large funeral was attended by many hotelkeepers in the Metro area, Swan Brewery representatives, Lionel Samson & Sons, and aerated water manufacturer W. Letchford & Co. etc.

In 1932 the Mount Hawthorn Hotel was built on the corner of Scarborough Beach Road & Fairfield Street by Joseph Monaghan. Gillham purchased the partly finished premises in June that year after selling his lease of the Commonwealth Hotel (now the Hyde Park Hotel). He finished building the new Mt Hawthorn Hotel in December & opened for business.

In 1936 he transferred the Licence to Richard Hesford. He was now semi retired, and only 46 years old. He resided at 15 Victoria Avenue, Claremont & in the following year of 1937 he formed a company to produce Aerated Waters in Atkinsons old factory in West Perth.

His mother Harriett Gillham died in 1940 and by 1943 William Green had transferred the Mt Hawthorn Hotel license to Gillham so once again the hotel was back in the hands of its first owner.

I feel his Aerated Water business may have been conducted by managers, or someone with experience in that industry, as Gillham was always so involved in the hotel industry at the same time as the factory operated.

Gillham’s bottles are one of the better embossed crown seals in WA and feature a face & hand holding a glass and the words “tastes better” in a stylised G. The bottles are in clear & amber & the company only traded for 10 years (1937- 7th August 1947). His 8 sided, brown crown seal glass ginger beer bottle, is rare and there are only 4 known examples. All bottles are damaged.

The Gillham Ginger beer and the GSR Albany brown glass Ginger Beer bottle are the only 2 companies known to produce this beverage in these 8 sided bottles in W.A. 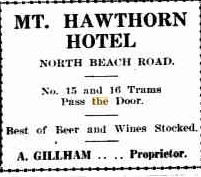 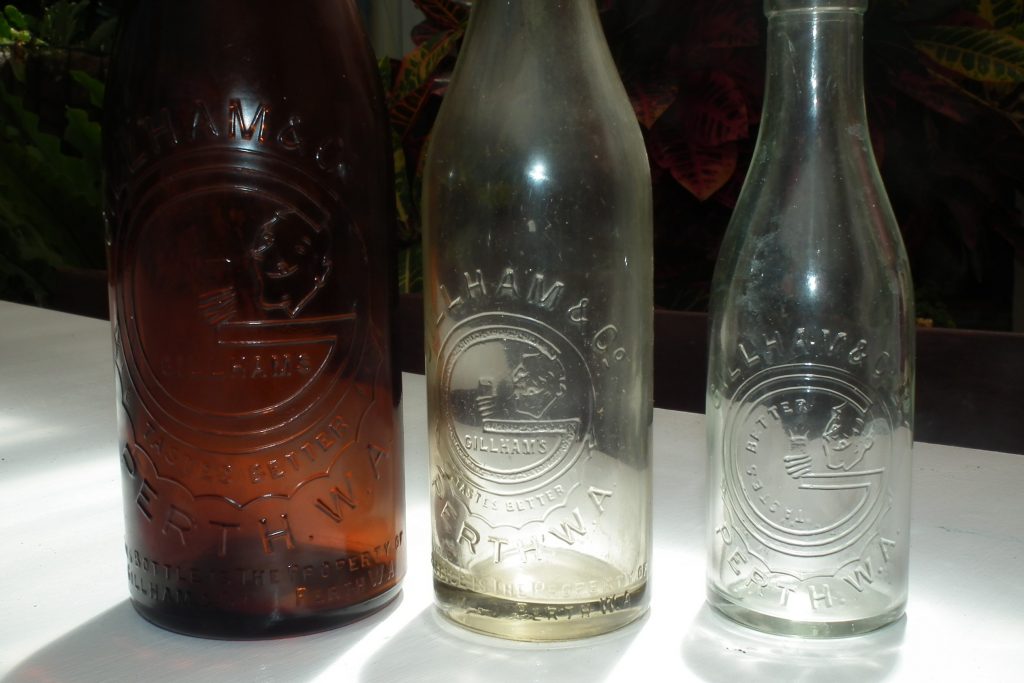