ALFRED ERNEST GUMMOW was born in London in 1860. He arrived in Sydney aboard the “Darling Downs” in October 1880. He was a second cabin steward on board the steamer and was employed until 13 April 1881. He eventually made his way to Queensland and was employed here in 1886.

In January 1889 Messrs Butcher McIntosh, Riggal, Mrs Carboyd and Gummow owned the Crown claim on the Brockman River in the West Kimberleys. This river is only 14.5 k’s long and a gold battery was purchased here by Gummow, McIntosh and Nicholas. It was situated on Salvation Gully, the most defined reef in the field.

In December 1893, Gummow had now purchased a fleet of luggers and was in Broome, engaged in the pearling industry. He also was a storekeeper by December 1894 and owned the “Agnes Donald” a pearling schooner.

In late 1896 he purchased the Roebuck Bay Hotel in Broome. This building was built in November 1890 and at that time was the only hotel in the town. Gummow, continued here with his pearling interests and hotel and the last advertisement under his name for the hotel is in April 1899. He moved down to Fremantle and left J Johnson in charge of his pearling fleet.

Gummow married Esther Florence Coleman in Perth in 1900 and returned to the north where he sold his pearling fleet of 7 luggers and 1 schooner, together with the Roebuck Bay Hotel to Mr Goldstein of Melbourne in September 1901.

He now purchased the Commercial Hotel at Port Hedland for 1,800 pound in 1902. Attached to the hotel was an aerated water factory. In February 1902 a cyclone blew the factory building down but his machinery was not damaged.  In October 1903, his ads boasted, the best wines, beers, spirits in the area and his aerated waters the best in the colony. The hotel was situated on Town Lot 11 and had 2 sitting rooms and 12 bedrooms. He also had a condensing plant for water and there were now 3 hotels in town.

In November 1905 he applied for a Provisional Certificate for premises about to be erected at the mining area of Wodgina. Mrs Marie Fanny Harper had taken over the Commercial Hotel by December and she had formerly been connected to the Ozone Hotel in Perth. Gummow and his wife Esther were living at “Boodarie” in John Street, North Fremantle in 1906 but his hotel sale to Mrs Harper did not go to plan and a Mortgagee Sale in January 1907 saw the licence once again transferred back to Gummow. His wife now joined him for a short time in Port Hedland and by December 1907 the business changed hands.

In February 1908 Gummow called a meeting of creditors and Mr Seeligson seized everything in connection with the Commercial Hotel. Gummow had not been well and was admitted to Fremantle hospital in January 1909. He was diagnosed with cancer and moved to Thursday Island where he died on 5 October 1909. A sad ending to a man who once owned a fleet of Pearling luggers, hotels and was virtually penniless on his passing. 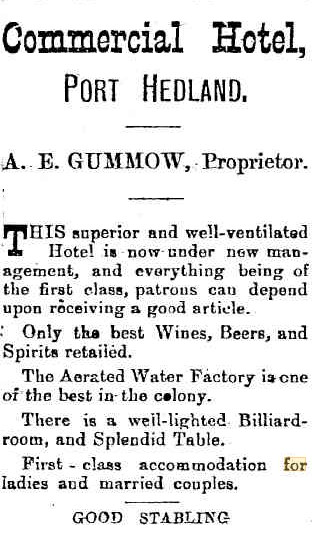 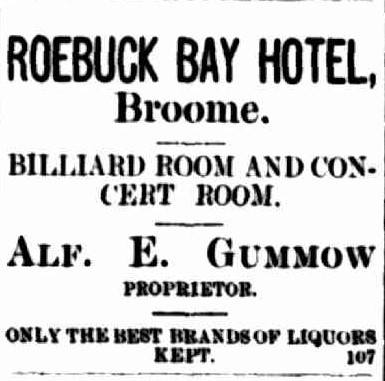