James Raymond Martin was born in 1864 being one of at least seven children to parents Thaddeus Constantine Martin (aka Timothy) and Mary Martin.
The family resided at times around the Maryborough, Avoca and Albury areas in Victoria.
James Martin married Charlotte Byrne, daughter of the Hon. Robert Byrne of “Shellbourne” Toorak Road, South Yarra in 1891 when at that time he was Manager of the Federal Bank, Brighton, Victoria.
By 1896 Martin was manager of the Wodonga Brewery and his wife Charlotte was one of the two Principals however this proved to be a brief venture with some legal issues.
The first likely recording of J.R. Martin in Western Australia is a court appearance involving the Geraldton Brewery versus a Mr J.R. Martin in May, 1900.
By February, 1901 Martin is seen representing the Mutual Life Association of Australia seeking business for that company and appearing for a brief time at the Murchison Club Hotel in Cue.

By 1904 the Martin’s had established themselves at Beverley where in October 1904 James Martin is seen as the Secretary of the Beverley Race Club and he is also running the Beverley Refreshment Rooms.
Records show that the new White Hart Hotel in Beverley was completed around December, 1904 and Martin had applied to be licensee.
An advertisement in 1906 still showed he held the previous business title “late” Representative Mutual Life Assurance as Proprietor.
By 1907 Martin’s wife Charlotte is recorded as running the Railway Refreshment Rooms in Beverley and James is now the proprietor of the Beverley Cordial & Aerated Water Manufactory.
He does not appear to have any previous record as an aerated water manufacturer other than his experience in running hotels.
Coincidently at the same time in 1907, the Lambert brothers Henry and Percy arrived in Beverley with Henry E Lambert setting up a branch of his Pingelly aerated water factory there.
James and Charlotte Martin had acquired significant Beverley land holdings during their brief time in Beverley.

A recording in Wise’s Post Office Directories does show a J Martin as aerated water manufacturer at Kellerberrin in 1911.
It is unlikely to be any other Martin with the same initial and in any case this was another brief venture.
During 1912 the Martin family moved close to Midland Junction where James R. Martin became licensee of the Bellevue Hotel.
The license was transferred from Albert Shannon to Martin on the 3rd December, 1912.
The Bellevue Hotel was located on the corner of Robinson Road and Rason Avenue, Bellevue.
Martin would have taken quantities of his 12oz marble bottles boldly embossed simply “Martin Beverley” to be used in the Bellevue Hotel as some of these bottles had been recovered from diggings at the Blackboy Hill army training camp in nearby Greenmount.
His codd bottle is a Niagara type made by Cannington Shaw & Co, St Helens, England.

Tragically Martin’s wife Charlotte succumbed to pneumonia on the 31st October, 1915 at age 52 and is buried in the Guildford Cemetery.
Martin’s parents Thaddeus (Timothy) and Mary along with some of his siblings had previously ventured to Western Australia though records for his parents other than their death notices either cannot be found or are uncertain.

Timothy deceased in October, 1905 aged 77 whilst Mary had pre-deceased him in June, 1903.
Both are buried at Karrakatta Cemetery. 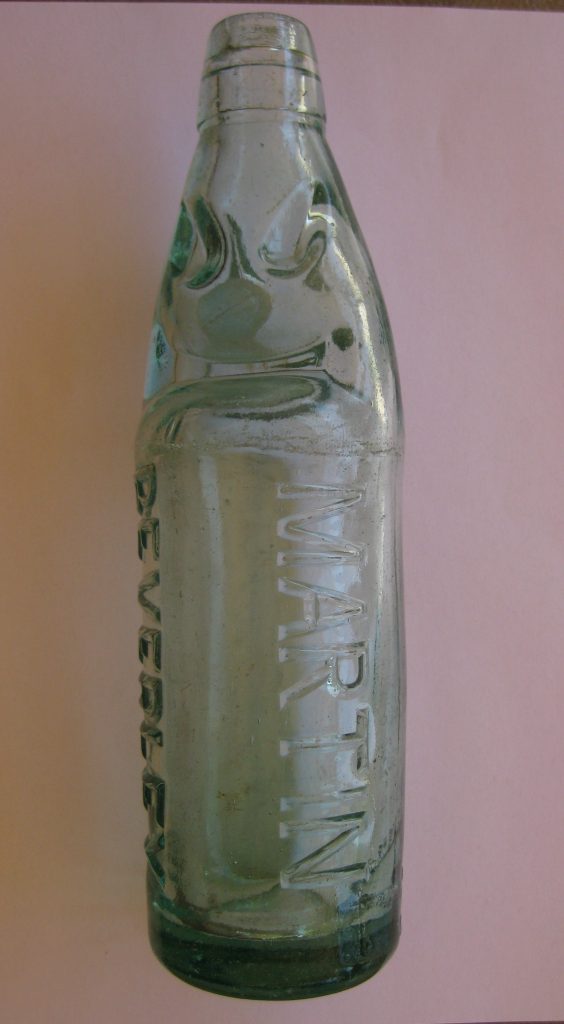