Michael Quain was born c1870 in Ireland and emigrated to Victoria before joining the gold rush in the Murchison. In 1903 at the age of 33years he was a cordial maker in Leonora.

The goldfields town of Nungarra saw a downturn in mining so the nearby “show” at Sandstone saw that town gazetted in 1906. In April 1907 he became a member of the Mt Sir Samuel Board of Health.

Quain moved from Leonora to the new premises in Sandstone in May 1907 to commence Sandstone Aerated Water Works & Cordial factory. He soon became one of the leading citizens in the fast growing town.

The factory was situated in Griffith Street, two blocks from the Black Range Bottling Company run by Messrs Hay & Wallace. They sold cordials, aerated waters, bottled ale stout, wine & spirits, so he had some opposition in town.

He was a foundation member of the Sandstone Race club & also Chairman of the Hospital board for seven years & a staunch supporter of the Catholic church.

He married Mrs Catherine Coffey, the Proprietoress of the Sandstone Hotel in 1910. She had come from NSW after her marriage to Edward Coffey & after his death in 1906, she ran the Shamrock Hotel in Mount Sir Samuel, before coming to Sandstone. The Sandstone hotel was opposite the railway station on the corner of Irving & Hack Streets.

In 1912, Quain sold the Cordial factory to Edwin Duesbury, probably to concentrate his efforts on the hotel business.

Sandstone continued to prosper until the advent of WW1 when the rising cost of the gold production & the departure of many miners for war service, saw a decline in its fortunes.

The hotel license expired in July 1915 & Michael & Catherine decided to move to Geraldton to take over the Commonwealth Hotel from Doug Green. Quain also became a Director of the Globe Brewery Ltd in Geraldton but declined a place on the board in 1917.

Catherine Quain died at Geraldton in 1920 & in February 1921 he transferred the Commonwealth Hotel licence to Oracle Stuart Green.  However, Green transferred it back to Quain in July and Quain and Mrs Maley who had been involved in the lease for 11 years, invited all their patrons to have parting drinks on 3 July 1926. Michael Quain then became a labourer at Three Springs. Catherine’s sons had settled here, so he settled into a different way of life.

However, cordial making was in his blood and by 1936 he was in Henty Street, Yalgoo, using his skills to quench the thirst of the small mining community.

He retired in 1940 whilst living in Yalgoo & died in 1942 & is buried in the Utakarra cemetery in Geraldton.

The M Quain codd bottle is dated between 1907-1912. The marble bottle with the horizontal lettering was made by the company of Cannington & Shaw, St Helens, England. The other two bottles with vertical lettering were made by Melbourne Glass Works. 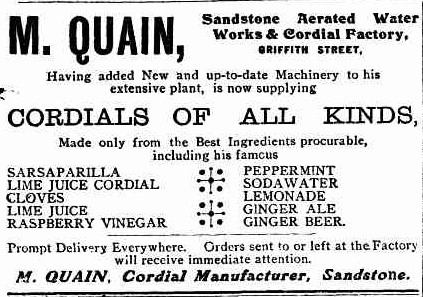 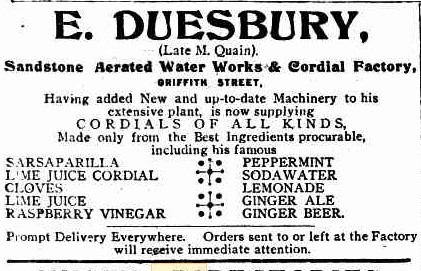 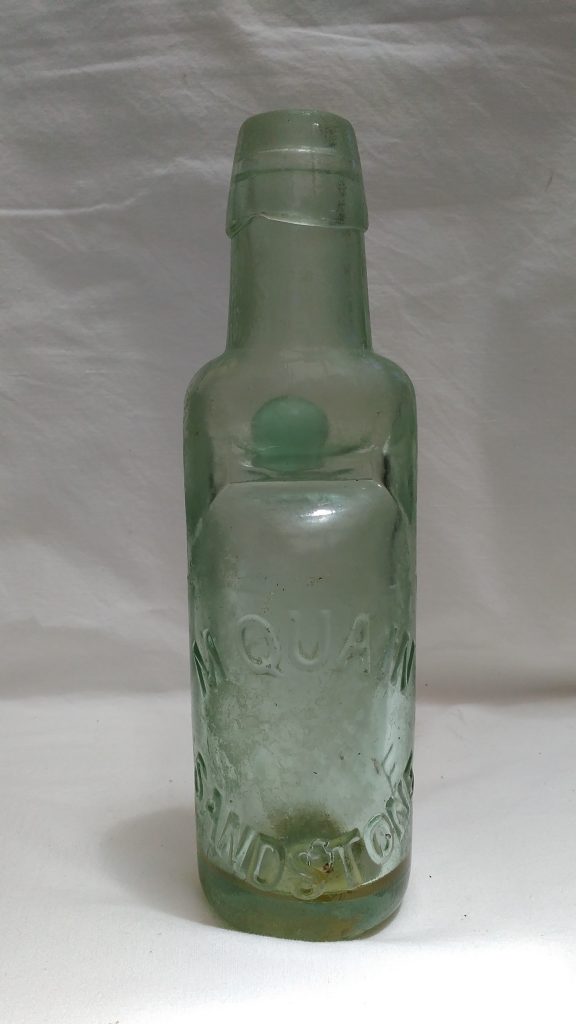 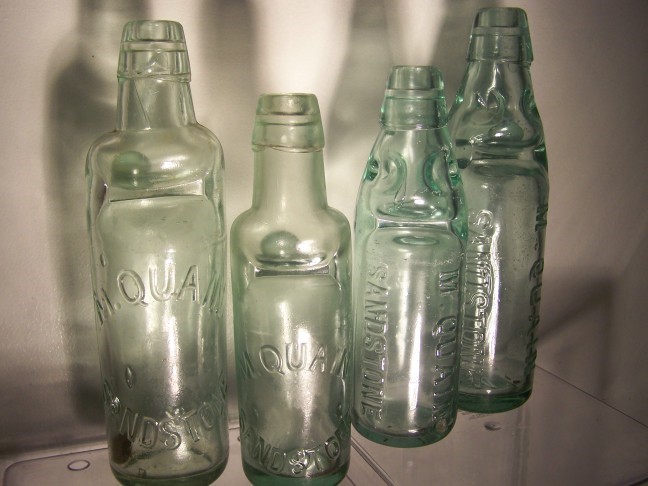