Irish immigrants John and Mary McAlinden arrived in WA in 1859. John was a police Constable in Fremantle on arrival, before moving to Bunbury. He resigned in 1870 & became a publican at Blackwood River. He and wife Mary had 11 children, 3 girls and 8 boys including their 1st born twin girls. Fourth son Frederick Patrick was born in Minninup in 1873 & 8th son Edward Nicholas arrived 10 years later in 1883 at Collie River. These two sons became aerated water manufacturers at Bridgetown & Greenbushes.

In 1888, Frederick Patrick McAlinden moved to Bridgetown where he married Josephine O’Toole in 1901. Sadly, she died the following year aged only 21years during pregnancy as did her stillborn son. Frederick remarried at Bunbury in 1904 to widow Lily Cecelia Veale. Lily had 2 children, 10 year old, Frederick Abraham Veale and seven year old Esther Rose Veale. Before his marriage to Lily, Frederick was already producing aerated waters in Bridgetown for the growing community. By 1912, his step son Frederick Veale is working with McAlinden producing Lemonade, Soda Water, Lime Juice, Sarsaparilla, Raspberry Vinegar, Lemon Syrup etc.

F P & E N McAlinden’s Codd bottles are both Niagara Patents made by Cannington Shaw & Co, of St Helens, Lancashire, England, as were a lot of bottles in that era. Cannington & Shaw were one of the largest producers of marble bottles in England during the early 1900’s. F P McAlinden continued to produce aerated water’s at Bridgetown until the late 1930’s, whilst living in Steere Street. During the 1920’s his health deteriorated & he spent some time in Collie with the Veale family. The Electoral Rolls give his address in 1936/37 as Throssell Street, Collie, aerated water manufacturer. He died at Collie in May 1938 where his funeral took place. His wife Lily out lived him by 22 years, passing away at Bunbury in 1960.

Edward Nicholas McAlinden married Beatrice Linklater Brooks at Blackwood in 1907. His first advertisement for his aerated water factory in Walter Street, Greenbushes, appeared in the newspapers on 3 May 1905.  He continued to advertise until early 1909 although I believe he produced drinks here until 1914. I wonder if the brothers exchanged recipes as the two towns are not a great distance from each other. He specialised in Lemonade, Ginger Ale, Ginger Beer, Hop Ale and Sarsaparilla.

In 1914 he moved to Westonia with his wife and was employed in the mining industry. He remained here until 1915 then moved back to Greenbushes as a cordial manufacturer in 1916. In 1917 he leased the Bridgetown and Greenbushes Halls with W M Phillips and proceeded to show “movies” one night a week in the towns. He moved to Bulwer St, Perth in 1922 where he was a fruitier. However, about 1930 he moved to Bruce Rock as a clearer and then he and his wife Beatrice moved to Mount Palmer as a shopkeeper. Edward stayed at Mount Palmer until 1943 and Beatrice lived in their home at Leederville in that year. He died suddenly in Perth in August 1952 aged 69 years. He is buried in Karrakatta Cemetery. His wife Beatrice remained in her home in Leederville until the late 1960’s and passed away in October 1977 aged 93 years.

F P McAlinden’s step son Frederick Abraham Veale was a labourer after his return from WW1 and worked in the timber mill industry. He died at Yarloop in 1966 and is buried in Bridgetown Cemetery. 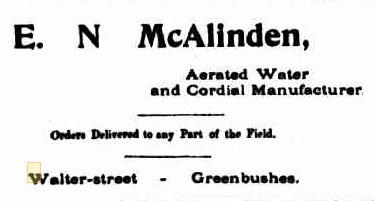 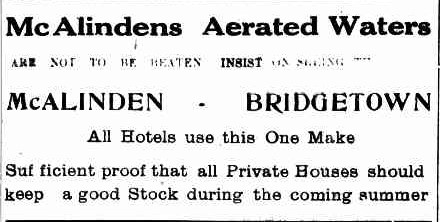