Ernest John Myers (1877–1945) and Arthur (Jacob) Myers (1879–1949) were two of six children born to Alexander and Mary Myers of Queanbeyan NSW. When Alexander passed away in 1882 he was described as a Soda Water & Cordial Manufacturer in partnership with Edwin Land both of Queanbeyan. At his death Alexander left his wife and six children under the age of nine. Abraham Myers, brother of Alexander was also a Soda Water & Cordial Manufacturer during the same time at Queanbeyan.

In 1898 brothers Ernest and Jacob accompanied by uncle Abraham arrived in Perth.
In 1899 at the young ages of 22 and 20 (respectively), Ernest and Jacob made an Application and registered the “Brolga Brand” trading as Cordial, Vinegar and Sauce Manufacturers. (see registered Trade Mark).
The first listing of E. & J. Myers in 1899 shows them as Importers at  216 Lake Street, Perth.
By 1900 they were listed as Cordial Makers and again in 1902 shows them as Cordial Makers and Aerated Water Manufacturers of 89 James Street, Perth.
This premises was located on the south side of James Street near the property known as “Paddy’s Market”.
At the same time E Myers resided at 218 Lake Street and J Myers resided alongside at 216 Lake  Street.
It appears that the manufacturing business was conducted at 89 James Street, Perth as the Lake Street addresses were in a residential area close to Forbes Road.
The Myers did not own any of the premises described but records show they occupied those sites.
They certainly would have learnt their trade from uncle Abraham.

On the 5th January 1901 there appears a newspaper article – “The Brolga brands of Tomato, Worcestershire Sauce & all Cordials bearing the “brand” are manufactured by Messrs E. & J. Myers of Lake Street.
The firm started business here some three years ago and their goods have, it is claimed grown so much in public favour that their business is growing daily.
The firm declares that this is attributable to the fact that it has always been their aim to use only the very best ingredients in all goods put up by them”.

In 1905 Ernest J. Myers is also listed as being at the Freemason’s Hotel, Newcastle (Toodyay 1911).
The year 1906 is the last record of E. & J. Myers Cordial Makers at 89 James Street, Perth.
On the 26th September 1906 there appears a newspaper article –
“E. & J. Myers Vinegar. Warning to Public. Where certain vinegars have been lately sold to storekeepers under labels resembling the white & gold and gold & green labels used by Messrs Ross & Co for their celebrated fine table vinegars. The public are cautioned that Ross & Co Vinegars are sold under labels bearing the name E. & J. Myers with a representation of their trade mark (the Brolga Bird) & none others are genuine. Storekeepers are warned not to sell Vinegars  (not being Ross & Co) in bottles resembling their labels”.

In 1907 Ross & Co, Cordial Makers are listed as occupying premises at 103 James Street, Perth, the location of which appears to be slightly to the west of the Myers premises.
The first Wise’s postal listing for Ross & Co is 1893-1894 as manufacturers and importers having commenced business in 1892.
They are variously listed as producing jams, preserves, sauces, pickles, essences and cordials in Packenham Street, Fremantle.
In 1907 Wise’s directory still lists the company at 95 Packenham Street and 219 Dugan Street, Kalgoorlie trading as coffee & spice millers and confectioners.
There then appears an advert also in 1907 for an auction for Ross & Co confectionery machinery.

There appears to be no further listing of Ross & Co in Western Australia after 1907 and the Brolga Brand seems to have ceased as a trade mark in Western Australia.
Ernest J. Myers is associated with the Freemason’s Hotel, Newcastle from 1906 to 1909 then he is briefly farming at Newcastle before Wongan Hills and Goomalling for several years.
He conducted the Muntagin Hotel for 3 years before his death in 1945.
Jacob Myers lived in Northam for several years before retuning to Perth and passing away at Mt Hawthorn in 1945.
Uncle Abraham Myers (JP) became a pioneer farmer at Wongan Hills before returning to Perth.
He passed away in 1925.
It is interesting to note that Myers Cordial & Preserving Co operated out of 106a Roe Street, Perth from 1921 to 1924.
It is also interesting that both Jacob and Abraham lived in Perth at that time.
There is no indication of any other Myers family member being associated with the business in Roe Street so it may be safe to say that either or both Jacob and Abraham were running that business.
The Brolga Brand does reappear in Rockhampton, Queensland.
There is an extensive report in the Morning Bulletin Rockhampton 16th September 1922 which commences as
“It is just over 9 years since Messrs C.F. Edwards & P. Murphy entered into partnership and launched the Premier Aerated Water Works.”
It appears that around the time of 1922 Edwards & Murphy first registered Brolga Brand for vinegar and sauce.
Adverts throughout the 1930’s show them producing Jams, Tomato and Worcestershire Sauces.
The Brolga Brand of Edwards & Murphy was still active in Rockhampton in the early 1950’s.
Their pictorial two tone crown seal ginger beer remains a rare Queensland ginger beer keenly sought by collectors.
The iconic pickle jar heavily embossed E. & J. Myers Perth WA and showing a large M on the base is made by Melbourne Glass Works and will turn light purple.
It remains a highly sought after pictorial jar around Australia. 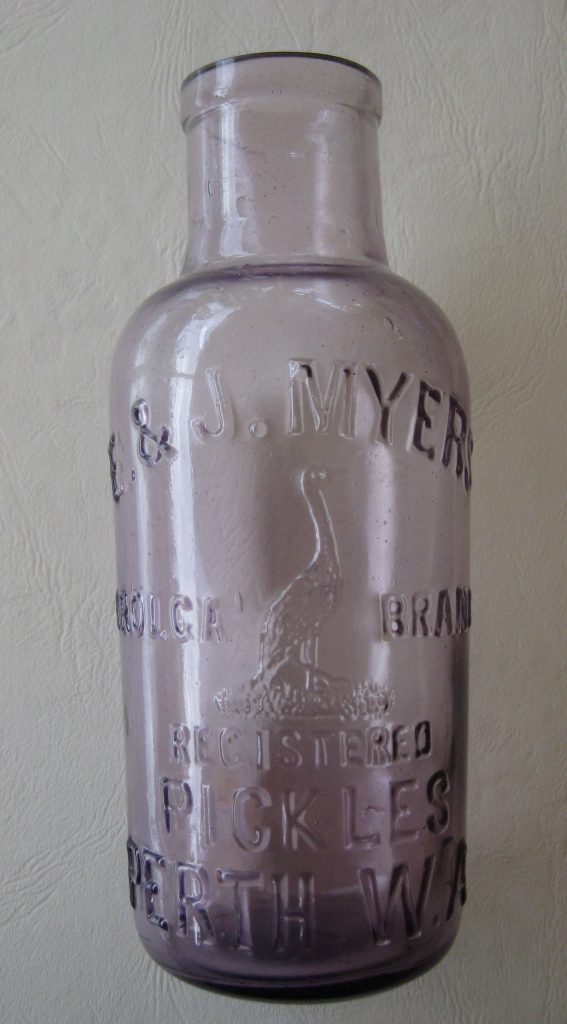