This extensive company had factories in Melbourne, Victoria particularly in the Footsgray industrial area.
They expanded their business throughout Australia and were seen in Perth as early as 1909.
They traded and advertised under the names Cuming Smith & Co Melbourne or Cuming Smith & Mount Lyell Farmers Fertilisers.
They traded with the “Sickle Brand” Trade Mark synonymous with many of their products.

Based at North Fremantle in Rocky Bay they distributed phosphates, fertilisers and chemical products right across Western Australia.
Head office was based at 319 Murray Street, Perth between King and Mulligan Streets. (See – Telford Perth).
By 1934 – 1935 the Cuming Smith & Mount Lyell Farmers Fertilsers Ltd main office was in St Georges Terrace, Perth with works at Bassendean, Fremantle (Rocky Bay), Geraldton and Bunbury.
The fertiliser company continued to operate within Western Australia till notice to cease business was recorded in February, 1949. Robert Telford was still the agent for the company at that time.

The Demijohn: The company had a range of impressed demijohns.
This example is a three gallon salt glazed ceramic embossed on shoulder Cuming Smith Co Proprietary Ltd Perth circa 1910 -1920.
Made by Bendigo Pottery this demijohn is one of the rarer demijohns showing the Cuming Smith name.
Significance: Demijohn – Rare 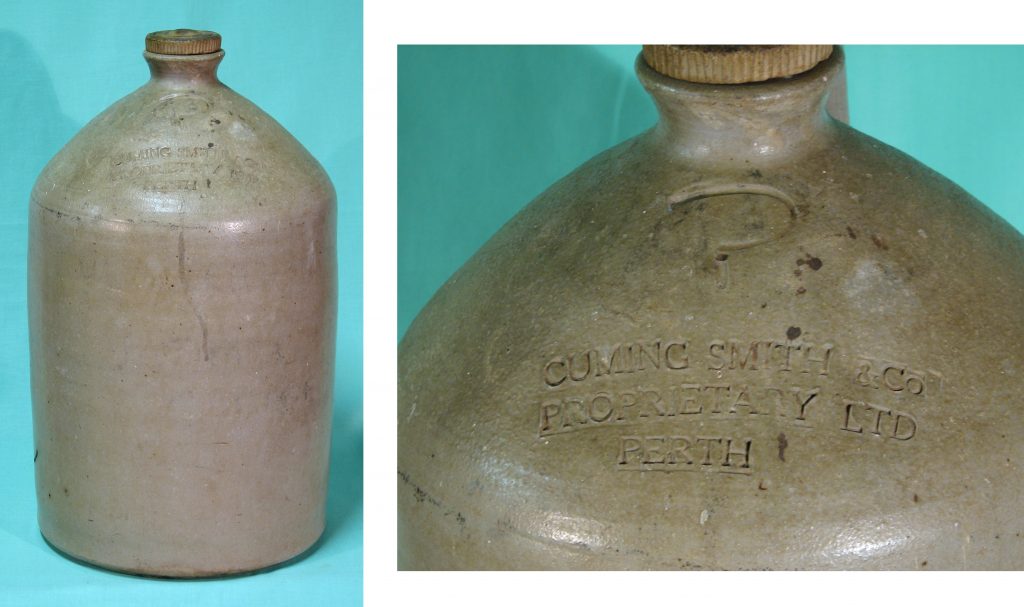