The Beverages Company (Moore Bros) started in a premises at the rear of the family home at 114 James Street, Perth around April, 1912 where Robert Moore was seen as the Manager of Beverages Ltd.
He was born in Perth in 1888 and brother Albert was also born in Perth in 1892.
Father Joseph was born in Perth in 1857 and his early trade was coachman and blacksmith.
In 1908 he opened an aerated water factory at 106 Roe Street, Perth and traded there till moving the business to the family property in James Street during 1912.
Advertising in December, 1912 showed Beverages Ltd as brewers of pure Hop & Ginger Beer, R. Moore Manager.

On 6th February, 1912 The Shamrock Aerated Water Co. registered with a Capital Investment of £5000.00.
This was the company Gibson and Starr trading as “The Shamrock Cordial Company” and they operated out of the front building at 114 James Street, Perth.
The owners were John Gibson and Robert Starr.
Shamrock used a Trade Mark incorporating a Flag and Unity hand shake for their aerated waters.
The Gibson & Starr factory acquired the rights to the Shamrock Factory during 1914.
The Moore family utilised a large variety of stone ginger beer bottles, some embossed J. Moore (Joseph), some Moore Bros. and some Beverages Company (R. & A. M.) Robert & Arthur Moore.

The Moore’s also traded as the Shamrock Cordial Factory obviously once Gibson & Starr ceased trading.
The family companies of Shamrock and Beverages Ltd operated from the same address till around 1930.
The Bendigo Pottery Factory made for them 6480 (45 gross) Shamrock dump crown seal ginger beer bottles between September, 1914 and May 1922.
Later, Bendigo Pottery also made 720 (5 gross) champagne shape ginger beer bottles for them in February, 1926. 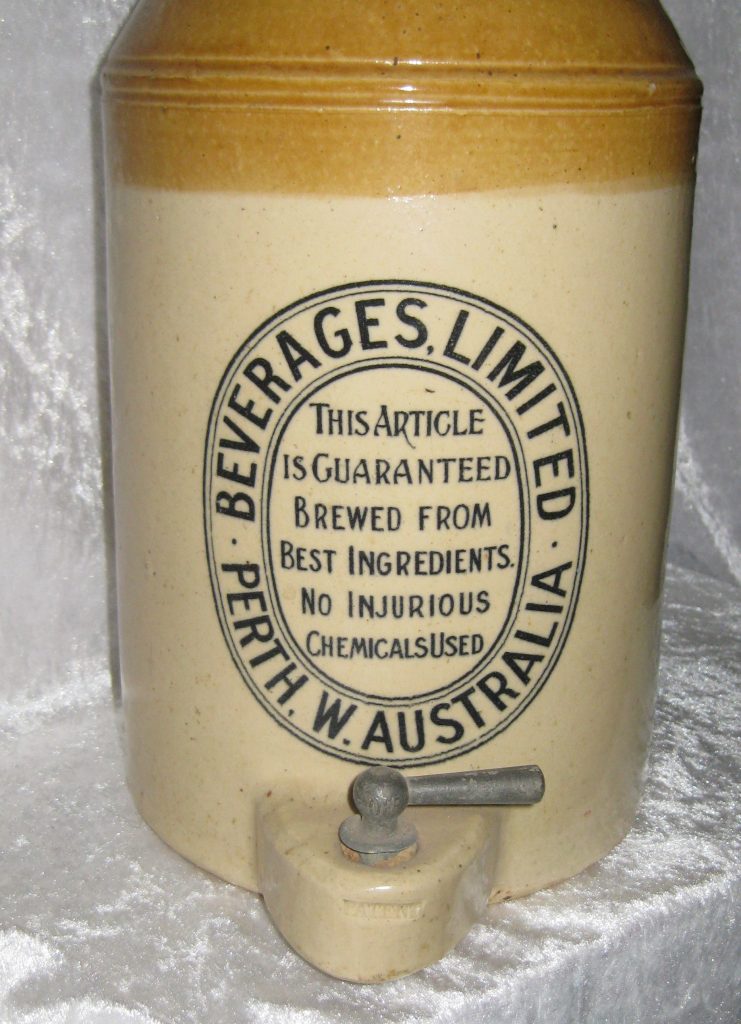