The Managing Director of the Perth Aerated Water Company was Richard Henry Barugh. He was born at Beeford, Yorkshire, England in 1849. His father William was a successful farmer of over 500 acres employing 11 labourers and 5 boys on his property “Beeford Grange”. His son Richard, was the 3rd of 6 sons and 3 daughters. Richard married Maria Barugh at Bridlington, Yorkshire in 1871 and by 1881 was farming at Thwing and caring for his widowed mother, while wife Maria and their 2 year old daughter Brenda, lived with relatives at Boynton. Daughter Doris arrived in 1885 and he and Maria and 2 children arrived in Fremantle on the “Menmuir” 23 January 1887.

From 1887 till 1894 I can find no mention of his occupation in Perth but did find he journeyed back to England from Melbourne in August 1893 and by 1895 he had returned and is the Managing Director of the Perth Aerated Water and Bottling Company with the Trade Mark BCD. It was at 29 William Street, Perth in Dalgety’s buildings and advertisements state, he had many years experience in the manufacture of aerated waters.  He was a farmer in England and maybe on his arrival in WA, he served an apprenticeship with an early WA company to gain experience.

In 1895 he applied for a trademark with BCD in a sideways diamond in respect of beer, cider, wines, spirits and liquors. Other trade marks registered included Kalaine Bitters in respect of aerated waters and bitters and Viceroy Champagne in respect of aerated waters. A gallon licence for the premises was also obtained and they delivered drinks locally by horse and cart. The factory machinery was of the latest design with water carefully filtered & they were reputed to use bottles much larger than those used by other companies. Was this just a ploy to encourage customers to buy his product.

Richard also had other interests including donating a white fronted heron and beetle to the WA Museum and a parcel of books to the new Fire Brigade library.

By the following year, 1896, a stockroom was added and 2 hop beer and ginger beer brewing machines & other appliances were fitted to the new extensions. Their filtering tanks helped to clean Perth’s cloudy water & besides aerated water drinks, mineral waters were also produced.

In 1898 a controversy arose regarding the quality of aerated waters in Perth as Perth water was under scrutiny by the Government analyst experts. Mr Woodward, the Colonial analyst for the time, certified the Lemonade, Tonic Lemonade and Ginger Alewere of suitable standard for consumption but Richard Barugh decided to get Dr. Jameson to conduct tests as well, which did prove the company filtering process was of the highest standards. The public was now assured of drinking an acceptable product.

In 1904 the company relocated to 166-168 Wellington St, Perth and Barugh was still at the helm of this large company and living in Havelock St, Perth. Now in addition to their usual soda water bottles, they were filling a large quantity of corked black pint bottles with aerated waters suitable for picnics & country customers. Do collectors have any of these BCD bottles?

In August 1907 Richard Barugh became the sole proprietor of the company. I have not found any records to state who owned the company when Barugh was the Director from its inception in 1895 till 1907. The BCD bottles are numerous.

The family took a holiday to England in 1914 and by 1917 the industry had changed with the coming of the motor vehicle. Two of the company mares were advertised for sale, suitable for a lorry or farm. He advised the public, in March 1920, he had sold the business in Wellington St, to BCD & Piesse Ltd. He and wife Maria were moving to New Zealand. The company under his leadership had survived 25 years including a period during WW1 when sales must have dropped due to the men being overseas etc.

His daughter Brenda married farmer Leonard Hatton of Nungarin in Perth in 1920 whilst daughter Doris married A G Young & went to live in New Zealand. Richard Henry Barugh died on 24 January 1933 aged 84 years, at his residence in Auckland and wife Maria died on 5 Oct 1928 and they are both buried in Tamahere Cemetery, New Zealand.

BCD & Piesse, advertised in April 1920, a month after they had bought the business that alterations and renovations were to be done to the premises in Wellington Street and therein is another story.

Many collectors have put forward suggestions for his Trade Mark BCD. Did it mean—Better or Best Cool Drinks or Barugh Cool Drink or one collector, once mentioned it was Barugh, Collins and Donaldson. As Donaldson and Collins were producing cool drinks at the same time, I feel this may be incorrect. Will we ever know? 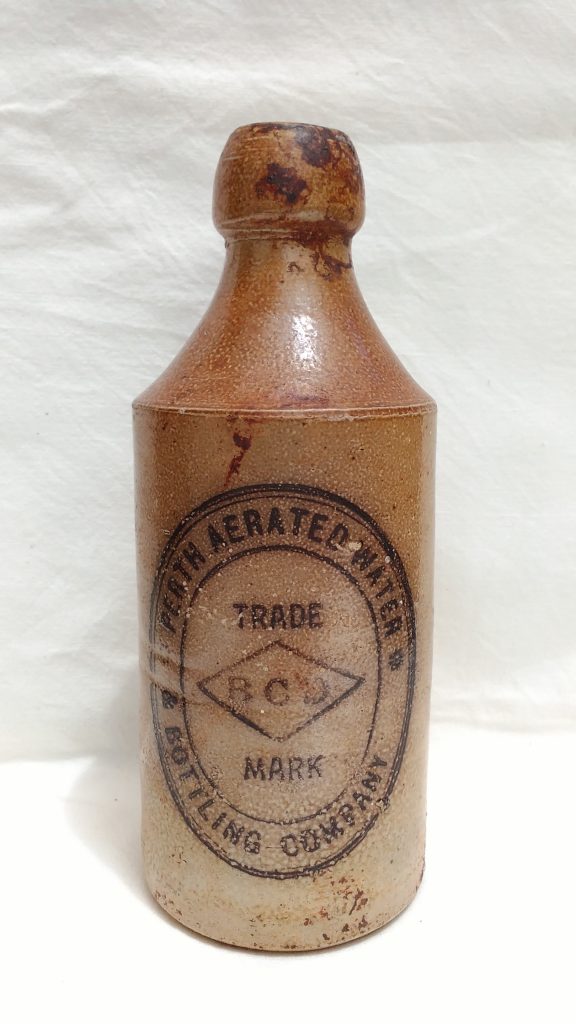 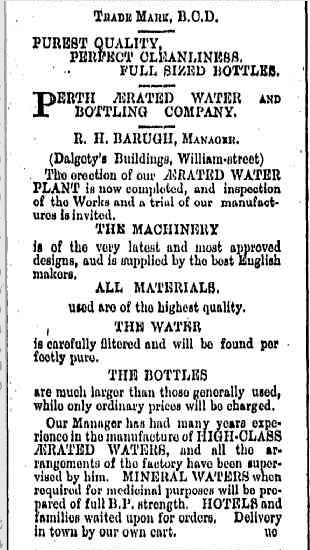 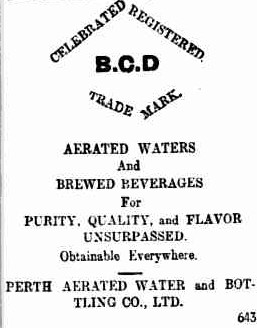 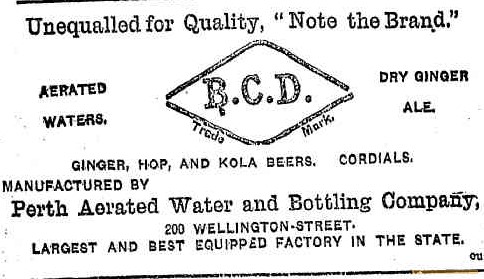