Leonora is situated 833km north east of Perth and north of Kalgoorlie in the Mount Margaret and Malcolm goldfields. The townsite was gazetted on 15 Apr 1898 and even earlier, many blocks had been sold and buildings erected, even if some were only made of hessian and iron. Wises Post Office Directory lists the first manufacturer of cool drinks as HENRY C HENRICHS in 1898.

HENRY CHARLES HENRICHS arrived in WA in the early 1890’s. In 1895 he was involved with a Prospectus for the WA Exploring & Prospecting Syndicate, with a capital of 1,000 pound. The manager was Henry Henrichs Esq, late of Bendigo Victoria and the leaders of the expedition were P Blake a well known mining expert, from Maryborough, Victoria and H Henrichs Esq whose office was situated in the Perth Club Buildings, Howick St, Perth. C H Henrichs was the Treasurer.

By November 1896 a Charles Henry Henrichs, barman, single and residing in Coolgardie applied for a Wayside House Licence for a building 12 miles from Coolgardie on the Menzies Road. He and partner John Murdoch opened the Welcome Inn at Bummers Creek between Niagara and Mount Margaret, and by Xmas 1897 they had erected a hotel with windows overlooking a racecourse, cycle track, plus a vegie garden, flowers, stables and had poultry. They also organised a sports day to raise funds for the Hospital at Malcolm on these grounds. H C Henrichs left the business in January 1898 and in March he transferred the hotel licence to partner, John Murdoch and erected an aerated water factory in Tower St, Leonora.  His Pioneer Aerated Water Factory had the latest aerated water plant delivered to Coolgardie for transport to Leonora and he employed a man to produce the drinks. By July the large factory was in full swing and he settled into many public positions in the town including the hospital committee, jockey club etc. His factory advertised that large bottles of cool drinks would be available for 3s per dozen and the splits were 2s 6d. per dozen. In Feb 1900 his PIONEER AERATED WATER FACTORY on the corner of Tower and Forrest streets operated in Leonora as did C A Andresen’s EUREKA BOTTLING WORKS also in Tower street.  However, he and fellow business man, Christian Alfred Andresen sent a complete aerated water plant to Mt Morgans where arrangements were made for them to set up a business together. H C Henrichs factory operated under his name in Leonora until June 1900 and his special drinks included Hop Beer, Ginger Beer and Tonic Ale. In March of that year he had formed a company to operate a livery stables on the lower end of Tower street and had horses for hire.  In July he was honoured with a reception where he received a gold medal as a token of appreciation for his service to the race club. The towns people also gave him a sovereign case as he was now leaving to reside in Mt Morgans. When he arrived in Leonora, he found it hard to buy a block of land but eventually he was successful and his business added improvements to the town. In August 1901 he was set up in Mount Morgan’s as the Eureka Aerated Water company. There had been a Eureka factory in Kalgoorlie but owners Joseph Samuel Solomon and William Henry Dancker put this factory up for lease or sale in April so I expect Henrichs and Andresen could now use that business name for aerated waters as I believe the earlier Eureka business in Leonora had been for bottling beer, ales etc. However, Henrichs tenure here would be brief as by October 1901, George Thomas Davis had taken over the business and installed W L Davis as the manager. Footnote – In the early days, Pioneer Aerated Water/Cordial/Works/Factory was the name given to many  cool drink premises by the following men in the towns mentioned – 1894 Heidepriem and Zabel at Coolgardie, 1896 J Jackson purchased the factory owned by J Curran & Co at Kalgoorlie, 1898 H Walsh of Menzies leased a factory, 1898 William Hynes of Cue, 1901 W J Foster,  Phoenix St, Mt Morgans and 1903 Daniel O’Brien at Lennonville.

I could not find the whereabouts of Henry Charles Henrichs anywhere in the newspapers in Australia after he left Mount Morgans.

THOMAS HODGES – aerated water manufacturer, Leonora 1901 (Wises Post Office Directory)– I could not find anything about this gentleman in the town. One article in the newspaper, 8 Dec 1897 West Australian, mentioned the Eureka Aerated Water Company will not be responsible for any debts incurred by any person without the consent of Thomas Hodges. Money owed, only to be paid to Hodges. However, no mention is made in the ad, where this factory was situated and there is no mention of the Eureka Factory at Leonora until 1901. Did he work for Henrich or Andresen as there is no mention of a factory under the name of Thomas Hodges? I did find Patrick Green had the Eureka Bottling Company on the corner of Lord and Moore streets in Perth in Feb 1898 and a Thomas Hodges had lost a dog and for the public to return same, to this address. From that newspaper article I assume Hodges worked with Green at the time in Perth and the Eureka Notice in 1897 was for his time there.   No Electoral Rolls exist for years before 1903 so I can’t find his occupation although I did find a Thomas Hodges for Moore Street in Wises Directory and he had a laundry. A marble bottle exists with the wording Hodges & Green, Eureka Bottling Co Perth WA with 4 dimples and 235mm in size. One example has M for Melbourne on the base.

THOMAS KELLEHER – He was born in Fitzroy, Victoria in 1845 to Thomas Kelleher and Margaret nee Geary.  Kelleher junior, owned the Malcolm Brewery in 1897. He advertised the business “To Let”, in May 1898 and brewed 1st class malt ale which was available by bottle or in bulk supplies. In July 1898 he wanted a partner to join him in a small brewery at Leonora and he had stock and plant ready to commence brewing.  By Xmas 1900 he had a small soda water machine for sale and bottles if required as he was making room for a larger machine. In August 1901 he advertised the business “To Let” and had 5,000 dozen ale and porter bottles included in the deal. He advertised a soda water machine with all appliances, complete, for sale and apply to him at Lawlers, in Dec 1902. His factory in Lawlers was near Cobbs Offices so I believe he had two premises, one at Lawlers and one at Leonora as in May 1904 he put his Leonora aerated water business up for sale.  In 1906 Thomas Kelleher was working on a mining lease called “Monte Christo”. He wanted someone to buy his ¼ share in Hann’s mine near Laverton in March 1910.  The Electoral Rolls list him as a cordial maker at Laverton 1910- 1914. He died in 1914 at Fitzroy, Victoria and in his Probate, he left a small legacy to Henry Gregory and his name is given as Thomas Patrick Kelleher commonly known as Thomas Kelleher and formerly of Laverton and late of Fitzroy, Victoria. In Kyneton, Victoria in 1862 a Thomas Kelleher had the Victoria Hotel and in 1868 he had a cordial factory in Market street which I believe was his father.

DANIEL JOSEPH MEADE – He was born in Queensland in 1870 to soda water manufacturer Murtagh Meade and his wife Ellen nee Nash. He arrived in WA in 1896 and by 1901 was the handicapper for the Leonora Jockey Club. In October of 1901, he is proprietor of the Eureka Aerated Water & Cordial Works in Tower st, Leonora. The aerated water building that he rented was listed for sale in Oct 1902, including the water right, machinery and all plant, although ads appeared until 4 Apr 1903.  By Xmas 1902 his new aerated water business was in Star Street, Malcolm also using the name Eureka. In 1903 he resigned from the Jockey club at Leonora and in January became secretary of the Kookynie Turf Club but by February he had resigned and he then took up duties in 1906 at the Kookynie Swimming club. His occupation in the Electoral Rolls is listed as Mill man, Kookynie in 1906. He then moved into the Hotel trade having the Duke of Cornwall in Kalgoorlie in 1919, Kalgoorlie Hotel in 1920 at Kalgoorlie, plus the Kalgoorlie Hotel cnr Wellington & Lord Streets, Perth on 8 Dec 1921, when he lived in Charles St, W Perth. He transferred the hotel licence to Frederic Coleman of Belmont, on the 6 March 1922. In August 1929, he purchased Eddy & Lancaster’s aerated water business in Spica St, Southern Cross and also became secretary of the racing club. His last ad for Southern Cross was in the Southern Cross Times, 11 Jan 1930. In 1943 he was a barman at the Fimiston Hotel and died in Kalgoorlie in 1944. I believe his father Murtagh Meade became insolvent in Queensland and set up in Coolgardie as Lancaster and Meade (Federal Cordial Works) in Dec 1895, using the name Mortimer Meade. Murtagh (Mortimer) Meade died in a shunting accident in the rail yards in Kalgoorlie in 1903. 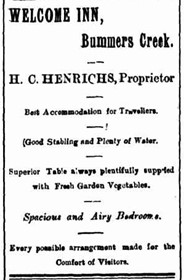 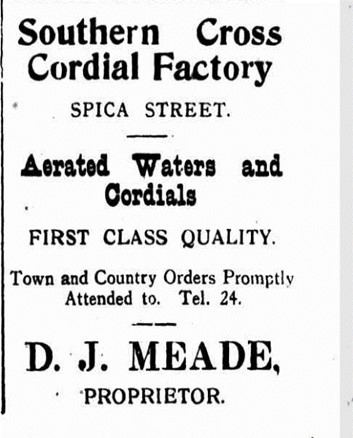 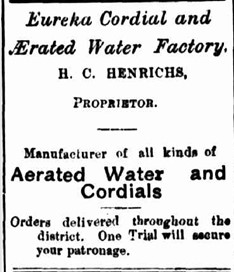 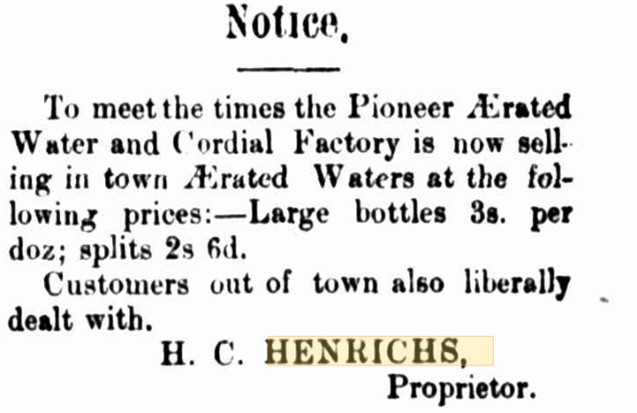