DANIEL O’BRIEN was born in Liverpool, England in 1870, the son of parents who were born in Ireland. By the early 1890’s he had made his way to Geraldton, Western Australia. He married Winifred Catherine McDonnell at Northampton in April 1893. I believe he may have been in partnership with John H Gordon, in a tent and tarpaulin business in Marine Terrace, Geraldton, as mention is made in 1917, that he had served a 12 month apprenticeship as a sailmaker. The partnership was dissolved on 11 May 1895. O’Brien then made his way to the MURCHISON GOLDFIELDS and settled at Cue with his wife. Here he met GEORGE HENLEY, once owner with William McDonald Chalmers of the “Lily” mine. They had arrived from Charters Towers to mine in the west. HENLEY and CHALMERS sold their very profitable mine in September 1894 to John Radford Streeter on behalf of an English syndicate for the large sum of £6,000. Henley was also chairman of the Cue Progress Association. In 1897 he returned to Victoria for a few months holiday & on return suffered ill health. Meanwhile, DANIEL O’BRIEN & Co was a wholesale and retail dairy and produce merchant in Austin St, Cue. He was also the sole agent for Perth Refrigeration & Ice Co. This business continued until December 1899. O’Brien then moved to the rapidly growing mining town of Lennonville.

LENNONVILLE is 13 km’s north of Mount Magnet and it was also known as the 8 mile. Some buildings had been erected here as early as 1896 but the township was not gazetted until 30 September 1898.  W M HYNES had an aerated water business in Cue called the Pioneer Aerated Water Company but his last ad in the Murchison Advocate was on 27 May 1899. In February 1902, HENLEY & O’BRIENS aerated water factory was situated in Wray Street, Lennonville and it was given the same name. O’Brien purchased block Lot 62 here in July, for 24 pound. In 1903 the PIONEER cordial & soda water business was now only in the name of O’Brien and he was also agent for the Port Brewery in Fremantle. GEORGE HENLEY may have returned to the eastern states as he is no longer mentioned in the area. In January 1904 a fire broke out in O’Brien’s residence when a cat knocked over a kerosene lamp. Mr Stonehouse and others helped to extinguish the flames but the contents of the room were destroyed. By April, he was sole agent for the Stanley Brewing Co Ltd of Mounts Bay Rd, in Perth. In August he had sold his business to MRS ELIZABETH LOUISA STONEHOUSE and he now applied for a Publican’s General Licence for the GOLDFIELDS CLUB HOTEL in Lennonville. It was made of wood and iron, like many of the buildings in the town and consisted of 6 bedrooms, 2 sitting rooms, bar, dining room, kitchen and billiard room. It was rented from J V Kearney. He held the licence until 17 February 1905 when he transferred it to Battista Fongo.  Disaster struck the town in July 1905 when half of the buildings in the main street were engulfed in flames with the loss of the Burra Burra Hotel, John’s restaurant, B Fongo’s barber shop, Kissacks office, Lewis and Book’s draper’s shop, a vacant shop and the residence of Mr Taylor. At this time 100 miners were unemployed so this was a significant set back for the town and many changes would soon alter the conditions of the residents. In 1906 O’Brien’s home was situated in Occidental Street. In 1909 he and wife Winifred moved to Mount Magnet and he gave his occupation as cordial maker on the Electoral Rolls. In 1913 the Health Inspector visited his cordial factory and “it was much improved” since his last inspection. The factory suffered damage in 1916 when a tornado tore through parts of Mount Magnet.  I have not found reference to the name of his factory here. He enlisted in WW1 in April 1917, even though he was 47 years of age. He travelled to Blackboy Hill near Midland Junction and the eastern states but was discharged as being over age. He then moved to Bungar Station 130 miles from Wubin in the 1920’s and put the property up for lease in 1930.  After the death of his wife Winifred Catherine O’Brien at Victoria Park in 1941, he married Emma Mitchell in Perth in 1945. Daniel O’Brien died 3 Oct 1949 in Perth and of Walliston. Daniel and Winifred are both buried in Karrakatta Cemetery.

STONEHOUSE – The Stonehouse family of JOHN WILLIAM TURNBULL STONEHOUSE and his wife ELIZABETH LOUISA nee MICHEL were grandparents of a city antique bottle collector. John W T Stonehouse was born in 1856 at Newcastle on Tyne in England. His father Christopher was a watchmaker/ jeweller and when John was 15 years old, he became his apprentice. John arrived in Australia in the late 1870’s and took out a Hawkers Licence at Boxers Creek in New South Wales in 1878. In November of that year ads were placed in the Goulburn Herald and Chronicle under, “Practical Watchmaker and Optician”. He married Elizabeth Louisa Michel at Moss Vale on 10 Jan 1881 and by this time he was a watchmaker / jeweller in Newcastle. However, his business failed in 1882. The family moved to Western Australia and settled in Geraldton in the mid 1890’s. In January 1896, John was assistant to Simon Wolff in his watchmaker/jewellery store in Marine Terrace where John’s expertise in his profession was well known in the town. On 23 April 1898 John went into business on his own account in Marine Terrace, two doors down from the Geraldton Post Office. However, the lure of gold on the Murchison fields saw the family move to the progressing town of LENNONVILLE in late 1898. John set up business here and also visited the town of Mount Magnet each Monday with his wares. There were now about 500 people seeking gold at Lennonville and businesses began setting up in the town. John and Elizabeth lived in Pogue Street, and by 1903 they had 10 children. Their eldest child Christopher Stonehouse, was born 1881 in Newcastle and Eleanor Tyne Stonehouse their 10th child was born at Lennonville in 1903. Another child was born in 1906. By 1903 the jewellery business was now in the name of Elizabeth Louisa Stonehouse and John was interested in civic affairs and was made Chairman of the local board of health and also a trustee of the Public Cemetery. Two years later in 1905 the PIONEER AERATED WATER FACTORY, once the factory of HENLEY & O’BRIEN, was now in the name of Mrs Stonehouse. However, because of her large increasing family she had a manager to run the business. Elizabeth was fined for operating a petroleum engine in the premises without a licence in August 1905. This new Inspection of Machinery Act had only been proclaimed recently. Son, CHRISTOPHER STONEHOUSE may have been the cordial maker but he is listed as a labourer on the Electoral Roll of 1903 and 1906 at Lennonville.  I have found DAVID SWANSON on the roll for 1906 and he gives his occupation as a cordial maker in the town. Unfortunately, I have no proof who produced the drinks. In 1906 an ad for settlement of all accounts for the jewellery/watchmaker business was placed in the local paper but the Pioneer factory continued, until the last ad on 28 November 1908. By this time the town was in decline and John William Turnbull Stonehouse had left his family to pursue interests in New Zealand. Wife Elizabeth, moved to Mount Magnet as did some members of her family and son Christopher who had married in 1908 to Margaret Grant and was living in Sandstone in 1910 and working as a fireman. Around 1912 they also moved to Mount Magnet. CHRISTOPHER STONEHOUSE was employed by WINTER BRANDT & CO aerated water company here. A representative of the MT MAGNET MINER & LENNONVILLE LEADER visited the factory in September 1916 and was given a tour of the premises and noticed the marble bottles were all made by a South Australian company. In November all the drinks were made by “tradesman” Christopher Stonehouse and Mr L C Hipper was in charge of the factory. In July 1917, Christopher was sent to Perth to buy new washing and sterilising equipment for the factory. In 1919 some of the Stonehouse sons had joined the war effort and served overseas and they also took over a greengrocery and confectionary business next door to the Federal Hotel in Mount Magnet. Christopher continued at Winter Brandt until 1922 and then in October, Elizabeth Louisa Stonehouse left for Kendenup in the South West and settled on Block 34. Daughter Eleanor was a music teacher here and son Christopher and wife also moved to this area.

As Christopher Stonehouse was the CORDIAL MAKER for WINTER BRANDT & Co, I presume he did learn the trade at some stage with Henley & O’Brien but the newspapers did not give a name for the cordial maker there or at Mrs Stonehouse enterprise in Lennonville. Eventually Christopher left the farming area of Kendenup and became a carpenter and died in 1958 in Victoria Park. John William Turnbull Stonehouse died in New Zealand in 1927 and Elizabeth Louisa Stonehouse passed away at Geraldton in 1935. Her married daughter Eleanor was living in Jose Street, Geraldton at the time.

All bottles belonging to the Pioneer factory at Lennonville had paper labels as no impressed bottles have been found for Henley & O’Brien or E L Stonehouse. 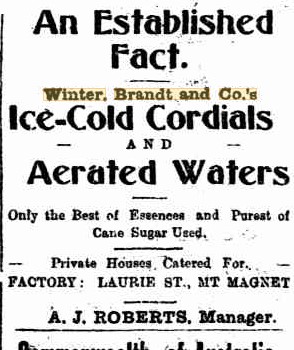 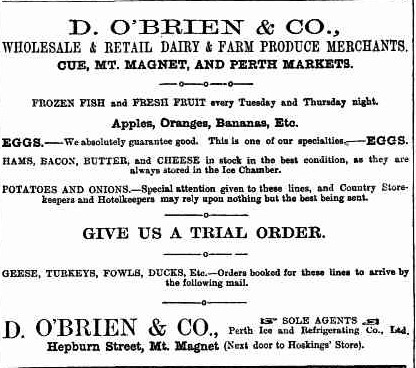 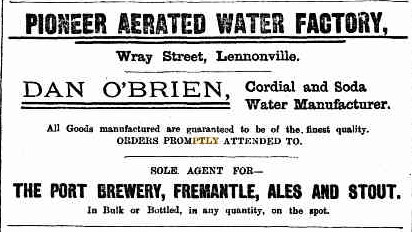 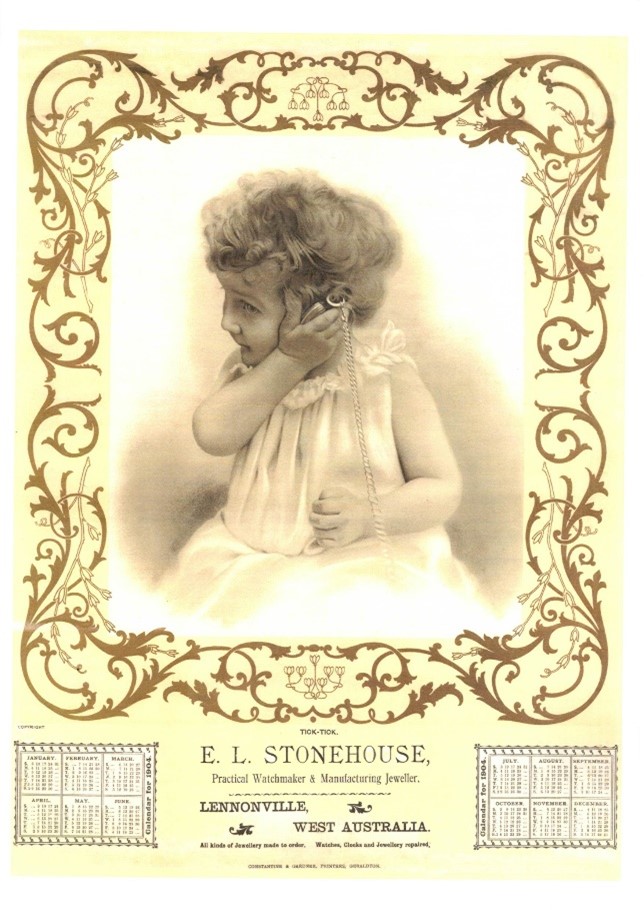 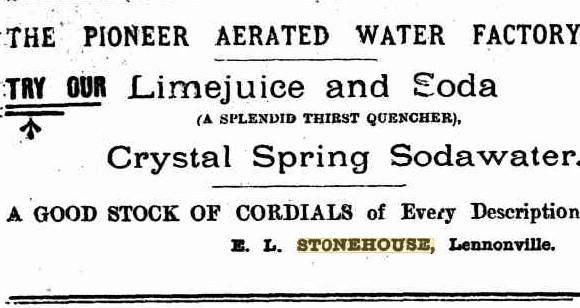