Pinjarra is situated approximately 84km’s south of Perth & was first settled in the early days of the colony. It was a very small town in the 1890’s & predominately a farming community with timber mills to the east and the fishing village of Mandurah to the west. There were two hotels in the town with the Premier Hotel near the traffic bridge over the Murray River and fronting Williams Road to Dwellingup. The Exchange Hotel was on George Street in the centre of town and was passed by the traffic journeying to Bunbury and the south west.

Wises Post Office Directory names DAWBARN BROS as one of the first aerated water manufacturers in the town in 1905. James, William, John, Mary and Katherine, children of the late aerated water manufacturer William Henry Dawbarn of Little Lonsdale street and Bay street in Melbourne arrived in the West in the late 1890’s with their widowed mother, Catherine. JOHN DAWBARN settled at Kanowna in 1898 where he was the proprietor of the Caledonia Cordial Factory. He had a Bankruptcy hearing in Nov 1898 and advertised the business for sale in 1901. His brother James David Dawbarn also lived in the town. Late in 1903 they moved to premises in Brown Street in East Perth. JOHN and his brothers WILLIAM HENRY DAWBARN and JAMES DAVID DAWBARN formed the company DAWBARN BROS in Brown Street. Their ads in 1904 featured the wording “The Ring is Broken at Last” and it featured a diagram of a broken ring. They had 30 years of experience under their late father William Henry Dawbarn in Melbourne. By 1905 the company was now named the Federal Mineral Water Works. Their last ad was placed in the WA Record on 17 March 1906.  John’s son, also named William Henry Dawbarn was also a cordial maker and on enlisting in WW1 lost his life at the Dardanelles in 1916. As Dawbarn Bros were no longer in business I wonder which local company employed William before he left to serve his country. In 1905, Dawbarn Bros were listed as being at Pinjarra although no ads in the local newspapers appear for this venture.

HERBERT ARTHUR LASLETT, formerly in the Police Force at Day Dawn in 1906 applied for a Wayside House Licence for the Exchange Hotel at Pinjarra in August 1908. This building was rented from his brother Henry Edward Laslett of Cottlesloe. In November 1912 he renovated the building and installed an aerated water plant. In August 1914 he wanted a man to wire the bottles and I believe about November DONALD HAY formerly of the Black Range Bottling Company and the National Hotel at Sandstone acquired an interest in Laslett’s cool drink business. Hay retired from the business in August 1916 and Laslett carried on, in his own name until July 1918. In February 1919, G H Jackson took over the lease of the Exchange Hotel. Laslett was also proprietor of the Bullfinch Hotel in the 30’s and died in Mandurah in 1938 aged 67 years. In December 1921 the building formerly occupied by the Exchange Cordial factory office, next door to Taylors store, now had Mr Clementson, hairdresser, in business.

JOSEPH GITTOS and JAMES ARNOTT. They were brothers in law and owners of a fruit case mill at Pinjarra which they listed for sale in December 1921. In January 1922 they began their Pinjarra Aerated Water factory on the corner of Forrest and Frederick Street’s, Pinjarra. Arnott was a silent partner and lived at Jarnadup in the south west. Their last ad appeared in the South West Advertiser on 10 August 1923. Gittos stayed in Pinjarra until 1925 then moved to Northam where he had a grocery and fruit business. He died at Manjimup in 1951.

CHARLES HARDEN NETTLE. He was a cordial maker at Norseman before his arrival in Pinjarra in December 1924. His brother Richard Leslie Nettle also produced aerated waters in Norseman and Kalgoorlie. Charles Harden Nettle purchased Gittos factory and his specialty was brewed hop and ginger beer. In November 1932 he improved the factory and continued producing drinks in town until ill health forced him to sell the business in April 1938. He moved to Canning Highway in Como and died in 1939.

ROY CHARLES STOCK.  Stock and his wife had lived in Pinjarra in 1931 so they were not  newcomer’s to the town, when they returned in 1939. Stocks wife Elizabeth had a business in Wellington street Perth in the late 1930’s and their other interests included the Gordon’s Hotel in Bunbury in 1936 and the Parkerville Hotel in 1937. The couple purchased Nettles factory in February 1939. He changed the name of the business from Pinjarra Aerated Water Factory to the Pinjarra Cordial Factory. He soon relinquished the business in July 1940 to take over the Railway Refreshment rooms in Katanning. He left there in 1942, spent sometime in England and passed away in Palmyra in 1961 aged only 51 years.

GEORGE PAYNE. He was previously employed by BCD & Piesse Ltd in Perth. He commenced making aerated waters in July 1940. He only stayed in business for two months before Joseph Carey became the new owner.

JOSEPH JOHN CAREY. He was the son of Merredin aerated water manufacturer, Arthur Ernest Carey and became proprietor of Pinjarra Cordial factory in September 1940. He married in Kalgoorlie in 1936 and had also been at Merredin helping his father in his business. He continued at Pinjarra until September 1942, where he enlisted and joined the armed services for action in World War 2. When he returned in1945 he was out of work and wanted work in his trade of aerated water manufacture.  In 1949 he moved to Big Bell with his wife Elsie Edith Carey, where he was a labourer. He passed away in Fremantle in 1999 aged 83 yrs.

Pinjarra had an Ice Works in 1954, tea rooms & two hotels etc but the aerated water industry had gone and the town now received its cool drinks from the city by train and carrier services. 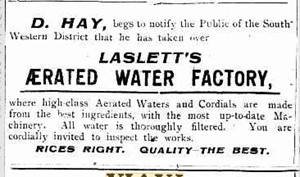 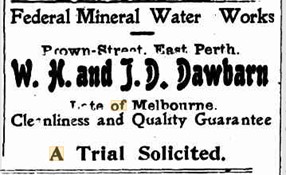 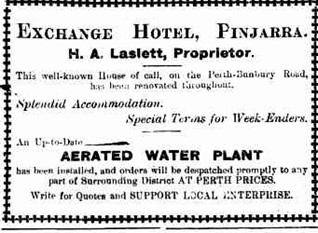 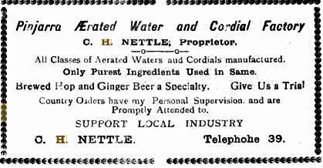